The 'phew, that's a relief but I had a great time' post

I'm indebted to VP for the title of this post. The days leading up to opening your garden to the public are nerve-racking, especially if the weather is not being cooperative. So it made me smile when she left a comment on my last post saying she was looking forward to the "phew, that's a relief, but I had a great time' post. It showed great confidence in me - which at the time I did not share.
I'm also indebted to the other blogging friends who made the effort to trail over here. There was Julia and her husband, Paul (below); Arabella Sock; Simian Suter and his missus, and Cleve West and his partner Christine, who were making their second visit. Cleve hardly ever has time to blog, so if you want to know more about what he's up to, it's probably best to go to his website.
I was so pleased to see them all. Obviously, not everyone can always make the opening, but it makes a huge difference to see friendly faces. It's exactly the sort of morale boost you need when you look out of the window five minutes before you're due to open and see that it is pouring with rain.
I'd like also to mention my friends Peter and Delphine, who have loyally turned out every year that I've opened. I'm so touched by their support. And my neighbour and gardening group compadre Ruth not only brings loads of friends, but lends me several kettles as well. 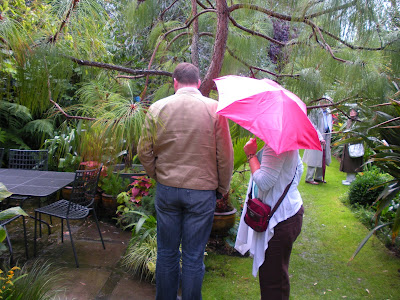 Family, of course, play a huge part. My daughter Nevada, below, and her boyfriend Charlie served the tea and cakes. All the cakes were baked by moi, except the rather stupendous raspberry gateau which was contributed by my friend Pamela Johnson, who not only makes rather gorgeous cakes, but is also a brilliant garden designer. 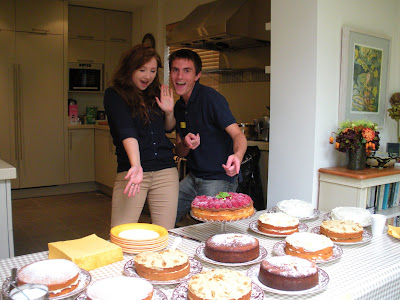 Here's Cleve taking a picture of the garden. I meant to take more pictures myself, but as usual, didn't manage it. 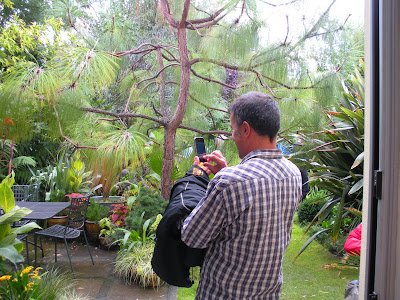 So, how many people came? And did I feel that it was all worth it? Well, we had 127 visitors, which was fantastic considering what the weather was like. (It did brighten up later, thank goodness.) Our record is 166, and the lowest number we've ever had is 92, last year, so I was absolutely thrilled. I haven't had the energy to count the money yet, but I think we made around £600, which all goes to charity. 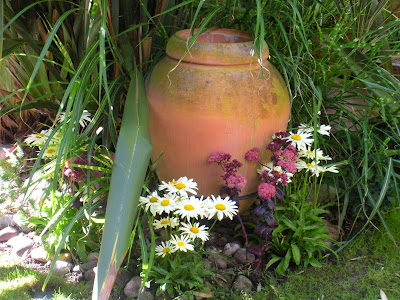 There is always the temptation to do a bit of last-minute "plonking", just to tart the place up before visitors arrive. I try to resist it, because there is a danger that a quick "plonk" can turn into a full-scale revamp. However, I think this "plonk" worked quite well. I'd bought the purple sedum from Crocus, but decided it needed something lighter as a contrast. These are Leucanthemum superbum 'Broadway Lights' and they really do light up this corner.

Posted by Victoria Summerley at 7:22 PM