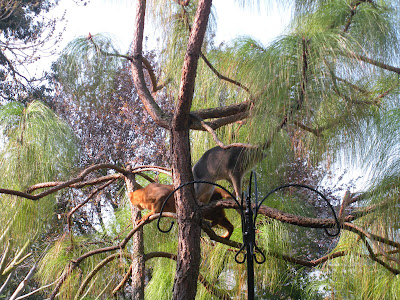 "Move your fat butt, Mario, this tree ain't big enough for the both of us" 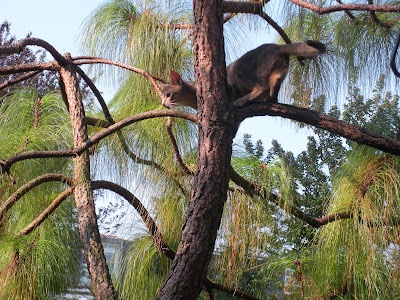 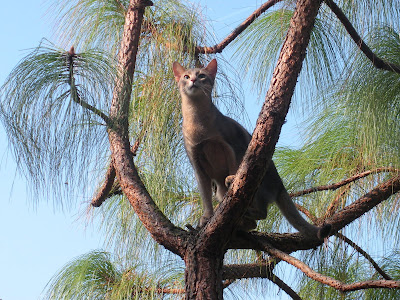 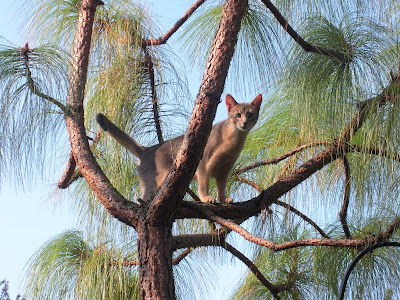 "If I do my cute look, do you think she'll give me extra food?" 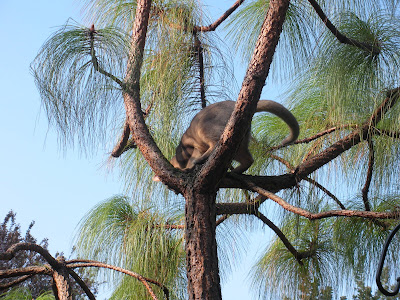 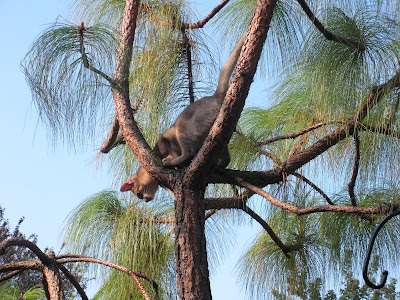 "Wait, is it really that far?" 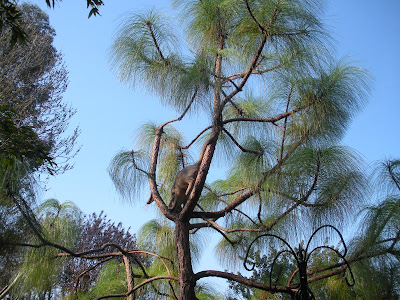 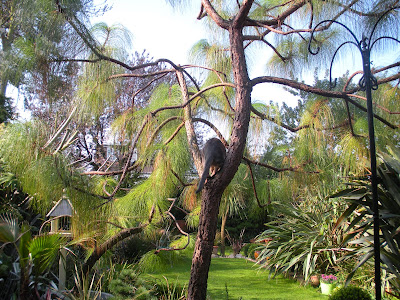 "Phew, that's better. I can see the ground now."
Posted by Victoria Summerley at 10:18 PM 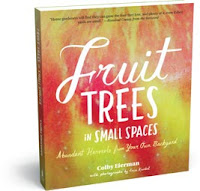 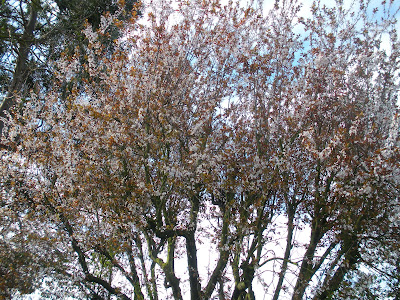 According to my friend Geraint Smith, former science editor of the Evening Standard, today is not really the first day of spring. He argues that it is 1 March, St David's Day (he's Welsh, needless to say), and that the season of spring consists of the months of March, April and May. The date of 20 March marks the vernal equinox, he says, not the start of spring. A not unreasonable argument.
Whatever, we all know that there have been signs of spring in the garden for a few weeks now. My cherry tree is in blossom, the Clematis armandii is in full floriferous regalia and you can almost hear the sap rising. 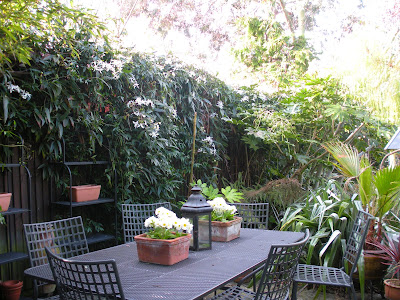 (Of course, most of the C. armandii is growing along the top of the fence and up other people's trees. I've never known an armandii that wanted to flower in its own garden. If you're thinking of getting one, plant it next door!) 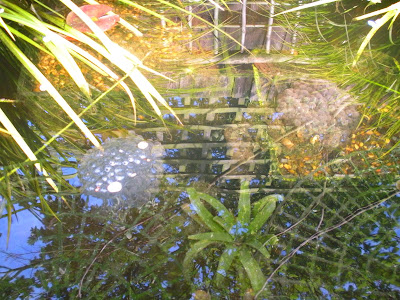 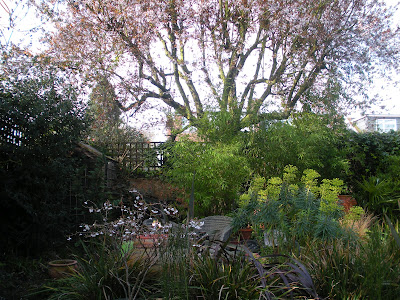 The euphorbia is shaking out its fresh lime-green flowers in competition with the cherry blossom. There's sunshine. There's birdsong. And there's ... the sound of lawnmowers and leaf-blowers and pressure washers. Time to go back indoors.
Posted by Victoria Summerley at 9:09 AM

Singing from the same hymn sheet 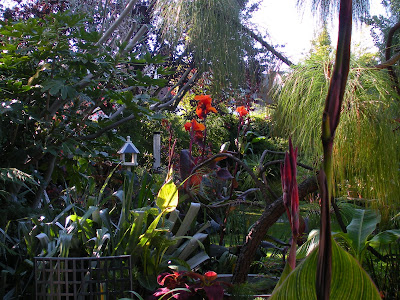 As many of you will know, I've spent much of this week singing in various performances and rehearsals. I enjoy singing in a choir - I find it very therapeutic. I think this is because it engages your whole brain.
You have to count, you have to think about pitch, you have to think about being expressive, you have to read the words and the music, you have to think about when to breathe - so there is absolutely no space left in which to stress out about whether you need to go to the supermarket, or whether you sent that email.
While I was musing about this on my way to work this morning, it also struck me that many of my fellow garden bloggers sing - or if they don't sing, they share a love of music. Was there a link, I wondered, between gardening and music? Or was it just that a lot of my garden blogging friends (those of a similar age to me) come from a generation when schools taught music properly, and communal singing (hymns at assembly and so on) was a daily occurrence?
Probably just coincidence, I decided. Then I thought about it a bit more. Hardly any of my colleagues - most of whom are at least 10 years younger than me - take part in any musical activity. I can think of only one who sings in a choir.
Yet among the bloggers I can think of quite a few - Sue Beesley, Alex Johnson, VP, for example. Nigel Colborn is a huge classical music fan.
For me, gardening is like music. I even use the same language to describe it - I like to think of planting schemes as having rhythm, form and texture. Take a look at Anne Wareham's garden at Veddw - to me, those hedges really rock. Or this landform by Charles Jencks. Or anything by Fernando Caruncho. (NB: this piece of film starts with a noisy advert.)
They remind me of a piece of Bach; it's the same marriage of order and beauty. Is it precisely that which appeals to my fellow gardeners and music-makers? Oddly enough, if you go to Fernando Caruncho's website, the first thing that greets you is a piece of Baroque piano music.
Being a lazy gardener with no design training, I often take refuge in the leitmotif approach, where the same combination of plants is repeated.
Plants are like an orchestra - there are the sonorous bass notes of deep green glossy evergreens, and the brilliant trumpet blasts of plants such as cannas and lilies. And a garden can physically make a noise, of course - the rustle of leaves, the creak of tree trunks, the humming, buzzing, tuneful chorus of insects and birds.
Gardening also reminds me of conducting - that challenge of getting everyone to come in at the right time, and at the right speed, is just like getting things to flower or fruit when you want them too. (And very often there's a lot of back-breaking work, which results in an all-too brief performance.)
What do you think? Are you a singer and a sower? Do you orchestrate your garden?
Posted by Victoria Summerley at 12:19 PM

One thing, and another, and some pretty pictures

I was going to post about our trip to the Everglades which for me was one of the highlights of our trip to Florida, but I think I might wait until I've got the energy to do it justice.
I've spent most of the past few days singing in various rehearsals and concerts, with - as a sort of grand finale - a guest appearance at the school careers evening tonight, talking to 16-year-olds about journalism as a career. So I am in desperate need of a lie-down and a cup of tea. (No change there, then.)
However, my friend Heike came round on Monday to photograph Mario and Luigi - the hilarious results of which I hope to show you soon. Heike is a photographer and she's just started marketing a range of greetings cards, which include some fabulous flower images. Since Mother's Day, and Easter and so on, is all on the horizon, I thought you might like to see them.
She's selling through eBay (if you're based in the UK) and Etsy (for American customers) and you can have a look by clicking here and here. I love the parrot tulips shown here - they light a up a cold rainy March day like a fire. Heike also specialises in cats and dogs - hence the pictures of Mario and Luigi. Today, a pair of naughty little fridge raiders, tomorrow, who knows? Feline supermodels, smirking at me from the cover of Vogue, perhaps? 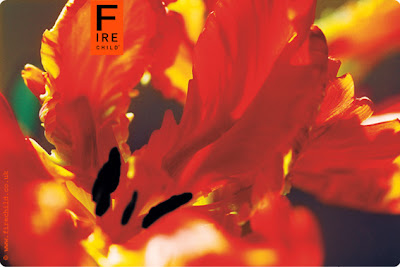 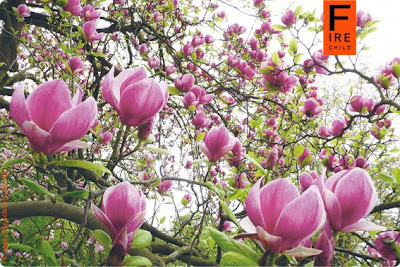 Posted by Victoria Summerley at 8:52 PM