Is this the coolest gardening club in the world?

You may have heard of the Roof Gardens in Kensington, an astonishing 1.5-acre plot 100ft above street level. Nearly 70 years old, they were designed by landscape architect Ralph Hancock for the rooftop of what used to be Derry and Tom's department store in Kensington High Street.

Hancock also designed the Rockefeller Center gardens in New York City, which each had a national theme. The Roof Gardens follow the same pattern, with three themed gardens - Spanish, Tudor and Woodland - containing more than 70 trees, a stream stocked with fish and the famous resident flamingos. Both the Roof and the Rockefeller gardens date from 1933.

The Roof Gardens are now part of Virgin Limited Edition, Sir Richard Branson's portfolio of unique retreats, but I first visited them when they were part of Biba in the 1970s. Since then, they've had a bit of a chequered career until Branson bought them in 1981. I've never been quite sure whether they are open to the public or not, although they are used for big private parties, such as media launches and showbusiness events.

So I'm happy to say that following a makeover last year, they are once more open to the public, on selected dates. If you want to visit, go here for more information.

Most fascinating of all, however, is the news that this month, the Roof Gardens have launched their own gardening club. For £25 you can have access to the gardens, and an invitation to a Sunday morning event where members will be able to listen to a speaker from the gardening world on subjects from urban bee-keeping to summer bedding followed by a demonstration from Head Gardener, David Lewis.

Those who sign up will get a branded gardening shirt, a quarterly newsletter containing seasonal expert advice and Roof Gardens news, and can enjoy up to 15% discount when dining at the venue’s award-winning Babylon Restaurant on selected weekdays.

David Lewis, the head gardener, writes a blog about his gardens, which you can read here. I was amused to see that while the rest of us were worrying about how our garden birds were surviving the worst British winter for 30 years, David was worrying about his flamingoes.

The gardens are now protected by preservation orders for the trees, and a Grade II listing but that doesn't deter David from a very practical approach to gardening. This season he's keen to not only grow more veg for the restaurant, Babylon, but also get the chefs to help with the planting.

The entrance to the Roof Gardens is in Derry Street, just across the road from my office, and they're one of the things that makes working in Kensington so exciting. I shall certainly be joining the gardening club - if only for the pleasure of taking friends there for lunch.

Posted by Victoria Summerley at 6:06 PM 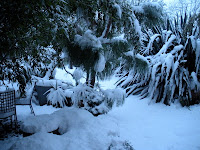 Tonight was the performance of Johann Sebastian Bach's St John Passion by my daughter's school choir. I sing in the parents' section of the choir, so this was a big moment in our household.
I used to sing in the choir when I was at school, but because of my working hours, I've never been able to commit to anything on a weekday evening, which is when most choirs rehearse. However, the parents' choir rehearses on Saturday mornings, which is the one day I am guaranteed to be off work every week.
I find singing in a choir incredibly therapeutic. It is impossible to think about anything else, especially if you're trying to get your head around a tricky bit of Bach counterpoint and your tongue around a mouthful of German consonants.
The St John Passion isn't as well-known as the St Matthew Passion, but it's still a very moving account of the death of Christ. It's quite dramatic in structure, with the Evangelist narrating the story, while the choir either acts the part of the angry crowd or gives voice to a prayer. Right at the end is my favourite chorus, Ruht wohl ("Sleep well"). I've linked to a version here in case anyone wants to have a listen. It's not us singing unfortunately, but it's a pretty similar rendition in terms of size of orchestra etc.
Now it's over, I won't know what to do with my Saturday mornings. Oh, yes - I know. The garden! I'd forgotten all about it...
Posted by Victoria Summerley at 11:13 PM

I was having an email conversation with Kate, the Manic Gardener, the other day about compost, when I mentioned the phrase "bog standard". I then had to explain to Kate what bog standard meant.
Poor Kate, she gets a bit fed up with all this unintelligible British slang. (If you haven't done so already, please do visit her blog for a very amusing account of the "sock wars", a transatlantic conflict ignited inadvertently by James A-S who happened to mention something in his garden that was "flowering its socks off".)
For anyone else who is unfamiliar with the phrase, bog-standard means ordinary, in the sense of being a bit uninspired or lacking in flair. It also pretty much describes my lawn at this time of the year, when it becomes a sodden mess.
I know it's unfashionable, but I quite like lawns. I like having an expanse of plain green on which to rest the eye. I like the fact that birds like it. (What would happen to blackbirds and robins if we all paved over our lawns?) At this time of year, however, my thoughts turn longingly to gravel or paving.
I don't water my lawn, neither do I use weedkiller or fertiliser. I rely on the moss to green it up. I weed large-leaved weeds such as plantains and dandelions by hand - a very satisfying job, especially if it has been a stressful week at work. Indeed, I was once talking to a very grand theatrical agent at the Evening Standard film awards and he told me he pretended the weeds in his lawn were his most tiresome clients. "Take that, Ms Oscar-winning name," and "Gotcha, Mr Oscar-winning name," he would cry as he prized out some reluctant tap-root. I won't tell you who the actors really were - but they are very, very famous.
However, I do use a top dressing in autumn, which is a back-breaking, blister-making process, and I spike the lawn too (also a back-breaking, blister-making process). When a trip to fill up the birdfeeders means that every step is a wince-making squelch, I wonder whether it's all worth it.
Posted by Victoria Summerley at 4:09 PM

The Yellow Book and other signs of spring

I felt a little bit guilty when I went to the press launch of this year's Yellow Book. We were at the reception, held at the Royal Festival Hall in London, to hear how the number of gardens open for charity under the National Gardens Scheme had grown to 3,700 throughout England and Wales.
We drooled over the wonderful pictures of billowing borders and serene, lily-covered lakes, and laughed at new president Joe Swift's jokes. (He is such a huge improvement on Zac Goldsmith.)
And then I went downstairs with everyone else for a glass of wine and some canapes and talked about everything and anything except the Yellow Book. Ahem.
I don't feel too guilty because I went home and filed a story for today's paper (you can read it here). But at the time I was just too busy hearing how Emmat's pregnancy was going (very well, thank you) and meeting the Constant Gardener and talking to James A-S about plans for Malvern. Oh, and saying hello to Matthew Appleby and Graham Rice. Et cetera, et cetera, et cetera.
For me the publication of the Yellow Book is a bit of a moment, though. Seeing the details of my garden in print is a sharp reminder that I am actually opening to the public in 199 days' time and that the days of lying around blaming my inactivity on snow and frost will soon be over.
My motto this year is to Keep On Top Of Things. This includes thinking ahead and making lists instead of succumbing to impulse in the nursery or garden centre.
It means ringing Moonlight Design, the garden lighting specialists, the minute anything goes wrong with the garden electrics instead of taking months to get around to it. Darren, the electrician, is fixing things as I write this.
It also means planning my time properly, instead of pottering around doing nothing in particular. Well, we can always hope...
Posted by Victoria Summerley at 1:30 PM