In the night garden

I’d never really thought about the garden at night until I moved to my present address eight years ago. It’s rarely warm enough to sit out in the evening in the UK - although, for many of us who work, the only time we can enjoy our gardens is in the evening.
However, on arrival at the Backyard, we found that most of our neighbours had outdoor lighting. Indeed, the previous owners of our house had installed it too and it was the first time I’d really thought about how a garden looked at night, as opposed to thinking of it as place to sit and eat or have a glass of wine.

When I say my neighbours have outdoor lighting, I don’t mean security lighting (though some have that too), but spotlights and uplighters that are positioned to highlight particular plants and trees.

It means that at dusk, the landscape becomes a new vista, with pools of green foliage and pale bark shining against a background of deep green.

However, you don’t have to have a sophisticated (and expensive, and energy-consuming) lighting system to transform your garden, as a new book by Lia Leendertz explains. Entitled Twilight Garden, it's a guide to planning, planting and lighting your garden for maximum evening impact and enjoyment. I think it's the only book on the subject I've ever seen, and it's a good balance of gorgeous pictures and down-to-earth advice.

Two of the things I liked most about the book were the ideas for parties - fireworks, star gazing, barbecues - and the general assumption that children will be included in activities. If there is one thing that is guaranteed to get kids interested in gardens, it is things like candles, fairy lights and barbecues, and the idea that what is a very familiar space during the day can take on a magical new persona as dusk falls. My son and I still go on night safaris in the garden - and he's now 21!

The plant listings include not only plants that look good at night - predominantly those with white flowers - but also those that smell good. Lonicera japonica 'Halliana' has gone to the top of my wish list, as has Zaluzianskya ovata. And I must keep a look-out for Epiphyllum oxypetalum, or Queen of the Night, which, says Lia, inspires sundowner parties when it comes into flower once a year. Her recipe for a sundowner party: One Epiphyllum oxypetalum plant, a gin and tonic, Singapore Sling (gin, lime juice, cherry brandy and Benedictine), or Cuba Libre (light rum, cola and a wedge of lime). Sounds like my kind of celebration.

Lia is not such a fan of garden lighting as me. She feels that gardens can be overlit, and that candles and fairy lights can create a magical effect without the need for armoured cabling and electricians.

I think she's absolutely right in pointing out that electrics out of doors need to be installed by professionals, for safety reasons if nothing else. You have to know there is a trip system in case you accidentally shear through it, and it must be secure from the predations of squirrels, rabbits, rats and mice, not to mention rain.

I would add that if you get a specialist garden lighting company in, they will come up with more imaginative, subtle ideas than your average electrician. However, such schemes are not cheap and they do use energy.

A light in your garden will cost as much to run as a light in your house. (Forget about those solar-powered things - I've never found one that gives out anything more than a sulky glower). So although I love looking out at my garden lit up, particularly on a winter evening when it's too cold and wet to appreciate it any other way (I should point out that I don't have curtains), there is a little niggle at the back of my mind that tells me I'm being a bit naughty in terms of power consumption.

And as Lia points out, one of the beauties of night gardening is that no one can really see how posh your candle holder is.

Posted by Victoria Summerley at 9:48 AM 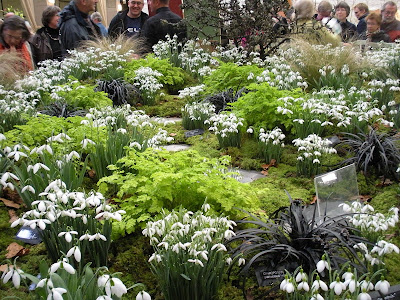 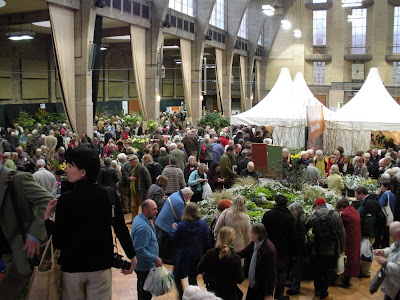 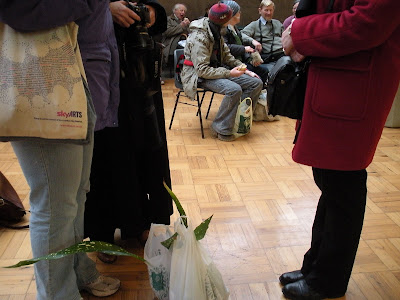 Sometimes, spring takes you by surprise 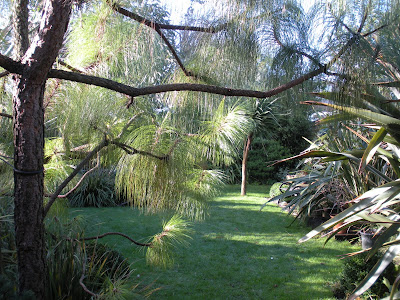 A sunny day today. (I'll just repeat that: it was A SUNNY DAY TODAY.) Still can't quite believe it. I'd almost forgotten what it was like to wake up and see the sun shining.
I've been fairly relaxed about the garden until now. It is still the middle of February, after all, and officially it's still winter. Apart from the odd bit of pruning, there's not much to do. (I'm averting my eyes from the pots of frosted mush that used to be my echeverias and eucomis.)
While I was sitting inside feeling complacent, however, Nature has been at work. 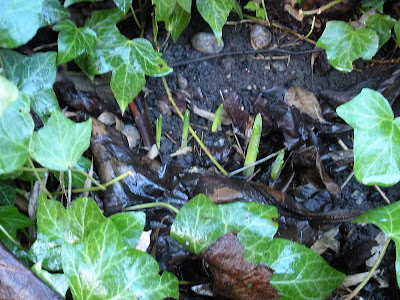 You expect to see daffodils poking their noses up through the earth at this time of year... 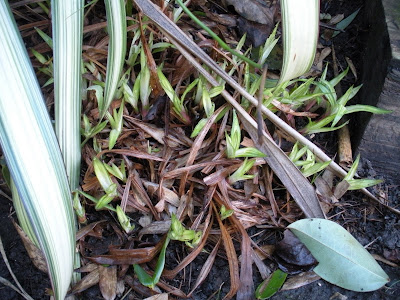 But I was quite surprised to see that Carex siderosticha 'Banana Boat' was getting into the swing of spring. I don't know why: like most sedges, it's as tough as old boots, despite its exotic appearance. 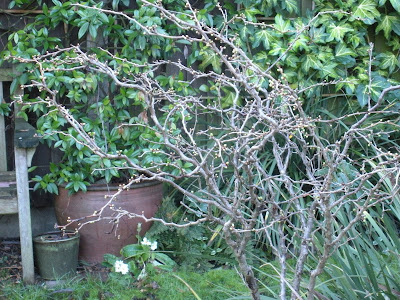 No surprise to see buds on Prunus incisa 'Kojo-no-mai' - it's usually in flower by the middle of March. 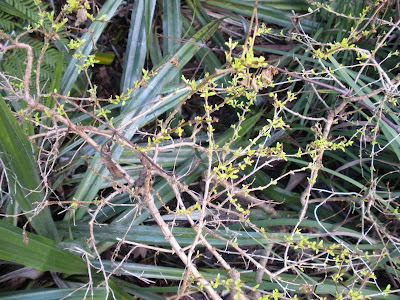 But I was quite surprised to see brilliant new leaves on Fuchsia magellanica var molinae 'Sharpitor Aurea'. Again, it looks so fragile - yet in my experience, it's usuallly the first hardy fuchsia to bounce back after the winter. I have 'Hawkshead' in the front garden, and that still looks as if it will never flower again. (It will, though.) 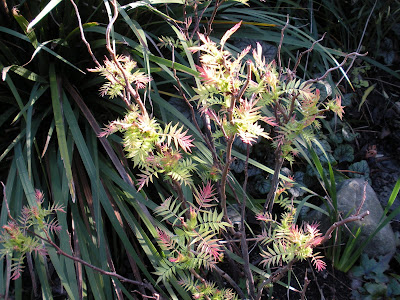 The new leaves of Sorbaria sorbifolia 'Sem' look as if they have turned pink after too much sunbathing. They darken down to green as they mature. 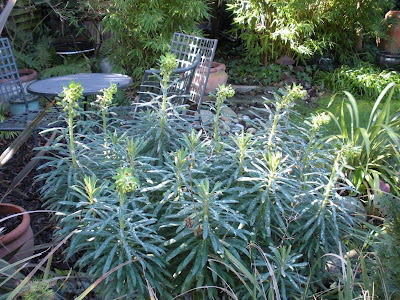 This euphorbia was a seedling that I found somewhere else in the garden. I thought when I planted it that it was Euphorbia mellifera, but I'm rather glad it's not, because E. mellifera is not quite as hardy and gets absolutely huge. This is Euphorbia characias subsp wulfenii, which looks spectacular in early spring. It's like a promise of things to come. I do hope that includes some more sunshine.
Posted by Victoria Summerley at 7:51 PM

Plants that are a pain in the ... arm 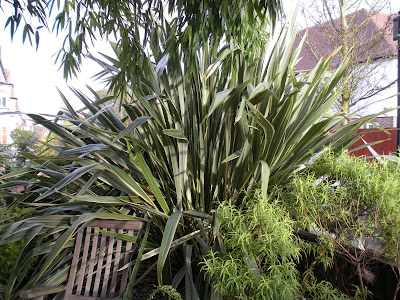 I am ashamed of myself. I have a large phormium in my front garden, of which I'm very fond. It was a present from my sister when I moved in, at which time my front garden resembled the Gobi desert with a big bamboo in the middle.
The trouble with phormiums is that they flop. The leaves are easily bent - particularly under the weight of snow - and once bent, they will never stand upright again. This isn't so much of a problem when they are actually in the garden, but if they flop over on the roadside, they present a bit of a hazard to passers-by. 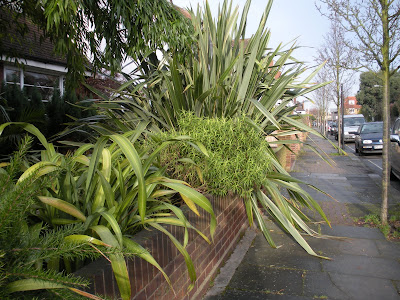 Indeed, if you are a very small passer-by, possibly in a buggy, you run the risk of having your eye poked out. And even for big passers-by, it isn't very pleasant to have to push a huge phormium leaf (which at this time of the year is invariably wet) out of your way. 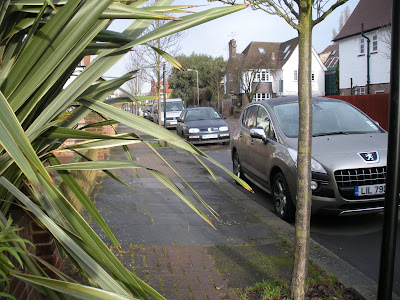 I am aware of this problem, but (ahem) don't always do something about it. So I felt truly penitent the other day when I noticed a man outside the house taking pictures of my phormium. At first, I thought he was admiring it, but when I went outside to ask him what he was doing, he told me he was from the local council, who were about to send me a letter of complaint about it. I told him I would tidy it up pdq.
So why, if I was aware of it, had I not taken action before? Well, phormium leaves are tough and take quite a bit of cutting. You need a strong, sharp pair of secateurs or scissors. It puts quite a strain on your hand and your arm, and for the past two weeks, I've had trouble with a rotator cuff injury (sore shoulder).
I won't bore you with the details, but at one point, the referred pain was so bad I ended up going to casualty at 2am. (They gave me a huge handful of painkillers - the sort of dose I wouldn't dare take at home - and eventually, the pain subsided enough for me to go to the chiropractor.)
The prospect of hacking back a phormium was not, as you can imagine, an attractive one. So why didn't I get someone else in to do it? Well, because I don't trust someone else to do a decent job, I suppose. I like to cut the leaves as low down as I can, otherwise the "stumps" can give you a nasty jab the next time you come to do the job.
Anyway, I managed to tidy it up, and to resist the temptation to carry on cutting things back, which would have made my arm and shoulder flare up again. But I think I shall add phormiums to the lengthening list of plants that I will be wary of growing again. 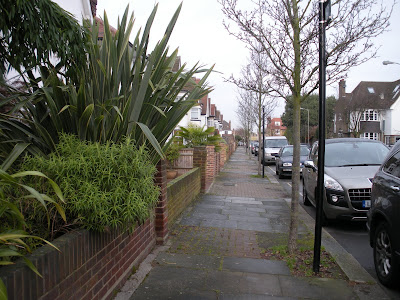 Posted by Victoria Summerley at 10:21 AM