There's tomorrow (Friday) and then Saturday, and then my open day.
I've manage to catch up with most of the chores, and filled most of the gaps, and managed to hide or disguise various bits of mess.
These include potting up my coleus, which have been languishing for months in tiny plastic pots. I could almost hear them saying: "About bloody time too!"
I've also tidied up the "glory hole" bit right at the end of the garden, where I'd piled everything that had gone over or been chewed (such as lilies and hostas), and that I didn't have any other space for (wheelbarrow, spare garden chairs). Well, I say tidied up, but an important part of the project was positioning other pots of plants so that you couldn't see it...
I still have to plant: one heuchera, seven Carex oshimensis 'Evergold' (don't worry, six are going in windowboxes).
I still have to move: three "winter" conifers in pots. It's a very nice having things in pots that you can move into prominent positions at particular times of the year. The only problem is what you do with the pots at the other times of the year.
I still have to get rid of: the bramble that always grows up through the holly tree. (You can see why I don't rush to do that job.) Plus the garden hose, and the ladder, which are lying in wait for an unwary pedestrian on the side pathway.
I should, but know I won't: sort out the big containers under the window at the front of the house. My excuse is that Julia is going to come and take away my cycad, which is in the middle. It was a rescue plant from someone in my gardening group who didn't have room for it.
Apart from that, I have to cross my fingers, light a candle and pray for a sunny Sunday.
Oh, and make some cakes. 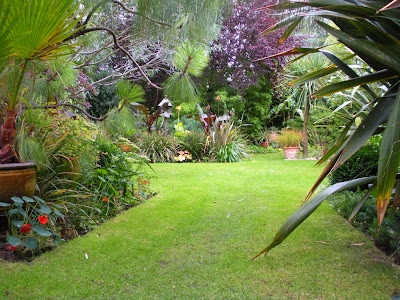 An uncharacteristically tidy view of the garden. 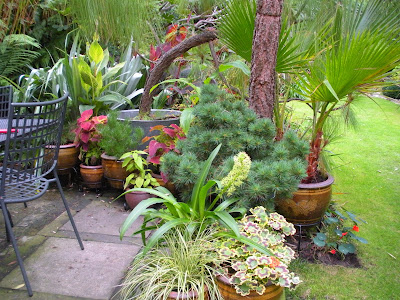 Coleus (or solenestemon, if you must) around the table area. The one below has got a bit leggy, because it looked rather good indoors, so didn't get chucked out in the garden with the rest. 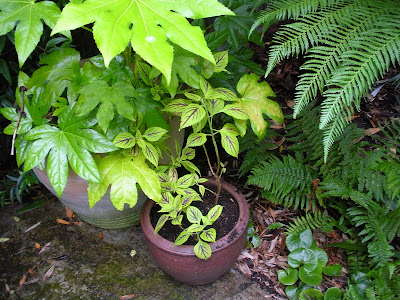 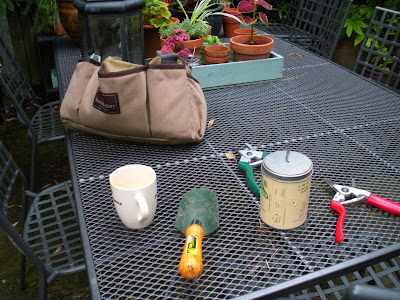 Vital tools. Trowel, string, two pairs of secateurs (for when I put one down and can't remember what I did with it), and a cup of tea.
Posted by Victoria Summerley at 10:02 PM