The garden opening, the guests and the obligatory EEEEK! moments 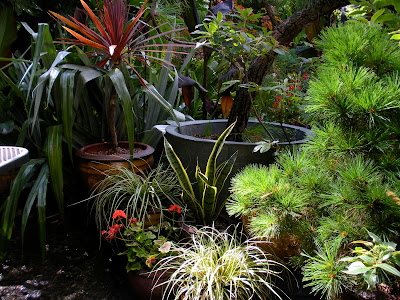 Now this is great. I'm still exhausted, more than 24 hours after opening my garden, but I find that talented friends have done all the hard work for me. So if you want to see what the garden looked like, you can see it through the eyes of Zoë and Caroline.
It's always fascinating to find out how other people see my garden, and I'm sure their photographs will make a nice change for regular readers.
We had a wonderful day yesterday. We had just over 120 visitors, who arrived in a steady stream from 2pm onwards, and we finally closed the gate at 7pm. Lots of friends came - from my gardening group, from church, from the neighbourhood, from the blogosphere - and it was hugely enjoyable.
In terms of talking to visitors, I think it was the best year ever. Everyone seemed to "get" the garden, and had interesting things to say about the plants, and their experiences with them.
We served lots of homemade cake, of course! This year, the favourites were carrot cake, and coffee and walnut (always in the top spot), but also chocolate fudge cake, which I felt a bit guilty about because I used shop-bought chocolate fudge frosting. Thank you, Betty Crocker.
Zoë was able to come for the first time this year because for once the August Bank Holiday did not coincide with her wedding anniversary. It was particularly good to see her because she was the first blogger I ever met in the flesh - as she explains in her post.
Other bloggers included Lazy Trollop and Simian Suter, plus Sue Carter who should be classified as an associate blogger, since I met her through an American blogging friend, Jean McWeeney. I love the fact that I now know someone who lives a couple of miles down the road from me in SW London through someone who lives in Louisiana.
So, the EEEEK moments. I know VP will be very disappointed if I don't mention these - she looks forward to them so much every year. So here goes.
The garden was fine. All that I had left to do by Saturday lunchtime was the cakes. I put the oven on. I got a couple of coffee sponges under way, and sat down at the computer to check the weather forecast. 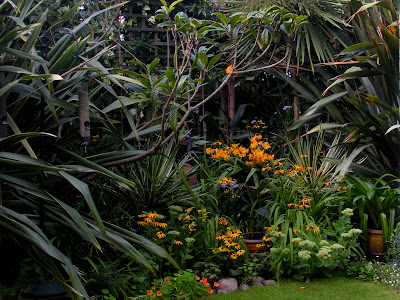 We had a massive storm here in London on Saturday afternoon (it was as if someone in the sky had turned a tap on), and I wanted to make sure the forecast for Sunday was still fine and clear.
Just as I called up the weather page, there was a flash of lightning, a crump of thunder - and the computer went off. So did the oven. And the fridge, and the freezer, and the television and the microwave. Anything, in fact, that was plugged into a socket.
I went to the fuse box, and pushed up the trip switch. It flicked back down. I tried again. It flicked back down. I called the home emergency service and asked them to send an electrician out asap. They said they'd have someone with me by 6.30pm at the latest. It was 3.30pm.
By 6.30pm, when the electrician still hadn't arrived, I was beginning to panic in a mild sort of way. I told myself that if the worst came to the worst, I'd just run out when the shops opened on Sunday morning and buy some cake. But as we all know, that's not the same as homemade...
I started switching off the sockets one by one to see if I could eliminate the fault. I'd stupidly assumed that it was something to do with the computer, since I'd been sitting at the computer when the power went off, or the oven (since that had been on).
After a few moments of slightly clearer thinking, however, I worked out that the fault was probably on the garden circuit, where I had an Armadillo (one of those plastic extension boxes). I switched off the garden circuit and - hey presto! - the power came back on. (And the Armadillo, I discovered, was full of water...) I finally finished baking at 4am.
The next morning, I managed to climb out of bed and put the finishing touches to the garden - arranging tables and chairs, mowing the lawn - while my mother and my daughter swept the terrace and tidied the living room. By 1pm we were ready to open, and my daughter, who was serving tea and cake, set out the paper plates, the paper napkins, the plastic cutlery ... and we had no cups.
I rushed to the supermarket and came back laden with polyfoam cups, just in time to find the first guests waiting for the gate to open. They looked summery and relaxed. I looked like nothing on earth, with unwashed hair that had been drenched in the downpours of the day before. Oh well, I thought. They've come to see the plants, not me. 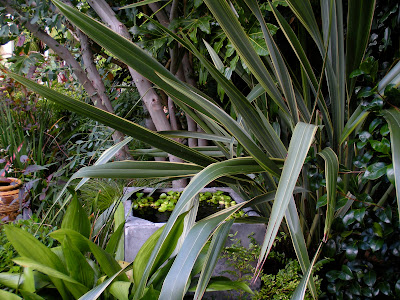 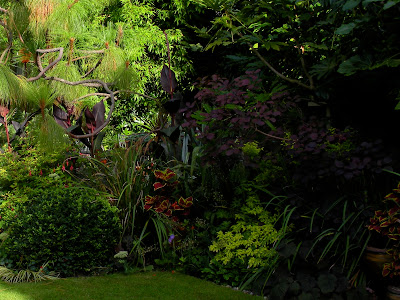 Posted by Victoria Summerley at 12:34 AM

I've always been a big fan of The Camouflage Company. My local garden centre sells their collapsible boxes, which are ideal for holding shopping, or plants, or using as storage. They also make a range of bags, and they supply items that protect garden furniture, such as benches and barbecues.
Even if your garden furniture is weatherproof, as mine is, it's useful to have something to put over it in the winter to protect it from rain splashes and bird poo.
The best thing about their garden range, however, is the choice of designs. As the name suggests, their products are designed to camouflage items, so instead of the usual utilitarian dark green, the bench covers and so on come in a long grass print, a rose print, and a daisy print.
I've always wanted one for my rotary dryer - not so much to protect it while it's in the garden but more to keep the dust and spiders off when it's stored in the shed or garage. There's just one problem. Given a choice, I can never make a decision.
I said jokingly to Louise Unger, who co-founded the company, that if she sent me all the covers, I would photograph them, put them on my blog and get you guys to decide which one I should buy. And she agreed! So here we go: cast your vote. (Click on the pictures if you want a bigger version.) 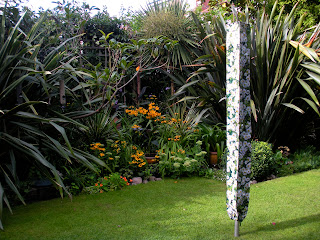 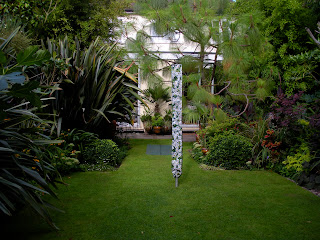 I love this daisy design - it's really fun. There's something rather surreal about a column of daisies sitting in the middle of the garden, and just photographing it made me smile. 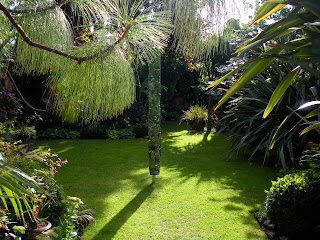 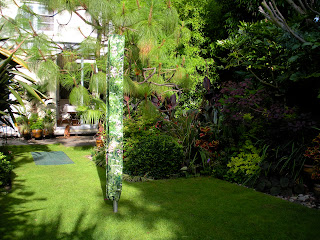 The long grass design looks like a wildflower meadow, with grasses, red campion, cow parsley and forgetmenots. I think this is the best design if you want the camouflage effect - no one could accuse my garden of looking like a wild flower meadow, yet it blends in amazingly well. 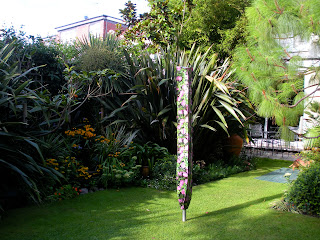 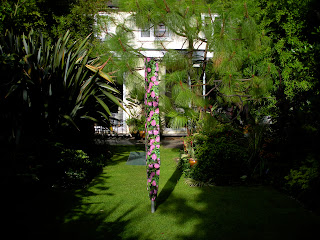 The rose design worked the least well in my garden, but in a more traditional English garden it would look great. And who doesn't like pink roses?
PS: The Camouflage Company often run "win a bag" promotions on their Facebook page. Go here to have a look.
PPS: I know I should be posting about my garden opening and how it went, but this is my day off, and I felt like having a bit of fun.

Posted by Victoria Summerley at 5:31 PM

You know it's Garden Open day when ... 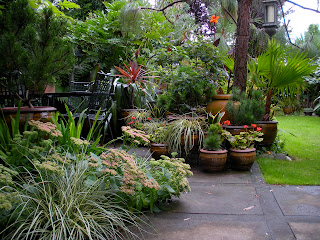 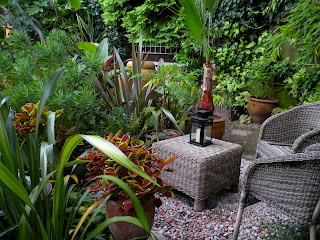 ... and that bit where you've been meaning to put down some pebbles for, ooh, years now finally has some pebbles 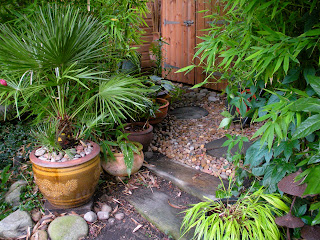 ... and even the shed area looks neat (ha! you can't see the tottering pile of empty pots behind the bamboo!) 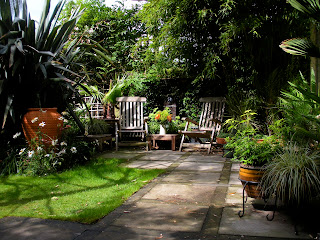 ... and there is no rubbish, or bags of compost, or unplanted purchases, or rakes, or brooms, or other bits and pieces lying around on the patio 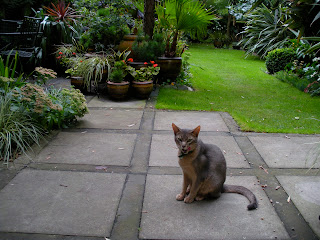 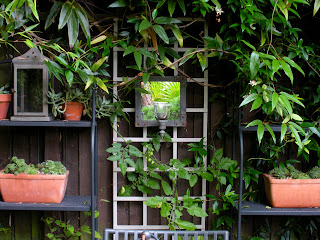 ... and even the self-sown tomato plant has been transformed into a thing of elegance (though I do say so myself) 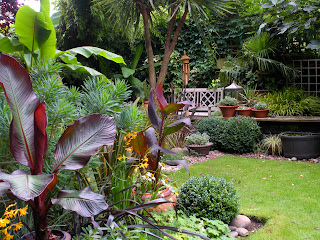 ... and there are burgeoning banana plants, and cannas about to come into flower 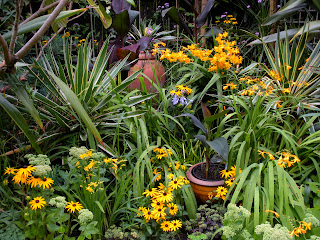 ... and the black-eyed susans are waving hello. They hope to say hello to some of you too.

Posted by Victoria Summerley at 1:42 AM