And now a baby for Emma! 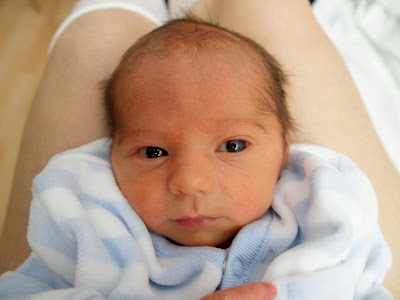 2010 is turning into quite a year. I have another birth to announce (I'm beginning to feel a bit like Stork Central), which is that of Emmat's son, who arrived this week. Here he is - isn't he sweet?
Posted by Victoria Summerley at 5:06 PM

A baby for Lainie

Sorry, this isn't about gardening, but I suppose it's sort of about growing your own! I just wanted to celebrate the fact that our former nanny, Lainie, has had a little boy.
He's called Ted, he weighs 8lbs 6oz and he arrived at 5.45am today.
Lainie was with us for about 12 years, from when my daughter was about six months old, so she has a very dear place in our hearts. But what makes this baby really special is that Lainie and her husband have been trying for a family for years.
They've been through that long process of heartache and disappointment; of IVF and fertility treatment and endless tests and invasive procedures. They've hoped so hard and now that hope has been rewarded. It is particularly poignant given that Lainie - as one would expect - is absolutely brilliant with children. If anyone ever deserved to have her own baby, she does.
So here's to Ted, and may he be the most gorgeous little bear in the whole world.
Posted by Victoria Summerley at 12:11 AM

The end of winter 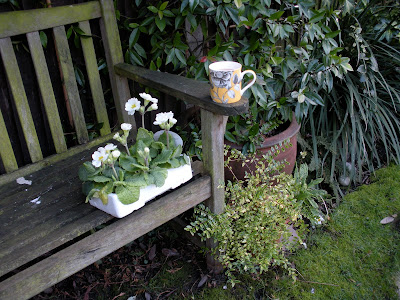 I was going to call this post "Waiting for spring", but I thought it was a rather downbeat title. I'm sick of waiting for spring. Sick, sick, sick. Even on sunny days, it's still cold here in London, with a north-east wind that cuts right through you. And it's still frosty at night.
According to the Meteorological Office, spring begins on 1 March, not 22 March. It shows you how much they know. No wonder they've given up long-range seasonal forecasts, having got them spectacularly wrong for three years running.
There is still no sign of the usual harbingers of spring. The small prunus that I have in pots, Prunus incisa 'Kojo-no-mai', has optimistic-looking buds, but no flowers. It is usually in flower by the end of the first week in March. The ornamental cherry at the end of the garden, which is sometimes in flower as early as late February, looks determinedly bare, as if the idea of unfurling even one petal is too much to contemplate.
I sympathise. The idea of unfurling one layer of clothing makes me shiver. When I bumped into a couple of neighbours this morning, we were all agreed it was far too cold to get out and garden.
Yet as the day wore on and the sunshine grew stronger, I found myself hunting out fleece and warm socks and putting on gardening shoes. Fortified with a cup of tea, I set forth, much to my surprise, secateurs in hand. The main job was to cut down last year's miscanthus growth and tidy up the phormium at the same time.
If you don't cut tall grasses down early enough, it's very difficult to avoid cutting off the new growth. You could leave the previous year's stems, of course, but then you can't see the new growth for the old thatch. On the other hand, the old stems look lovely in the winter sunshine. So this time of year is just about right for a major chop.
I find that having gardening gear I really like makes a huge difference. I love my Gold Leaf gardening gloves. I think mine are Winter Touch, which are really cosy and fit well. I also love my gardening bag, below. It keeps everything safe in one place - secateurs, trowel, string etc - so you can grab it and go without having to hunt down each individual item. Left to myself, I would probably have chosen something much more sober, but this was a present from someone who had the sense to choose something that would make me smile every time I looked at it.
I love my ergonomic Felco secateurs, that allow me to spend the afternoon cutting stuff down without giving myself Repetitive Strain Injury. 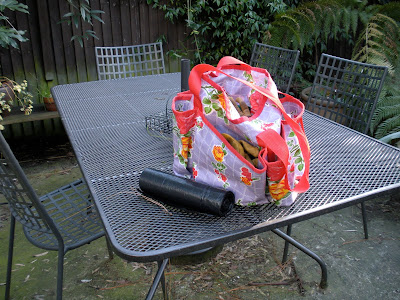 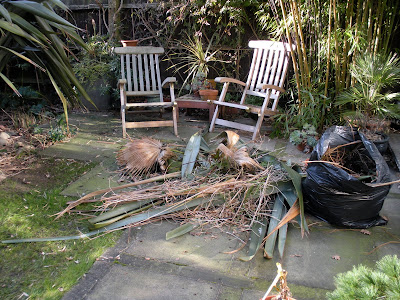 Posted by Victoria Summerley at 5:22 PM