Dusk and the evil hour

"Putting off the evil hour" was one of my grandmother's favourite expressions. It originates in the Bible, of course (Ye that put far away the evil day, and cause the seat of violence to come near - Amos 6:3), like so many of the expressions we still use today.
For my grandmother, however, the "evil hour" usually referred to some distasteful task or event, such as the ironing (in her case) or piano practice (in mine).
It basically means to procrastinate, or to use a more modern idiom, to fill your time with displacement activities rather than getting on with the job at hand.
I know this will resonate with many of you, especially patientgardener who remarked on Twitter the other day that she has been known to clean the whole house before writing a commissioned blog post. "Commissioned" is the key word, because while I can sit down quite happily and witter away on my own blog, the minute I have to write a piece for someone else, the whole process becomes much more fraught.
I've been trying all day - all week - to sit down and write a piece for the Independent Magazine about my garden. What could be easier? And yet I find it so difficult to focus on it.
I meant to sit down and start at 6pm, but decided the lawn had to be cut instead. Then a bit of weeding and deadheading just had to be done.
Part of the "putting off the evil hour" involved taking pictures of the garden at dusk, inspired by photographer David Perry's blog. David gave us a photography seminar while I was in Seattle (I might get around to posting about it one of these days).
The results were a bit mixed, unlike his wonderful examples, but I did take a photograph of my fig tree, which for the first time has what look like viable figs. This is because I actually got round to pruning it this spring, and pulled off all the unripened figs last September as you're supposed to do.
So, there's a lesson here. Don't put things off, and you'll be rewarded. I'm off to write my piece now! 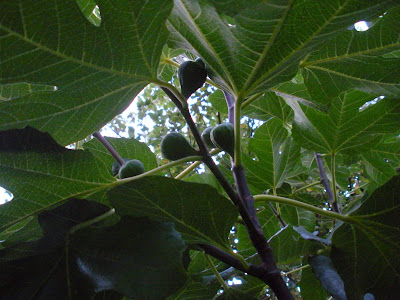 Posted by Victoria Summerley at 9:08 PM