Eek! Tweak! There's only a week!

Luckily, it has been a lovely day here in London, because despite my promise to myself to make an early start with tidying up the garden (well, to be scrupulously honest, to make an early start yesterday), I didn't actually get going until about 3pm.
Today's chores involved a lot of maintenance - staking, weeding, deadheading, taking off brown leaves, that sort of thing. I don't normally need to stake anything, but two of the crocosmia - 'Lucifer' and one of the yellow ones - got so enthusiastic about flowering this year that they nearly fell over.
(By the way, if someone invents a foolproof way of taking the dead leaves off a mature cordyline without a ton of dirt and muck falling down the front of your T-shirt, let me know.)
I open my garden for the National Gardens Scheme a week today. As usual, I'm alternately panicking about it - and worrying that I'm not panicking about it enough. One minute I'm ringing up Crocus and bothering them about what they've got in flower. The next, I'm sitting reading the Sunday newspaper and eating a cookie instead of Getting On With Things.
I've got the week off work, though, and there is something very nice about the prospect of pottering around the garden and the kitchen without interruption for the next few days. And Crocus have my favourite dahlias in stock, so I can use those to fill any gaps. Phew. 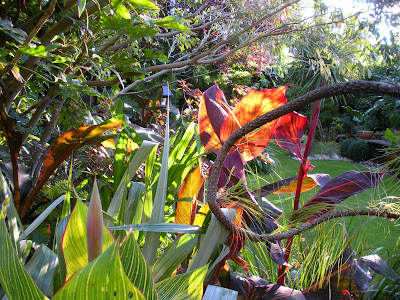 I love the canna leaves when the late summer sunshine hits them in the evening. Now what about some flowers, guys? 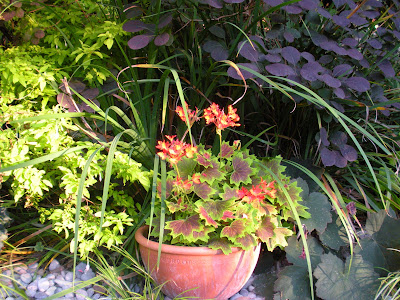 'Vancouver Centennial' pelargonium. I was wondering the other day whether this was too lurid. But in the afternoon sun, it looks good - as if you could warm your hands at it. 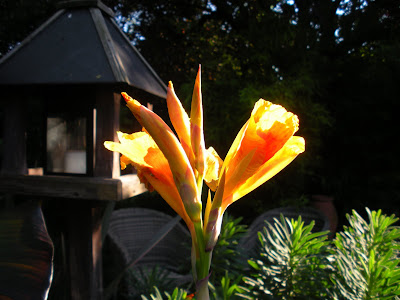 Canna 'Tropicanna Gold'. I casually assumed this was the same as 'Pretoria'. It isn't. Although the leaves look identical when it's in the nursery or garden centre, it doesn't get as big and the flower is not orange, but, erm, gold. As anyone but me would expect. 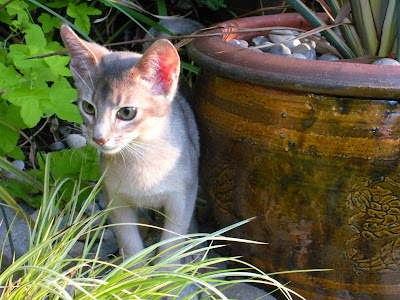 Ooh, look, a helper. Trouble is, Luigi thinks that "cutting the grass" means nibbling the ornamental varieties. He only comes out in the garden if one of us is out there too - we don't let him out on his own. He really enjoys bounding around, chasing bugs and butterflies ... and flattening plants. Sigh. He's so cute, though, it's impossible to be cross with him.
Posted by Victoria Summerley at 6:59 PM