The morrow was a bright September morn;
The earth was beautiful as if newborn;
There was nameless splendor everywhere,
That wild exhilaration in the air,
Which makes the passers in the city street
Congratulate each other as they meet.
Henry Wadsworth Longfellow

September dawned with a beautiful morning today, so much so that those of us who were on Twitter first thing were positively lyrical in our celebrations of the first day of autumn. It inspired me to get out in the garden and take some pictures.
I was also inspired by patientgardener's End of the Month View meme, which I always love to read, but don't always participate. I like her honesty about her garden, and the way she identifies the problem areas - although I have to say that every time I've seen it, it looks absolutely wonderful.
So having wandered around taking September morning sunshine pictures, I thought I'd identify a couple of problem areas in my garden. The first two involve luzula, or woodrush. Why anyone would want to grow this plant is completely beyond me. I inherited it from the previous owners and it have never looked anything other than a mess, even when in flower.
I suppose the only good thing you could say about it is that it is pretty much indestructible. (And that's possibly not a good thing to say.) It's not architectural like some grasses, and the colour isn't very interesting. It just sits there in a green, spreading lump. 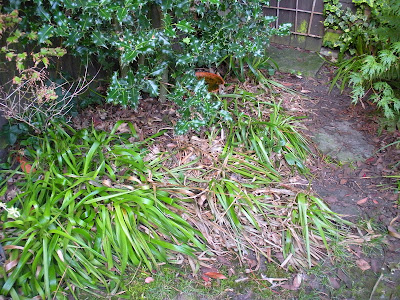 This is woodrush in its normal tatty end-of-summer state. This one looks even more tatty than normal - not quite sure why. I think I might have left a pot sitting there earlier in the year. 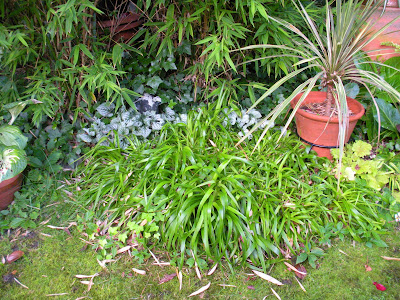 Here's another patch. I've been meaning to take this out for ages, but I think autumn/winter 2011 may be the moment. While I'm at it, I may dispense with the Brunnera 'Jack Frost' as well. Very nice plant, but not here - it's too silver. 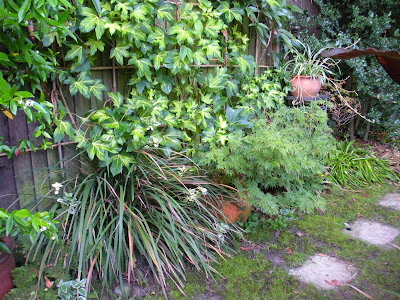 This is the border that leads up to the luzula beneath the holly tree. It's also a problem, as it only really looks fresh and interesting in spring. The feathery acer is in a pot, which makes me think I might take the advice of Graham Rice, who has just brought out a new book called Planting the Dry Shade Garden, published by Timber Press.
Graham wrote about this in The Independent Magazine a couple of weeks ago, and if you have problems with dry shade (and very few of us haven't), the book is well worth a look.
I was particularly struck by his suggestion of building a raised bed in dry shady areas, which gives you the chance to put in a reasonable depth of soil, and help plants combat problems such as rain shadow, and lack of nutrients thanks to tree roots. This border is a perfect candidate. 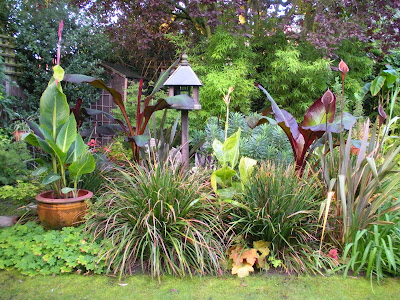 I'm also thinking of ripping apart the bit above. I like the bronze phormiums, but the libertia, while very pretty in spring, soon look past their sell-by - and these have been here for years. I've tried to get away with revamping it by placing pots among the existing plants, but I think it needs a total replant. 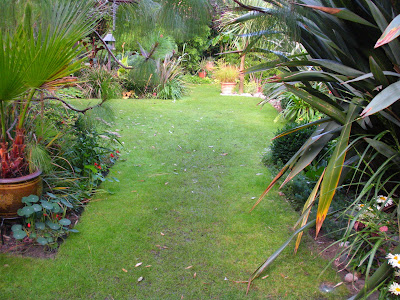 The lawn got somewhat trashed by the visitors on open day, but I know from experience that it will bounce back, given a bit of top-dressing and spiking.
So what does look good? This red banana (Ensete ventricosum 'Maurelii') was the first to be potted up this season, so it's also the biggest. It's at least 6ft. 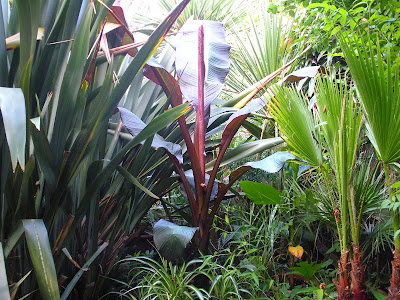 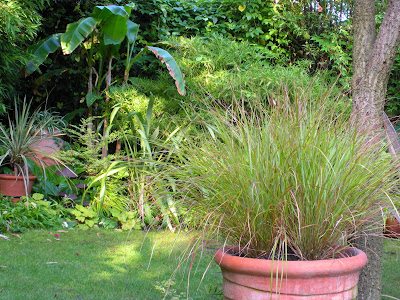 And this pheasant grass was a present from Peter Clay, who is a fellow NGS garden owner - and also happens to co-own Crocus. He very kindly tried to persuade me to have something more exotic, but I just loved this, particularly with the bronze phormium beside it. 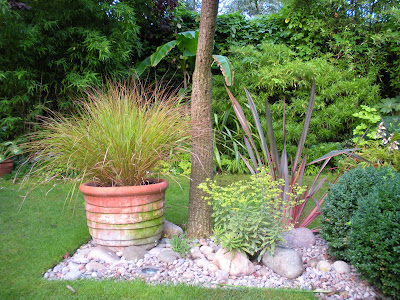 It used to be known as Stipa arundinacea, but is now called Anemanthele lessoniana. I do wish that when botanical experts were renaming things they'd spare a thought for those of us who have to tell other people what the plant is. "Stipa" is much easier to say than "Anemanthele". 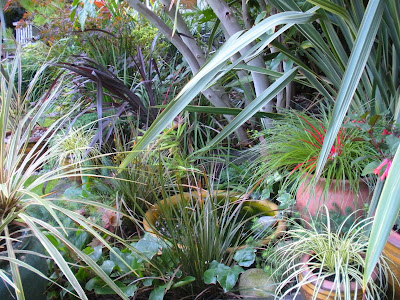 I'm very proud of the fact that my Fascicularia bicolor flowered for the first time this year. It was a huge talking point at the open day - unfortunately, because like Anemanthele, it's not the easiest name to roll off the tongue. Fascicularia look incredibly exotic (they're known in my house as the "baboon's bottom plant") but they are really, really tough. I've got two and they've been in pots in the garden for years without any protection whatsoever. They'll grow in sun or shade too. A perfect plant - if you like the saw-toothed leaf look.
Posted by Victoria Summerley at 8:24 AM