I don't usually get involved in memes - usually because I'm too busy or disorganised. However, I met Carol from May Dreams Gardens at the garden bloggers' fling in Seattle, and I'd like to mark the making of new friends by joining in her Garden Bloggers' Bloom Day meme this month. If you'd like to get involved too, follow the link. Carol, it was such a pleasure to get to know you!
You'll probably think I'm mad if I say that I don't actually like red very much. But I do like unusual foliage, and very often - especially in the case of pelargoniums - that seems to come with brilliantly coloured flowers.
I've never understood this. If I was breeding a plant for foliage colour, I would go for more insignificant flowers that don't detract from the leaves. But what do I know? 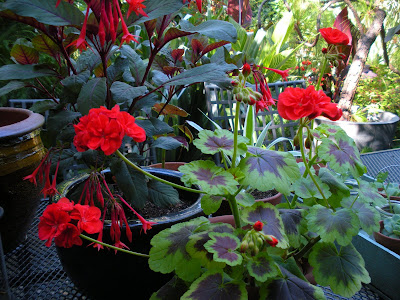 This is the tender fuchsia, 'Thalia, with its orangey-red flowers and dark leaves. It will sometimes survive a mild winter, but never seems to recover as well as a hardy variety. It's partnered here with Pelargonium 'Occold Shield', which was bred by the Reverend Stanley Stringer, and named after his parish, Occold, in Suffolk. There's a fascinating article about him by Andy Andrews here. Apparently the Rev Stringer once started to read his Sunday sermon, only to find that he'd brought his pelargonium list to church by mistake. 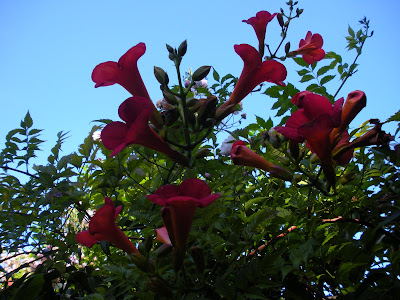 Campsis grandiflora, or Chinese Trumpet Creeper. It's an absolute thrill to see this flowering so well. It is hardy (it's on a south-facing fence), and always produces lots of leaves, but it needs a lot of sun and heat to flower. I think the hot spring helped. I prune it back every year to keep it under control. Apart from that, it's a really easy plant. 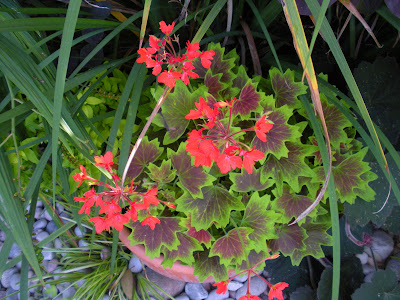 Pelargonium 'Vancouver Centennial'. Fabulous foliage, but not so sure about the flowers. I've been known to cut them off. 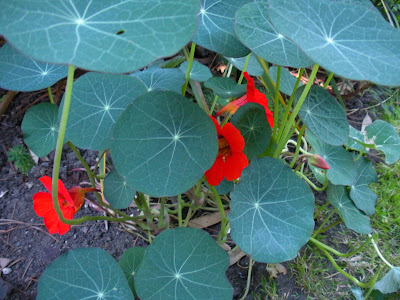 Nasturtium 'Empress of India'. For some reason, this always does well in my garden, even under the Montezuma pine, where other nasturtiums tend to falter. 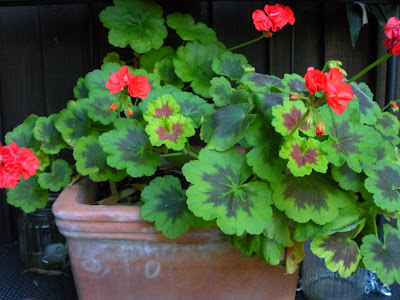 Another 'Occold Shield'. Unlike lots of pelargoniums, this will tolerate quite a bit of shade, and in fact the leaves tend to bleach if it gets too much sun. 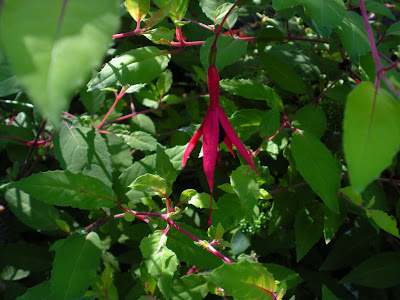 Fuchsia magellanica 'Gold Mountain'. The leaves don't look particularly gold in this light, but this is a bombproof hardy fuchsia, which bounces back each spring as if winter had never existed. By August, it has put on about three feet of growth. 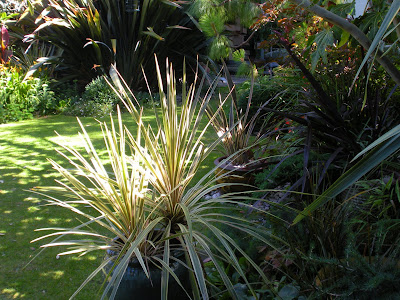 So why have all the red if I'm not sure that I like it? Well, as you can see from the picture above, you can put quite a lot of bright colour into my garden without really noticing it. It needs the occasional pop of yellow, or orange, or red as a contrast to all the green.
One of the lessons my garden has taught me is that you can't always plant something just because you love it. I often hear people say that they don't like grasses, or heucheras, or conifers. They want flowers, and more flowers. But sometimes, we need to think outside our own prejudices in order to provide contrast and texture.
If it's any consolation, once I've experimented with a plant I wouldn't normally have thought of planting, I usually become addicted to it. Happy Bloom Day!
Posted by Victoria Summerley at 10:28 AM