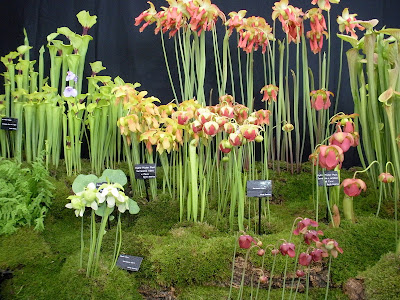 You may find this difficult to believe, but I didn't spend all my time gossiping with other bloggers at the Malvern show. No, no, not at all - I spent quite a lot of time looking at the exhibits. And quite a lot of time eating sausage sandwiches, drinking cups of tea and trying to ignore the fact that the weather was absolutely awful. It was cold, wet and deeply miserable.
I arrived at the show with VP and instantly dragged her off, against her better judgement, to the Floral Marquee. "Much better to go later," she said, resisting my arm-tugging, "when it's not so crowded." "But it's under cover," I said. "Good point," she said.
We both had severe attacks of what I'm going to call Malvernitis. Patientgardener has already posted about the phenomenon, and it goes like this. You see fabulous plant on nursery stand. You go ooh or aah (depending on personality/gender). You think it is just the thing for non-existent blank space in your garden. You look to see if said plant is for sale. You find it is not. You ask nice friendly nursery person if they have one. They say no, they have sold out. This is because (in VP's case) Carol Klein has been on Gardeners' World the night before and named whatever it is you want as her Plant of the Show. You mutter a rude word.
I also suffered an attack of Flower Show Amnesia. Emerging finally from the Floral Marquee, I said proudly to VP: "I didn't buy anything!" "Yes, you did," she spluttered, "you ordered some tulips from Bloms Bulbs!" Oh yes, so I did ...
The Floral Marquee was my favourite part of the show. There were just so many wonderful exhibits. I went back another couple of times, and I was still seeing new things on the third circuit. These are the plants or exhibits that caught my eye: 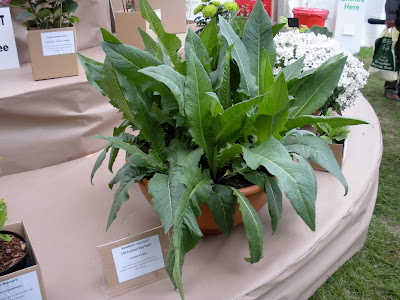 Giant Turkish rocket from Rebekah's Vegetable Seed, above, and their stand, below 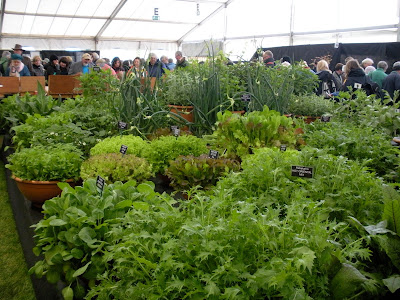 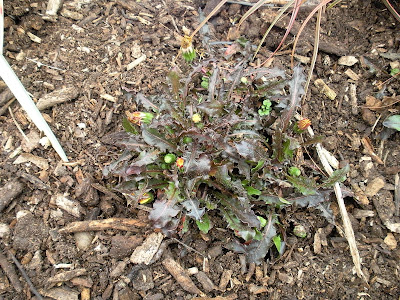 A black-leaved dandelion on the Cotswold Garden Flowers stand (Taraxacum rubrifolium, I think). I thought it would be a wonderful prank to have some in the lawn on my open day ("Goodness, what is that weed?" "That's not a weed! Surely you recognises the very rare Taraxacum rubrifolium?") I also rather coveted the rheum, below, which is 'Hadspen Crimson'. Rheums were big at the show. Very big... 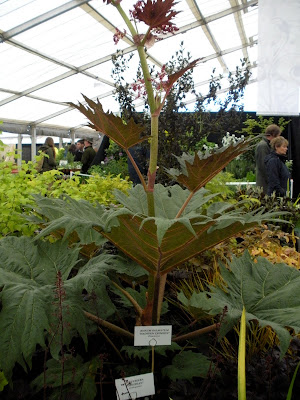 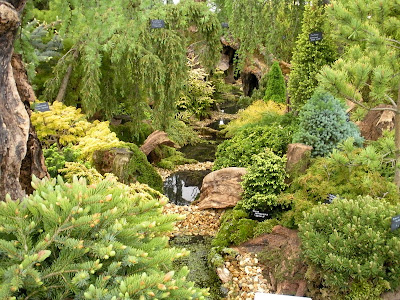 This conifer nursery, Owens Bros, had won a gold medal for their display, which I thought was absolutely exquisite. I think it would have converted even the most die-hard conifer-hater. The photograph probably makes it look bigger than it was - the stand was about the size of a large dining room table.
So what did I buy? I bought a little acer, 'Orange Dream'. I'd wanted 'Autumn Moon' but it was quite expensive (£25) so I settled for the cheaper one instead. I have an 'Orange Dream' in my garden already, so I know it's quite reliable and easy.
When I went back to collect it, Rob and his business partner Liam came with me, so I ended up not only picking up my acer, but was also persuaded into buying a dwarf larch from Owens Bros and a Tetrapanax papyrifera 'Rex' that Rob spotted on the Cotswold Garden Flowers stand.
Memo to self: must never go in Floral Marquee with Rob and Liam again.
Posted by Victoria Summerley at 5:34 AM