It's show time. Which means it's party time

Blogging wasn't supposed to be like this. When I started my blog, two years ago, I'd envisaged sitting alone in my attic, the computer keys tapping out a lonely staccato message as the light of a pitiless moon slanted in through the broken skylight.
Instead, it's been party, party, party.
A couple of weeks ago, there was the Meet@Malvern get-together at the Malvern Show.
This week, it was the Chelsea Flower Show, which means serious partying interspersed with frantic bursts of real work.
I was at the press day for Chelsea on Monday, which is always a fantastic bash, filled with celebs and camera crews and free champagne and gardening journalists to gossip to. This year was made even better by glorious sunshine. Of course, being British, we all complained it was far too hot, and stood around ostentatiously fanning ourselves.
Unfortunately, while everyone else was swigging back the Laurent-Perrier, I got a call from work asking to me to file asap for the following day's paper. You can read the results here and here. So forgive me if I just stick to brief captions. 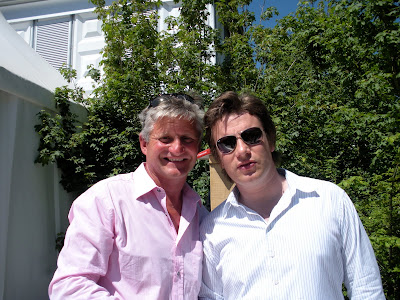 Designer Mark Gregory, who won three gold medals, with chef Jamie Oliver. Mark designed the Children's Society garden, which was conceived as a teenage space with gazebo, plunge pool and pizza oven. Jamie was cooking pizza in it and very good it was too. (I had some.) Mark won a gold for his Children's Society garden, and his company Landform also built the Tourism Malaysia garden designed by James Wong, and the Music on the Moors garden designed by Christina Williams. I don't think anyone's ever won so many medals in one go before. 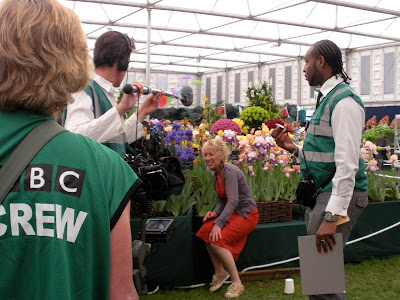 Lovely Carol Klein at work with the horrible BBC, who spend the whole of press day amusing themselves by taking up vast amounts of space around the exhibits and pushing print journalists like me out of the way. As I passed this stand, they asked me to keep back and not take photographs. Naturally, I took absolutely no notice whatsoever. 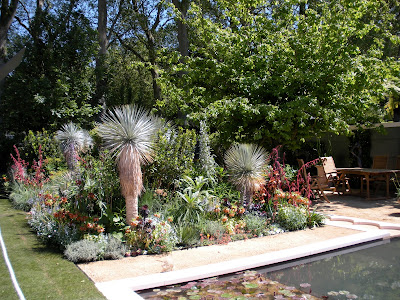 Thomas Hoblyn's garden for Foreign and Colonial Investments. I'd seen this during build-up and wondered how they were going to incorporate the Yucca rostrata into the design, as it's quite a difficult colour. I thought the finished planting worked well - I liked the combination of the rusty red with the pale blue foliage. So it really didn't need a naked dancer popping up in the middle of it as far as I was concerned ... 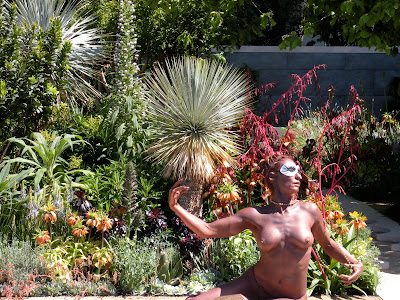 ...but of course, some people think that's the sort of thing you have to do at Chelsea to get the photographers' attention. By the time I'd left Chelsea, I never wanted to see - or hear- this garden again. All morning long, they had stunts of one kind or another, usually involving attractive young women and invariably accompanied by deafening music. 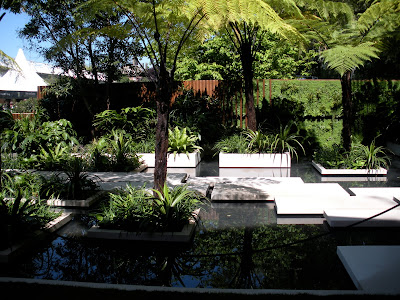 Let's look at some gold-medal winners. Above is James Wong's garden for Tourism Malaysia, using plants that are either native to the region, or cultivars derived from native species. It had a sense of serenity and simplicity, yet gave you that feeling of wanting to keep on looking at it that always seems to mark out a good garden at Chelsea. 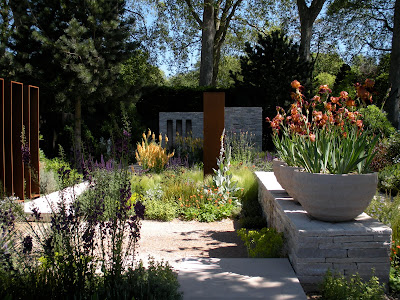 The best in show. Andy Sturgeon's design for the Daily Telegraph, and a worthy winner. I loved the way he picked up the rust of the pillars with the verbascum and irises, and the mixture of formal straight lines with billowing plants. He also seemed to have thought about where the light was going to hit the garden, as the sun seemed naturally to spotlight the focal points. 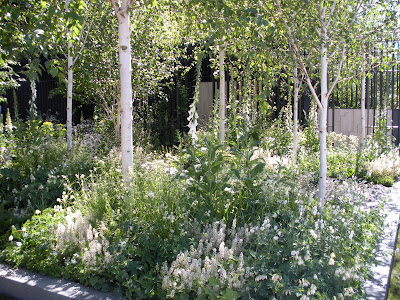 Another peaceful oasis by Robert Myers for Cancer Research. The theme of the garden was 'Enlighten' and the designer has played with light and shade, making the transition from the white birches and underplanting to a central seating area surrounded by pink and blue flowers.
I secretly wished he'd kept the white theme going all the way through. 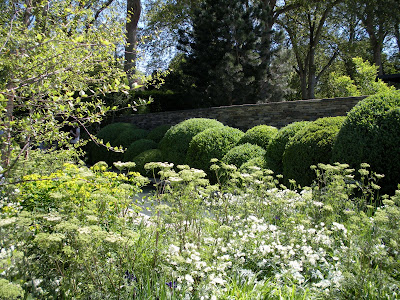 Tom Stuart-Smith for Laurent-Perrier. Most people agreed that if Best in Show hadn't gone to Andy Sturgeon, this would have nabbed the prize. My photograph doesn't do it justice. I want those box balls! 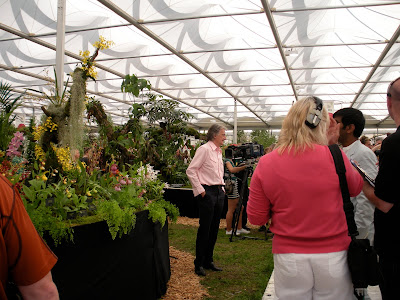 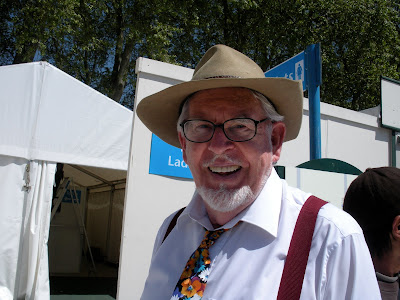 Can you see what it is yet? Yes, it's Rolf Harris, national treasure and a hero in our family thanks to his series Animal Hospital. Bless. 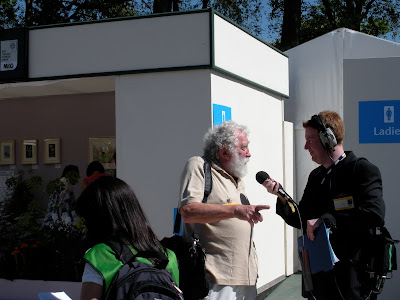 Naturalist David Bellamy in full flow for some radio station or other. 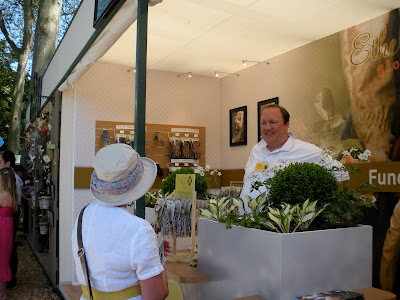 Another bloggers' convention. Gardening journalist Helen Yemm talking to The Fat Gardener, who was on the Ethel Gloves stand.
Posted by Victoria Summerley at 10:26 PM