My first sight of Gail and Frances was when I caught sight of them waving at me in the Design For Living Theatre tent. "Goodness," I thought. "I know Americans are friendly, but that's so nice that they recognised me."
I rushed over to say hello, and to ask which was Gail and which was Frances. They looked at me in a rather bemused fashion. "Who are you?" they demanded. They'd been waving at VP, who - unknown to me - had been standing right behind me watching the show.
Behind them, in the next row, two other women smiled tentatively at me. Yolanda and Ewa! VP came over to join us and thus my sorority house weekend began.
The show we had been watching was about chickens, and involved Joe Swift, Cleve West and James Alexander-Sinclair - otherwise known, according to the compere, as the loud one, the smouldering one and the posh one. They were talking to a chicken expert, which involved holding chickens and, if you were Cleve, having them poo down your leg. I never realised chickens did such big poos. I thought they laid pellets that were then neatly packed into tubs ready for sale in garden centres. 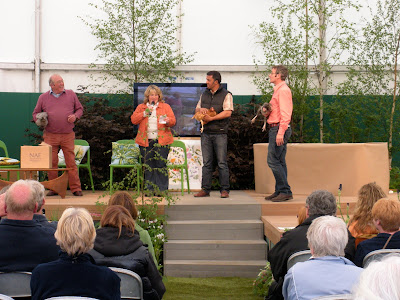 I'd arrived quite late at Malvern - around 5pm - as I'd been working late the previous night on the UK general election coverage. I only had time to have a quick peek as I passed the various exhibits but I was thrilled by what I saw. School gardens, designer gardens, a floral marquee and loads and loads of things to buy.
The show closed at 6pm, and people were hungry, tired and cold so we headed off to the Sorority House (aka the Lighthouse). Everyone was raving about how lovely it was and I wasn't disappointed. It smelt gorgeous too - a lovely woody smell - and thanks to the solid fuel stove, it was warm and cosy inside. There was plenty of room in the big kitchen to sit round the table and talk. This was just as well, because that was what we did most of the time. 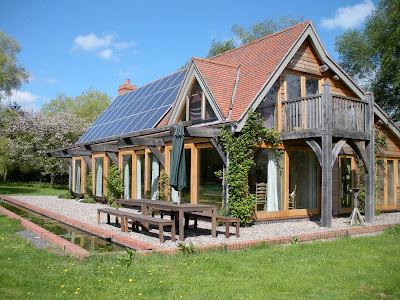 Patient Gardener was our host that evening, so we all headed over to her house with contributions of food and drink (and in my case, seedlings). You could tell it was a garden blogging party though, as most people headed straight outside rather than towards the wine bottles.
I've seen pictures of PG's garden many times on her blog, but of course it looked slightly different in real life. It looked fantastic, in fact, with wonderful colour contrasts and the most incredibly healthy-looking plants. 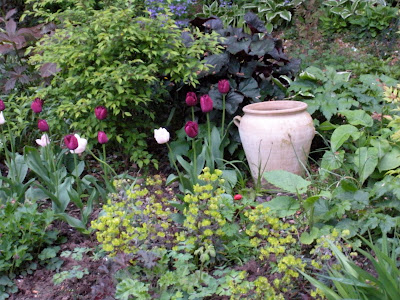 I was very envious of PG's tulips, above, and I loved the combination of apricot tulips, below, and the soft dusty blue of the rosemary 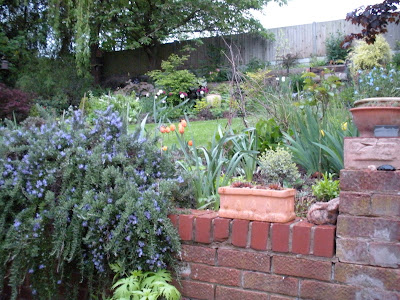 There were old friends and new faces at the party: Zoe, Anna, Karen, Karen's sister-in-law Dobby, Lia, Elizabethm, Michelle. I was dying to meet everyone but was slightly overcome by the amazingness of it all. I'd be introduced to someone and find myself standing staring at them in a rather gormless fashion because I was just so entranced by the idea of putting faces to names. So if you were there, and I didn't get time to talk to you or seemed remarkably stupid, many apologies. 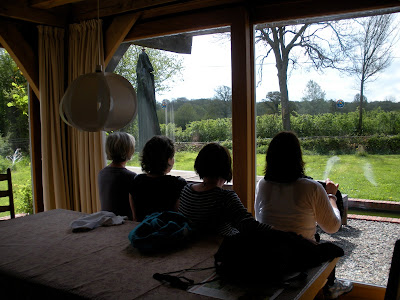 Victoria: What are you all looking at?
Yolanda: We're not looking at anything. We're sunbathing.
Victoria: Aha.
Gail: Have you never seen turtles on a log?
Posted by Victoria Summerley at 1:33 PM