This is the real secret of life - to be completely
engaged with what you are doing in the here and now.
And instead of calling it work, realize it is play.
Alan Watts, Work as Play 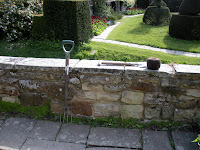 I suddenly realised today what exactly it is about being in a garden that I enjoy so much. It is that sense of living for the moment. And not just living for the moment, but - in very special gardens - a sense of stepping into another world.
I find it very difficult to switch off. I annoy myself by always thinking ahead, anticipating the next chore or task or problem, instead of sitting still and enjoying the "here and now".
This is what makes Great Dixter a very special garden for me. It's not the most manicured garden you'll ever see, or the biggest. But it is certainly one of the most magical. Every time I've visited I've had that sense of time stopping, of being aware of nothing more than the colours of the flowers, the hum of insects and the birdsong. It's the most relaxing feeling in the world.
Dixter is very much a working garden, but the sight of a member of staff busy in one of the borders, or pruning a climber seems only to heighten the sense of being in a different universe.
What matters is not the mortgage or the recession but how wonderful that golden elm looks against the clipped castellations of the yew hedge. The only urgency is to breathe in the scent of the velvety wallflowers glowing amidst the orange tulips. The only reason to move is to explore the paths that lead you on through yet more flowers - tulips, forget-me-nots, magnolia, lunaria - guarded by the solemn yews.
I can't tell you how much pleasure it gave me to show Great Dixter to Gail and Frances, two innocents from Tennessee abroad in the land of afternoon tea at "harf parst four".
St Augustine once said that "he who sings praises twice". (Actually, he didn't say it quite as concisely as that, but never mind; that's what he meant.) I think St Augustine, who himself found his faith in a garden, would have to agree that she who visits a garden with other gardeners has twice the enjoyment.
Indeed, she (or he) who visits a garden with other garden bloggers has one hundred times the pleasure, for each account, from each different perspective, and the comments they inspire, reflect off each other like mirrors to provide an endless picture of an experience.
Thank you, Gail and Frances. It was a pleasure and a privilege to share some time and some gardens with you. 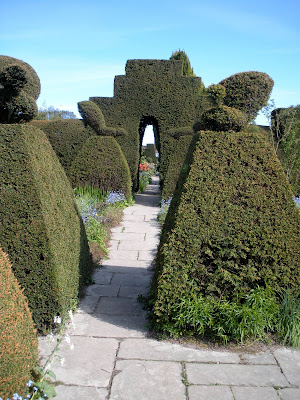 The yew hedges, which offer tantalising glimpses of gardens beyond 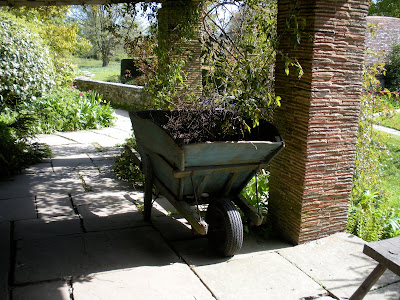 A wheelbarrow sits beneath a pergola, waiting for the next load of clippings 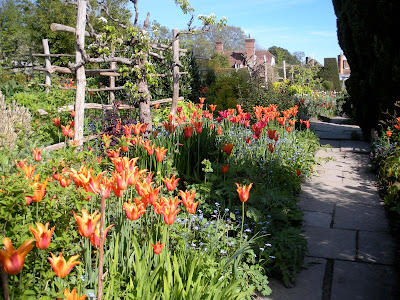 A blaze of tulips. Great Dixter doesn't go in for labels, so I have no idea what variety these are 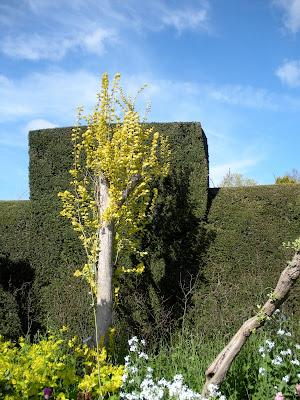 A golden elm glows like neon against a yew hedge. This tree, one of the gardeners told us, had Dutch elm disease, and had been radically cut back. It has since put out new shoots and seems to be recovering. I read somewhere that elms that are kept clipped, for example in a hedge, withstand the disease better, because the Dutch Elm beetles feed on dead wood. 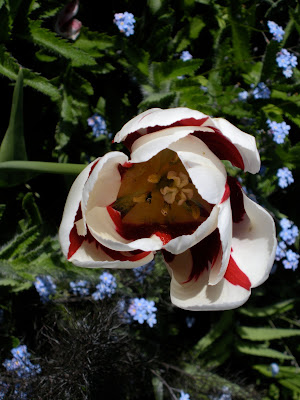 I think this is Tulipa 'Portofino', which garden writer Nigel Colborn says are "loathsome" and reminded him of blood seeping through bandages. I'm obviously lacking in taste - I thought they were gorgeous. They reminded me of raspberry ripple ice cream. 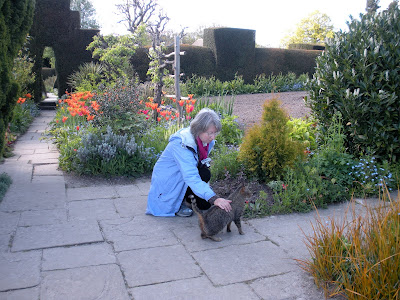 Frances with a cute little kitty! 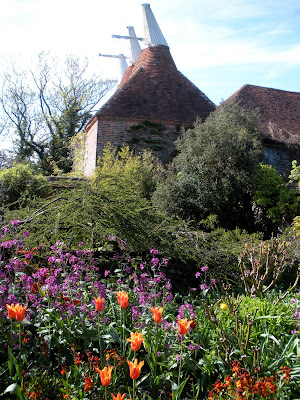 These are oast houses, which are common in Sussex and Kent, and were used in the olden days to dry hops for beer. Hops are still grown in Kent, but the picking is now mechanised and the drying is done on an industrial scale. 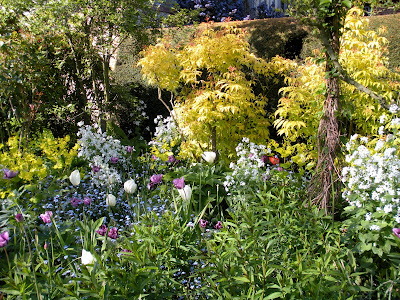 The vivid yellow of a sumach provides a dramatic backdrop to traditional spring pastels. Would you have put these colours together? No, nor me, but they work, don't they? I think it's because the purple of the tulips is just blue enough to be a pleasing contrast. 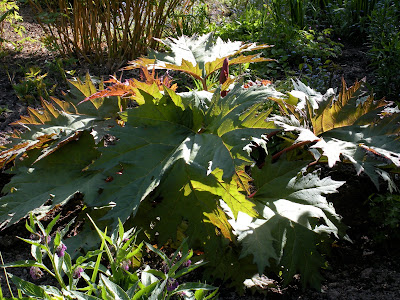 A stately rheum spreads its leaves in the sunshine. Rheum is definitely the plant of the year for me. I've seen it everywhere: Malvern, the Chelsea Flower Show, Sissinghurst, Great Dixter. Of course, I now have to have one.
Ooops, we've just got time for a quick detour on the way home. I couldn't let Frances and Gail go back to America without showing them a real medieval English castle, complete with turrets and moat. This is Bodiam Castle, a ruin, but quite beautiful. 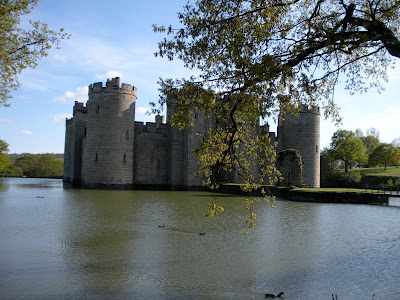 It was shut by the time we got there, so we contented ourselves with strolling round the moat. It looks an idyllic scene in the evening sunshine, doesn't it? It was freezing. 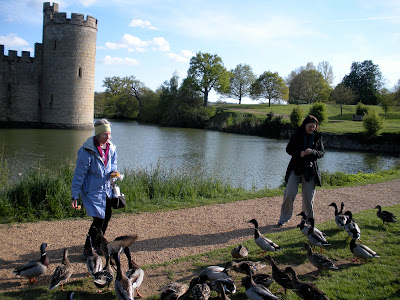 Frances and Gail being attacked by man-eating mallards.
Posted by Victoria Summerley at 10:52 PM