Finally, I've got rid of our old shed. It belonged to the previous owners of our house, and I've always hated it. There, at last I can say it. I HATED IT!
Why did I hate it? First, it was an overlap (or weatherboard) shed, where the slats of wood that form the walls overlap each other. Or, as frequently happens, the slats of wood do not quite overlap each other, and allow gaps for ivy to push its way in, for mice to gain entry and for water to seep through.
Second, the door had warped/fallen out of position, so it wouldn't shut properly. This meant that water was coming in via the walls and the door.
Third, the acrylic windowpane had broken. This meant that water was coming in via the walls, the door and the window.
Fourth, the roof was leaking. This meant that water was coming in via the walls, the door, the window and the roof. It was pretty darned wet in there.
My new shed is a shiplap shed, which is constructed on tongue and groove basis. This is much stronger and more weather-proof. The window is pristine and uncracked, the roof is sound, the shed is snug, and it smells gorgeous. I might even put up some little lace curtains and move in.
The old shed was on a concrete base, which was good and bad news. Good, because it was a solid base, but bad because I would ideally have liked a bigger shed. However, I couldn't bear the thought of reorganising the entire end of the garden, so the new shed is a replacement 6 x4ft.
I've also had a garden storage shed installed, which is a bit smaller (4 x 3ft). My idea was that the mower would go in here, leaving the shed free for me to put my tools in. To my horror, the mower did not fit in the 4 x3 shed. (You know that O......M.......G....... feeling when you realise you have made a ghastly mistake of some sort? It lasted about 10 minutes.)
I finally worked out that I could keep the mower in the shed, and put my tools in the store cupboard. Simple! 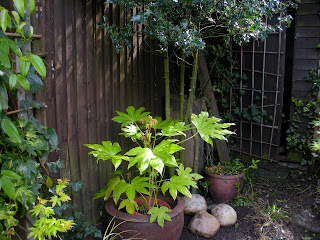 Here's the door to the old shed, which I had tried to disguise by adorning with a homemade trellis of homegrown bamboo. It sort of worked in my head 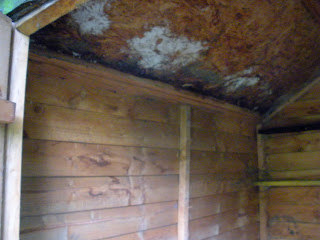 Water stains inside the old shed. If I was a conceptual artist, I could probably have made a lot of money charging admission to this. I could have said it was a statement about the effect of water on our lives. 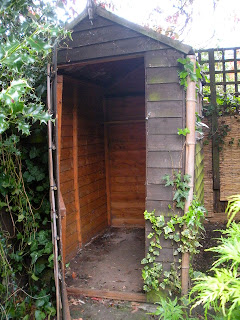 It didn't take long to clear out the old shed ... 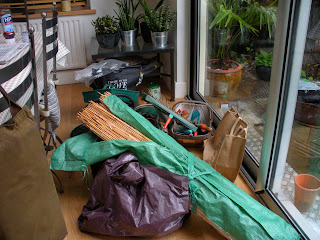 I just had to dump the stuff here... 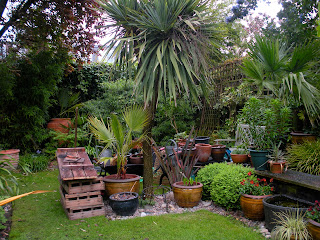 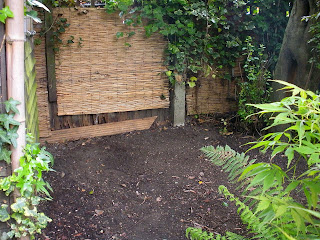 And clear this bit for the tool store... 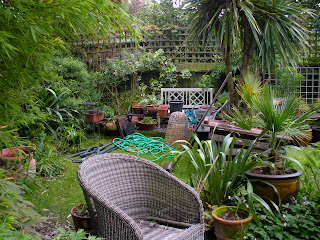 Oh, and here's some more junk. Martin, who helps me with the garden, did a lot of it, thank goodness. He took quite a lot to the tip too, and I suspect more will go. 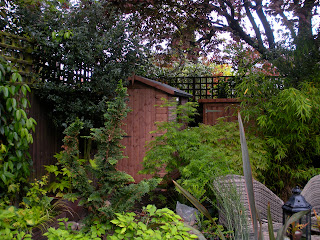 And here are the new sheds! 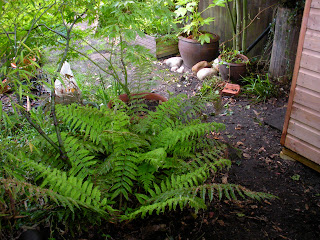 Not a single plant was harmed in the making of this post (or indeed the putting up of the sheds). I was very impressed. Huge thanks to Premier Sheds in Streatham for their work. 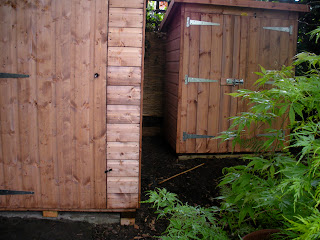 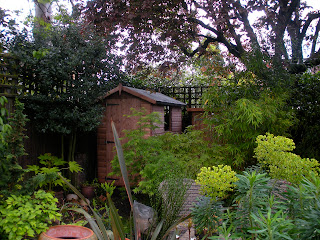 Oh, the relief of having a shed with a door that shuts properly. Oh, the relief of having TWO sheds with doors that shut properly.
So, only one dilemma remains. To paint or not to paint? Everything else in my garden is now painted in a sort of greige - like a stone colour. The old shed was stained very dark brown, which was good in that it disappeared into the corner, but bad in that it looked a bit like a black hole.  (And that was just from the outside.)
At the moment, I'm quite enjoying the natural colour of the wood. But I might get a bit of trellis and cover the window, so it looks as if it has glazing bars. I can never resist the urge to tinker with things.
Oh, and put up the lace curtains.
Posted by Victoria Summerley at 9:29 AM