Yesterday was medal day at Chelsea, the most nail-biting moment for everyone involved. If you're lucky enough to be at the showground first thing in the morning, when everyone sees their certificate for the first time, you can hear the whoops and cheers as the news sinks in.
Of course, gold is the top honour, but that shouldn't detract from the other medals. If someone wins a bronze medal at the Olympic Games, you don't say: "Huh, well, it was only a bronze." You think it's a pretty sensational achievement, because they are competing at the top of their particular field. It's the same at Chelsea. To win a medal - any medal - is an acknowledgement that you have reached a certain standard. Add to that all the incredibly hard work that goes into creating a Chelsea show garden or nursery exhibit, and the medal-winners jolly well deserve some sort of accolade.
Unlike the Olympics, however, the gardens and exhibits at Chelsea are not in competition with each other. One garden doesn't get a gold because it is "better" than another garden - it is judged against its own brief, in which the designer tells the judges what he or she is aiming to achieve. The planting, the quality of the hard landscaping (or build, as it's known) and the overall design are all taken into account, by judges who have expertise in those particular areas.
Of course, there are the nurseries and designers who win gold medals year after year. Hilliers, for example, or Bloms Bulbs; Andy Sturgeon or Cleve West. But that's not because they're friendly with the judges, or because the RHS feels it would be a shame if they broke their 62-gold-medal run. It's because, year after year, they sustain a level of excellence.
You can see the full list of results here but I thought I'd pick out my favourites.
There's one glaring omission, however, which is Cleve West's garden for Brewin Dolphin. It won a gold medal and Best in Show, but I'm going to Chelsea tonight to have a personal tour with Cleve, so I'll do a separate post on that tomorrow. 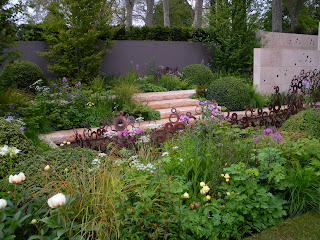 Andy Sturgeon's garden for M&G Investments, the sponsors of the Chelsea Flower Show. Andy has turned the typical rectangular Chelsea plot on its side, using the steps as a focus halfway along the pool. The metal bubbles sculpture is echoed by the wall, with its bubble pattern, and the huge clipped topiary balls. If you crouch down, so the plants are at eye-level, the bubbles almost seem to be emerging from the planting, echoing the round blossoms of the peonies. This is a garden that looks good from every angle, and thoroughly deserved its gold medal, in my view. 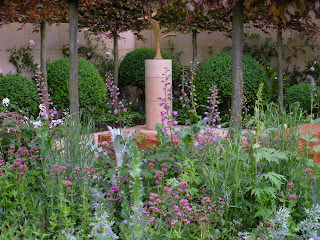 Arne Maynard's garden for Laurent-Perrier also won a gold medal, as everyone had been predicted, but it wasn't one of my favourites. I found the pleached copper beeches rather sombre and depressing, while the exuberant planting beneath was confusing - it was difficult to know where to look first. I should point out that I was in a minority - Anna Pavord, for example, loved it.
I think I'm becoming slightly allergic to pleaching, on the grounds that it's expensive, which automatically puts it outside the reach of the average gardener. With topiary, you can take your own box cuttings, grow them on, and clip them into your very own topiary ball - all you need is patience, skill and a good eye. But an avenue of pleached trees seems to say: "We cost a lot of money." (Anything from £200 upwards per tree.)
There's a garden across the road from me that has a screen of pleached hornbeam along the back fence. (There's a Porsche and a BMW in the front garden, too.) I'm not normally susceptible to twinges of political puritanism, but for some reason, the sight of it always irritates me. 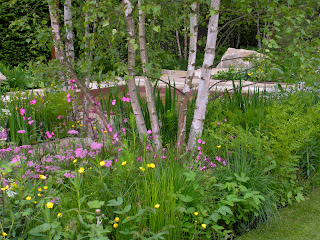 This is Sarah Price's garden for the Daily Telegraph. I'm not a huge fan of naturalistic bits-of-English-countryside planting, unless they happen to be in the middle of the English countryside, so from a personal point of view, this is not really my sort of thing. But I have to admit it is beautifully done, and the judges obviously thought so too, because it won a gold. 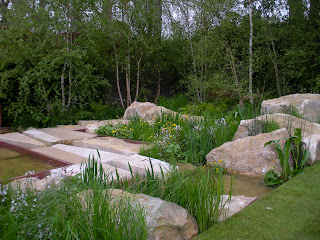 I wasn't at all keen on the central paving-cum-water-feature, though. Sarah Price had used huge natural boulders for her garden, which I loved, but I found the sudden appearance of stone cut into geometric shapes in the middle of it rather incongruous. It gave a weird optical illusion (which may of course have been intentional) that the stones were tilting upwards slightly. As one very grande dame of gardening confided to me: "It made me wonder whether I'd had too much press day champagne". 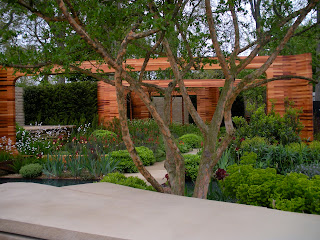 Joe Swift's garden for Homebase and the Teenage Cancer Trust. I was knocked out by this. I loved the unusual colour palette - copper, green and white - and the choice of plants, which included Euphorbia mellifera, Libertia formosa and fabulous bearded iris. It was a much more romantic garden than I had expected, although the chunkiness of the cedarwood screens kept it well away from any tendencies to tweeness. These gave the impression of enclosure without being at all claustrophobic, and also served to frame the views of the garden. Like Andy Sturgeon's design, this looked good from every angle. It was Joe's first garden for Chelsea, and it won a gold. 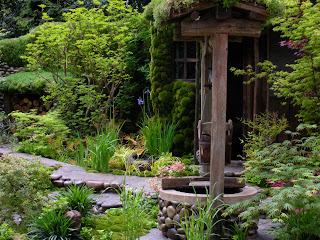 In the Artisan Garden (ie small gardens) section, there were also some gems. This is the Satoyama Garden, designed by Kazuyuki Ishihara, and inspired by the Satoyama, which is the space between the lowlands and the mountains. It's about the link between nature and daily life, and the importance of living in harmony with the environment. 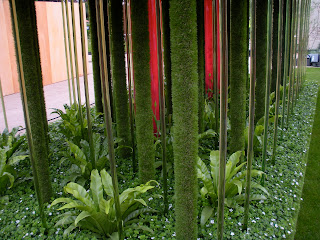 Tony Smith's "Green With..."is in the new Fresh (ie conceptual/modern) category at Chelsea. It deals with the emotions of desire and envy, using moments from gardening history to illustrate this. There are tulips, for example, representing tulip mania, the moment in the 1630s when the competition to acquire the very latest bulbs led to prices rocketing up. The ferns are a reference to "Pteridomania", or Fern Mania, during the 1940s. The Victorians became obsessed by ferns - which until the 19th century and the invention of Wardian cases were difficult to grow in Britain. Societies were founded, botanical gardens were visited and "fern-hunting" in the wild became a craze, with the inevitable result that the countryside became denuded of its native ferns. But I digress. The grass is artificial Easigrass. 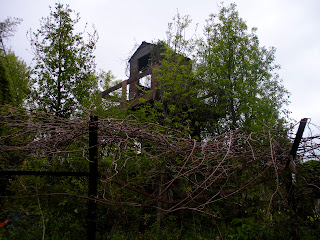 Jihae Hwang's Quiet Time, which marks the 60th anniversary of the conflict between North and South Korea, suffered somewhat from its position in the showground, which was directly beneath Diarmuid Gavin's tower. It is an evocation of the Demilitarised Zone, which is 250 kilometres long and one of the most heavily guarded borders in the world. However, this has resulted in the vegetation being allowed to grow undisturbed, overlooked by watchtowers.Wonderful concept - well-deserved gold medal. 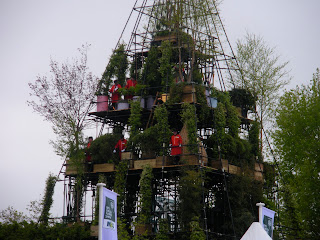 Diarmuid Gavin's tower for Westland Horticulture, which featured a stainless steel flume, and a miniature gentlemen's club, won a silver-gilt medal, and the Most Creative Show Garden prize, which has not been awarded for five years. Everyone always has strong opinions about Diarmuid's designs - I loved it, but garden designer John Brookes described it as "attention-seeking" and wrote in the Daily Telegraph that both Diarmuid and the RHS deserved a slap. It just goes to show that you can't please all people all the time, but if you offer them an 80ft helter-skelter, some of them will be very pleased indeed. 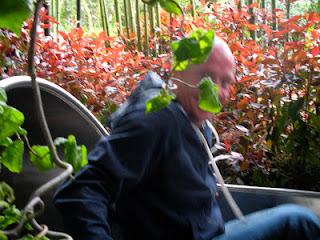 Posted by Victoria Summerley at 3:40 PM