Chelsea Flower Show 2012: a private view of the Best in Show garden

I first met Cleve West, designer of the Best in Show garden, in 2002, when I was editor of The Independent Magazine. We were looking for a second gardening columnist - someone who would address a slightly different audience. Anna Pavord, who writes in the magazine every week, has always had a garden in the country, and while Anna's column is very popular, she felt it would be good to have something that talked to urban gardeners, and to the growing number of people involved in the Grow Your Own movement.
I'd always been impressed by Cleve's work, and felt that he was underrated. I knew he was more interested in contemporary garden design than in the traditional English garden look, and that he had an allotment, so he seemed an ideal choice for us.
He comes across as quite a shy, reserved person, but he has a dry sense of humour and is incredibly kind. I remember he came into the office for lunch, and was soon chatting away to the picture editor (he's a keen photographer) and the rest of the staff. He charmed everyone.
Since then, Anna and I have followed his progress with a proprietorial (verging on the maternal) interest, even though Cleve left the magazine a few years ago. We were delighted when he won Best in Show at Chelsea last year - even though he was sponsored by the opposition, the Daily Telegraph. And we were even more thrilled when he won it again this year. 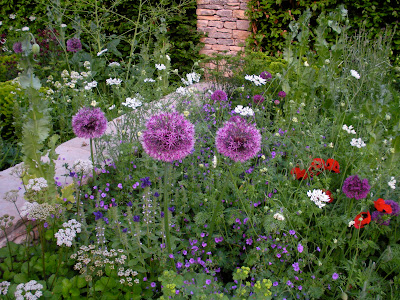 Cleve's design philosophy is very much like Cleve himself - thoughtful, creative and considerate. He himself sums it up thus: "Architecture, surrounding landscape, site specifics all inform the creative process from the start. Drawing on the spirit of the place involves sensitivity to these elements and to the particular needs of the client, not to mention the welfare of the environment."
His 2012 Chelsea garden, for investment managers Brewin Dolphin who are celebrating their 250th anniversary, is the closest I have seen Cleve come to a traditional English garden. It features topiary in the form of huge yew shapes, beech hedging and reclaimed limestone. The planting is a romantic mixture of cottage plants such as poppies, alliums, cow parsley, cornflowers and orlaya, which creates a soft contrast with the stone pillars and the uncompromising shapes of the yew. 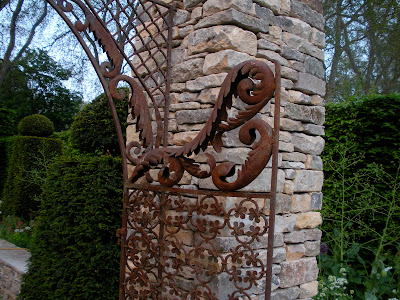 There are unexpected features - the use of the stone pillars with their antique iron gates at the front of the garden is quite unusual and helps create an air of mystery and intrigue. This is not a garden built for barbecues or to show off to the the neighbours, but you could imagine yourself wandering in, sitting down and reading a book, with the hum of bees and the sounds of birds for company. 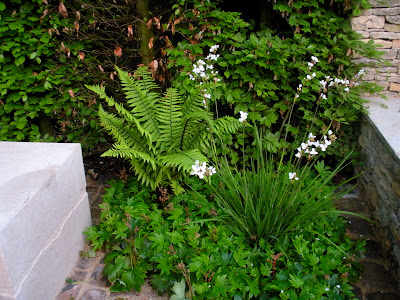 There are lots of little vignettes of planting, around the trees or the paving. Above, the white flowers of Libertia formosa light up a shady corner. 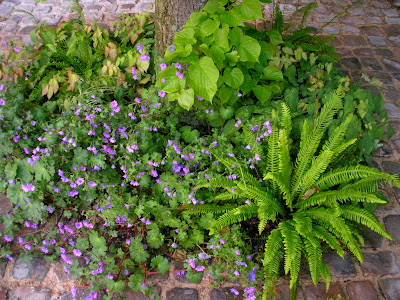 Ferns such as this one, Blechnum spicant, add structure to the little groups of plants. 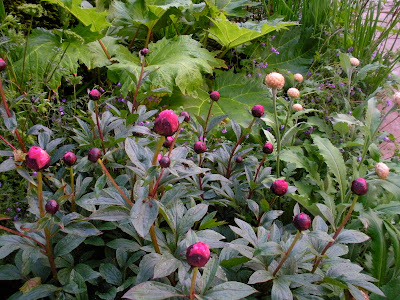 There are injections of colour, from the peonies above, and the euphorbia, below. 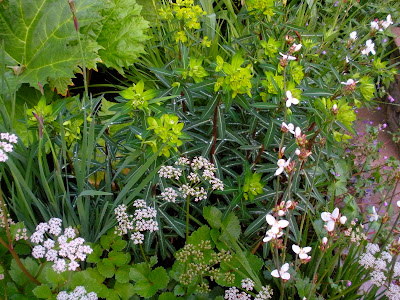 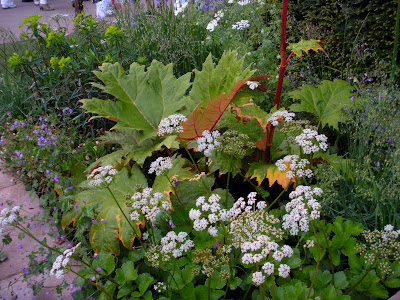 And wonderful contrasts in texture, such as this grouping here, with the stately leaves of an ornamental rhubarb (rheum) softened by the lacy flowers of the umbellifer. 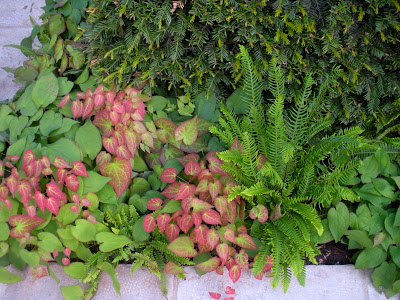 The red-tinted leaves of an epimedium, with another fern, at the base of a yew pillar. 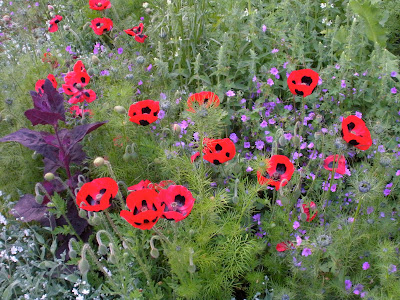 I think the favourite ingredient, however, for Chelsea visitors, will be the red ladybird poppies, which provide one of the jolts of colour which are a trademark of Cleve's planting. 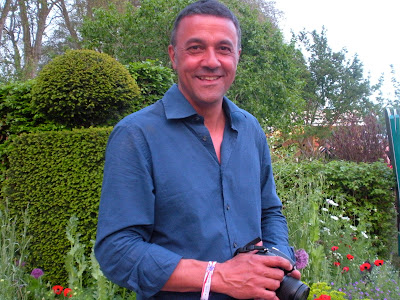 Cleve himself in the garden yesterday evening. It seems only fair that the man who once dreamed of winning a gold medal at the Olympics (he was with the Epsom and Ewell Harriers until an injury put paid to his dreams) should have won gardening's highest accolade in the year of the London's Olympics. 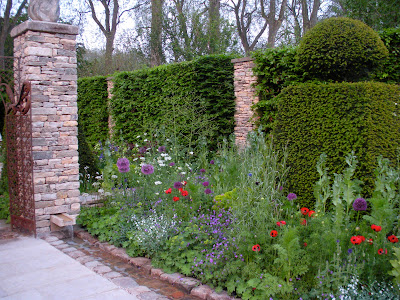 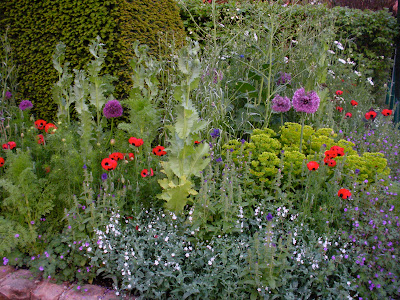 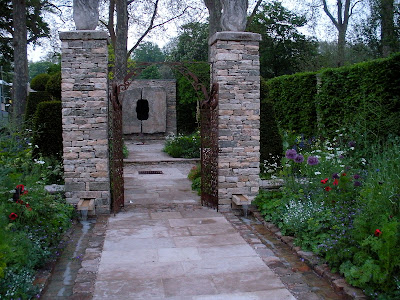 Posted by Victoria Summerley at 9:09 AM