Chelsea Flower Show 2012: There's nothing like a bit of bling 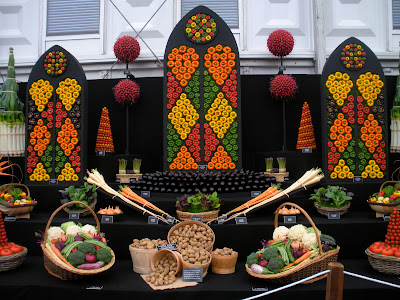 A lot of attention is paid to the show gardens at the Chelsea Flower Show - and quite rightly. However, each year in the Great Pavilion, where the nurseries show off their skill, you will find the most astonishing stands. Some are from the nurseries or producers close to home, such as the exhibit above, by the Jersey Farmers' Union, inspired by stained-glass windows. A gold-medal winner, I predicted - and I was right!
Many of the most spectacular are created by overseas exhibitors, such as the Nong Nooch Tropical Botanical Garden from Thailand, below. Most are celebrating their native flora - but they do it in the most fantastically theatrical way. Even if you know you'll never be able to grow vanda orchids or heliconia in your garden, you can't help but stop and gaze, open-mouthed at the sheer gorgeousness. 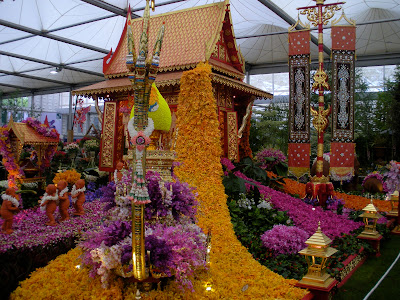 Much of the Nong Nooch display is created not with plants (although there are plenty of orchids), but with petals, thousands of them, which are used to cover every surface. 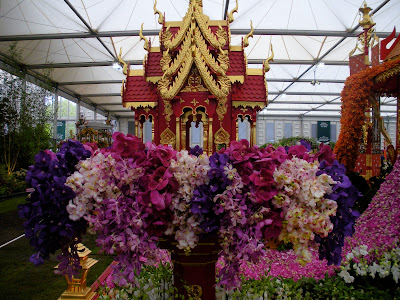 The Nong Nooch stand is huge, and there is something different to look at from every angle. 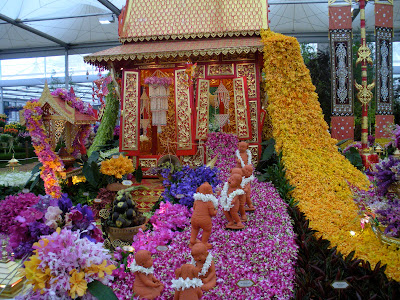 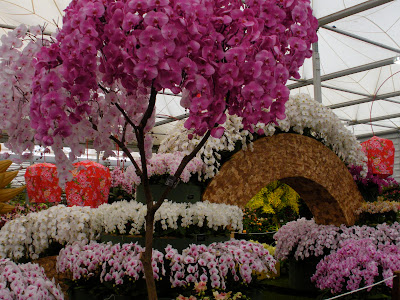 This is the Taiwan Orchid Growers Association display, designed like a traditional Chinese garden, with trees hung with orchid "blossoms" and Chinese lanterns. 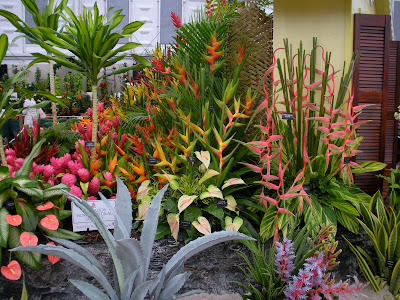 Barbados Horticultural Society showed off an astonishing variety of heliconia (the plant that looks like lobster claws) and anthurium. The bromeliad at the front, on the right, with the amazing blue flowers and red stems, is an aechmea. I'm not sure which variety this is, but if you want one to grow as a houseplant, look out for 'Blue Rain' or 'Blue Tango' 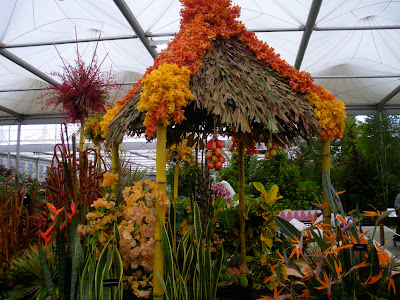 Jamaica's exhibit, with strelitzia (bottom right) and sansevieria. I always used to hate sansevieria, which is the sort of dusty houseplant you see in dentists' waiting rooms, but grown in the garden, it looks wonderful. (Have to bring it in during the winter, of course). 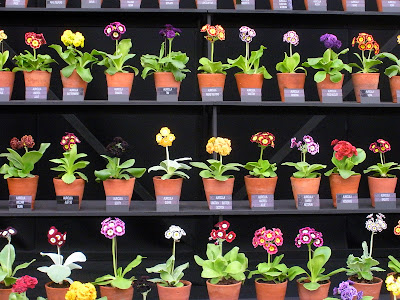 Finally, you can't much more theatrical than an auricula theatre! This is the W & S Lockyer stand, which also won a gold medal.
Posted by Victoria Summerley at 9:28 AM