For these, we have to thank Sir Harry Veitch, who ran the James Veitch and Sons nursery in Chelsea and who, with his father, was responsible for sending out plant hunters to bring back so many of the species that we now take for granted from around the world. Appropriately, he was born in 1840, the year that Veitch Nurseries sent out the first of their plant hunters, William Lobb, to South America. (Lobb brought back monkey puzzle (Auraucaria), fuchsias, escallonias, ceanothus, and many conifers including Wellingtonia.)
As the horticulturalist and Veitch expert Caradoc Doy points out: "You would be hard-pressed to find a garden in Britain which does not either contain a 'Veitch' plant, or one derived from one of their collectors or hybridists."
For the past few months, Caradoc has been putting together a Veitch exhibit for the charity Plant Heritage at the Chelsea Flower Show. It included a life-size portrait of Sir Harry, surrounded by many of the plants he had helped introduce: streptocarpus on the Dibleys Nurseries stand; orchids from the Orchid Society of Great Britain; maples from the Hippopotterings nursery, Enterprise Plants' begonias and so on. 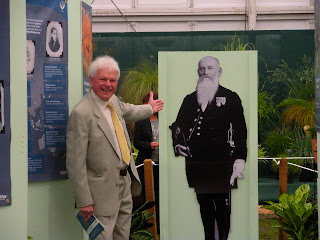 It was awarded a silver-gilt medal after being formally opened by Roy Lancaster, who has followed in the footsteps of many of the plant-hunters. Roy described Veitch as a great Victorian - a man with heart and soul, who was as active in charitable work as he was in his nursery business.
Sir Harry also had a role to play in the Chelsea Flower Show, which celebrates its centenary next year. In 1912, he organised a one-off horticultural exhibition in the grounds of the Royal Hospital, Chelsea. It was so successful that the Chelsea Flower Show has been held there ever since.
Dispatching plant hunters all over the world may be a speculative venture, but Sir Harry knew that this was not a get-rich-quick enterprise. The fruits of an expedition might not arrive for years, and then the skills of the hybridists and propagators would determine whether any new species, or cultivar, was going to be popular and profitable. 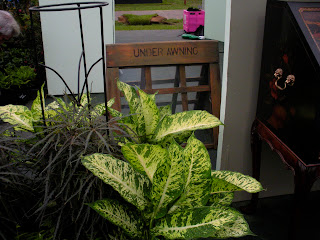 Transporting the plants back from South America, or China, or wherever they had been collected, was also a complicated business. The plant material had to survive journeys of thousands of miles, and protecting them was made easier by the invention of the Wardian case, by Dr Nathaniel Bagshaw Ward, a keen naturalist, in around 1829.
There's a reproduction in the picture above, and as you can see, it's a fairly utilitarian affair. The triangular shape, and broad base, meant it was more stable for sea voyages. Until the repeal of the window tax in 1851, however, glass was prohibitively expensive. The Veitch plant hunters needed hundreds of these cases, and they cost a fortune.

Plant-hunting was a dangerous activity too - still is, as Tom Hart Dyke can tell you. He was captured by FARC terrorists in South America while hunting for orchids in 2000. Men who gave their names to some of the best-known garden plants - David Douglas, Reginald Farrer, Henry Chesterton - all perished thousands of miles from home. As recently as 1901, seven out of a party of eight orchid hunters died on an expedition to the Philippines. One was eaten by a tiger.
Ernest Wilson, who was sent out to China for Veitch in 1899, is the subject of one of my favourite plant-hunting stories. Veitch was keen to acquire the handkerchief tree, Davidia involucrata, which had been discovered by Pere David in 1868.
Wilson, who was only 22, and didn't speak a word of Chinese, got on the trail of a specimen that had been seen by the Irish plant hunter, Augustine Henry, 12 years earlier. He finally arrived in Yunnan, after surviving an attack by bandits, a serious illness and the capsizing of his boat in rapids, only to find that the tree had recently been cut down. I often wonder what he said - and whether it was spelt with a lot of asterisks...

Posted by Victoria Summerley at 8:40 AM