I was idly looking out at the garden today when I saw a flash of red. Intrigued, I crept closer and saw a black and white bird with a red head sidle up the trunk of the Montezuma pine before launching itself at the fat ball feeder. A woodpecker!
But which woodpecker? I ran to the computer and called up the RSPB site. There are three woodpeckers found in the UK, the great spotted, the green and the lesser spotted. The great and lesser are quite similar except that the lesser spotted is smaller and has a distinctive red head.
Not only that, but while the great spotted is reasonably common, the lesser spotted is on the red list, ie globally threatened. OMG! Was this a lesser spotted?
I rang up the RSPB London branch (well, I had to tell someone) and agreed that I'd try to get a picture. I didn't hold out much hope, but the woodpecker seemed to have made a beeline - or perhaps that should be a woodpeckerline? - for the fat ball feeder, so it had obviously dined there before.
Sure enough, about a couple of hours later, there it was again on the trunk of the pine. This time I got a picture - and this time I could clearly see that it was a great spotted, with the distinctive white bar, like an upraised finger, on its side. Apparently, the juveniles have quite red heads and this is what had misled me.
Never mind. It's nice to see a woodpecker of whatever variety in the garden. 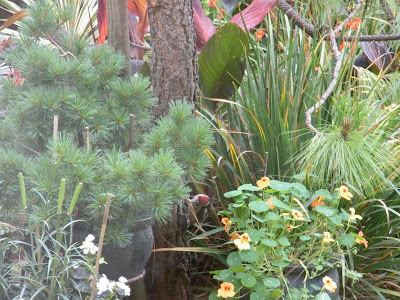 Sorry about the quality of the pictures - I had to take them through the glass as I didn't dare open the doors for fearing of scaring the bird away. Here's the red head that first attracted my attention. 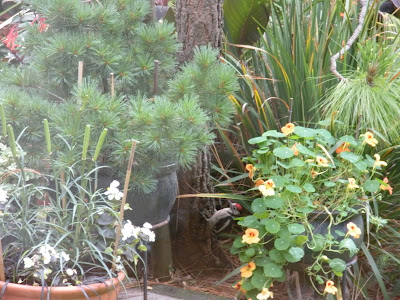 The woodpecker seemed quite interested in the tree itself. The Montezuma has really thick, rugged bark and while I was trying to take these pictures, the bird kept disappearing for ages around the other side of the trunk. 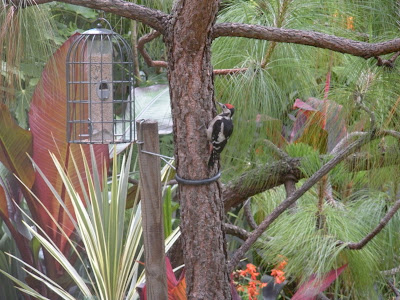 Here's the bird side-on, and you can now clearly see the distinctive white shoulder patch. 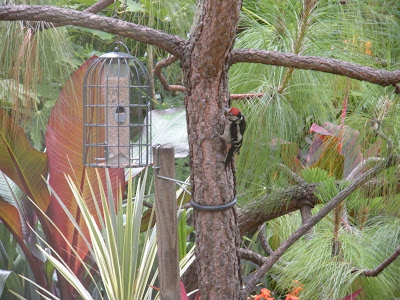 It seems to be having a look at the seed feeder, but it didn't actually feed there. The fat ball feed is on the righthand side of the tree, out of shot. 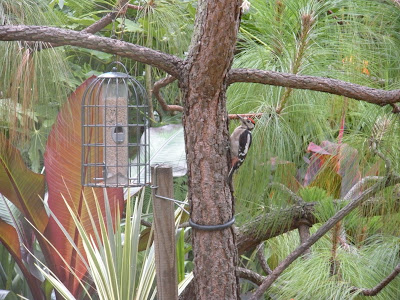 The typical woodpecker pose. I've written before on this blog about feeding the birds all year round and as you can see, it certainly pays off.

Posted by Victoria Summerley at 2:07 PM