So what do I get out of it? 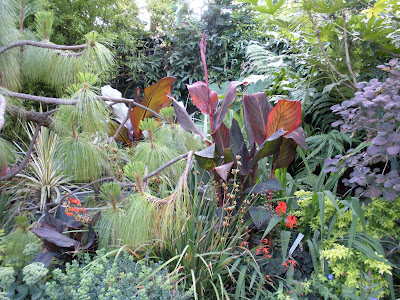 I'm in panic mode at the moment. I have a week to do all the gardening tasks that I've been promising myself I'll do for the past three months. (I can see at least two of them in the picture above: trim the box and deadhead the libertia.) And then there's the cakes. Oh, joy.
It's got to the point where people ask me if I'm opening my garden again. I hadn't really thought about this, beyond reflecting that it was sweet of them to take an interest, but I suppose it means that it is now established as an annual event, which is rather nice.
Lots of people also ask me what I get out of it, apart from raising money for charity, of course. There is a lot of work, about which I make a lot of fuss, and it would be silly to pretend that there weren't stressful or tiring moments. People say things like: "I suppose it must be nice when people come round and tell you your garden looks lovely."
Well, that's true, but what I most enjoy is seeing other people enjoy the garden. I was trying to explain this to a friend the other day and the best analogy I can come up with is this:
Imagine that you've gone out for the evening with friends, new or old, and at the end of the evening they say: "You look absolutely wonderful." That would be great, wouldn't it? But wouldn't you be even more pleased if they said: "We've had the most fantastic time, it was so lovely to see you again. We always enjoy going out with you so much."
I've never been sure whether I garden for an audience or not. I spend a lot of time alone in the garden, doing chores or just daydreaming, and I'm quite happy like that. The kids never notice anything new, particularly in the way of plants. It doesn't bother me: I don't drag them out to look at things.
My mother, on the other hand, says she finds gardening far more satisfying if someone comes round and admires the results.
I don't think I look for admiration, because if someone didn't like the garden, frankly, my dear, I wouldn't give a Darmera peltata. But I like it when the results give pleasure to someone else, which is slightly different, I think.
My husband used to enjoy the garden tremendously. He'd say nice things about what I'd done, sure, but what I liked most of all was the way he revelled in the discovery of the first ripe plum, or the appearance of the first flower or leaf on a treasured plant. I loved his enthusiasm.
I'd never thought about this before, but although I was quite keen on gardening before Craig and I got together, I didn't really have the courage of my horticultural convictions (such as they were) until we had our first garden as a couple.
In the same way that Craig gave me the confidence to be myself (he regarded my legendary bad temper as a vital tool for producing newspapers on time rather than as an acute personality defect), he gave me the confidence to garden for myself. If I'd said to him: "I think I might plant a huge cactus in the middle of the lawn," he wouldn't have looked disapproving and asked me if I really thought that was a good idea. He'd have just said: "How big a hole do you want me to dig?"
I miss him. Perhaps that enjoyment and enthusiasm is what I'm trying to recreate by opening the garden.
Posted by Victoria Summerley at 9:54 PM