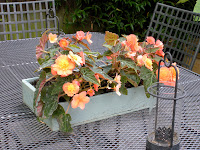 To be honest, I found opening the garden for the National Gardens Scheme really tiring this year. I didn't sleep very well the night before and got up around 6.30am to make a cup of tea and feed the cat. Then my daughter drifted downstairs to say she had an ear infection and had been in pain all night. I drove her to the walk-in clinic at the nearby hospital, which luckily opens at 7am, even on Sundays. We got home, I settled her down with some antibiotic drops in her ear and went to "sit down for five minutes". Two hours later, I woke up in a major panic. It was 10am and I had four hours in which to ice 14 cakes, make two Victoria sponges, get out tables, chairs, cups, plates, notices, tickets, cash float, etc etc etc.
We managed to get ready in the nick of time, which was just as well, as when I went to open the gate, we had a queue of people waiting. Everyone said lovely things about the garden, but the weather decided to be rather spiteful and at about 3.30pm, we were treated to lashing rain and a howling gale.
We managed to get everyone inside, and after about half an hour, just as I was thinking we would have to have a sing-song or something to entertain everyone, the weather cleared. The day ended with a clear blue sky and bright sunshine, but the damage had been done and I think a lot of people had been put off.
The bloggers made a good show, though. I'd like to say a huge thank you to Emily and Ms B, and Rob and The Fat Gardener. I was so touched that you all came - it made my day.
In all, we had 92 visitors. At the time I was a bit disappointed - we had 166 last year - and I started to wonder whether all the hard work was worth it.
I think it was exhaustion that made me feel so negative, because after a day's rest I'm beginning to think we did pretty well, considering.
This morning, some workmen turned up to re-sand my living room floor, and they were so complimentary about the garden, that cheered me up too.
So I'll stop whingeing and let the garden speak for itself instead. 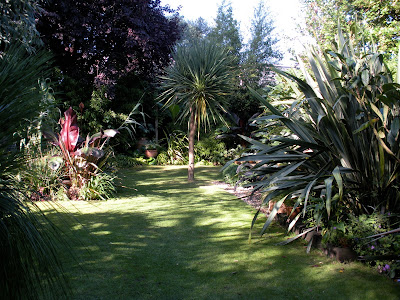 This is one of my favourite views. It's not a particularly attractive shot of the garden, but this is how it looked the morning after. It's the one day of the year when I can walk out into the garden and really revel in the knowledge that I don't have to do anything. 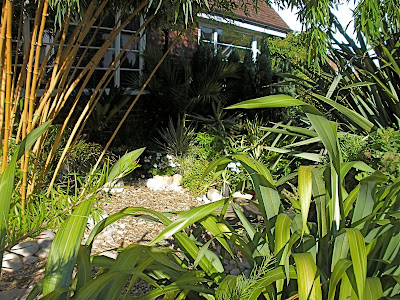 This is the front garden, looking strangely respectable. I decided I needed to tart it up a bit, since this is the first thing visitors see, so I've started using large cobbles to break up the expanse of gravel and I think it's working well. I'll do a separate post on it at a later date. 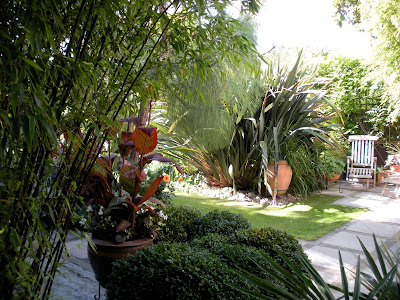 This is the first view visitors have of the back garden as they come down the side passage and turn the corner. 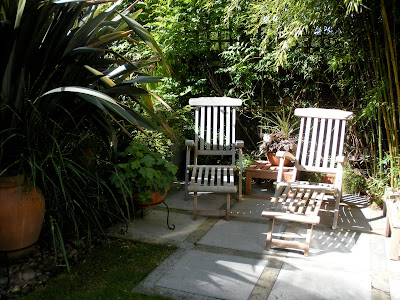 Opposite are the steamer chairs, inviting people to sit down and relax 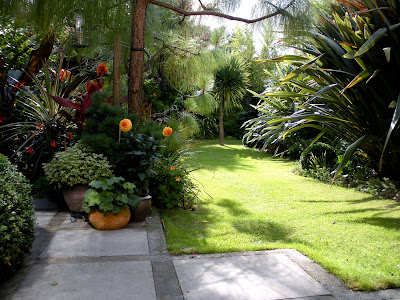 This is a better overall view of the garden, taken in the afternoon, when the light is better. 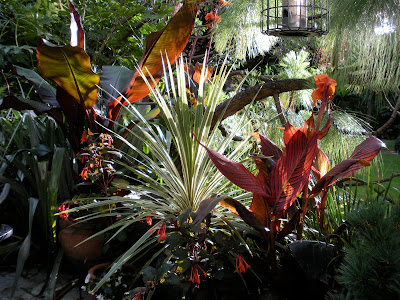 Here's a closer view of the "hot border", with, from left, Ensete ventricosum 'Maurellii', (red banana), Fuchsia 'Thalia' (rescued by my neighbour from the dump), Cordyline 'Torbay Dazzler' and Canna 'Durban'. There are some people who will hate this combination and think it vulgar... 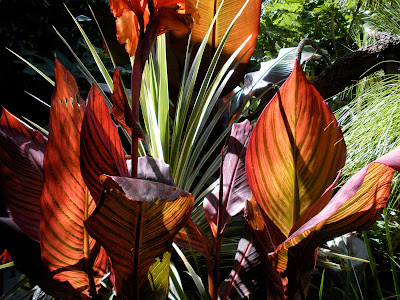 ... but how could this not make your heart sing? 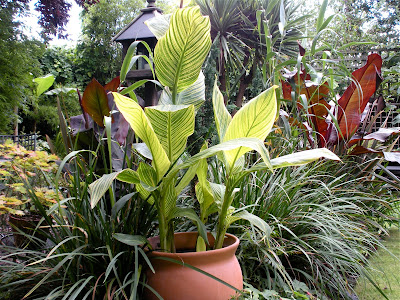 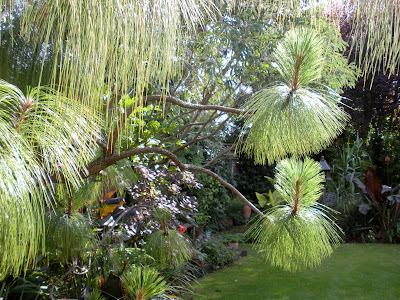 It's not all variegated foliage, though (as I'm sure James Alexander-Sinclair will be relieved to hear). Here's the Montezuma pine, whose extraordinary needles look at their best this time of year. They shimmer in the sun and in the rain, they look as if they are bedecked with thousands of tiny crystals. 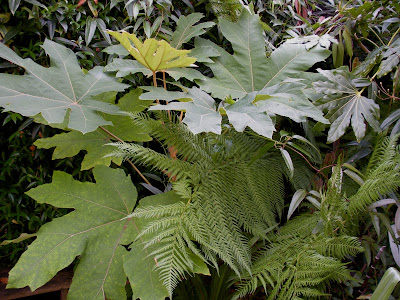 The huge leaves of Tetrapanax papyrifera make a great foil for the extravagant fronds of the tree fern, Dicksonia antarctica 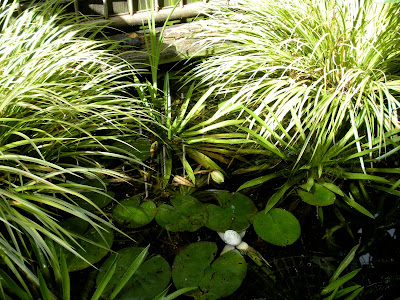 Oops, some more variegated leaves in the pond. This is Acorus gramineus 'Ogon', which is possibly the lowest-maintenance pond plant I have come across. In the centre is a white waterlily, 'Highlight', and the spiky things that look like submerged cordylines are water soldiers, Stratiotes aloides. Despite their exotic appearance, they are native to Britain and Europe. 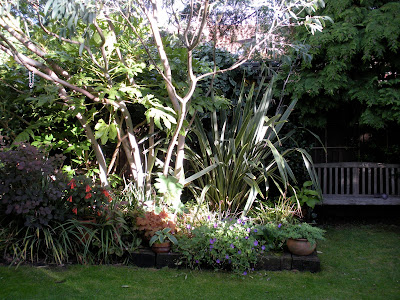 Here's a view I don't often show you. This is the snow gum, Eucalyptus debeuzevillei, which comes from New South Wales. It's a great little tree - so much more delicate and user-friendly than the giant E. gunnii which seem to grow like weeds in London. This one has been stooled - ie cut right back when young - so it is multi-stemmed. I always think eucalyptus can look a bit drab, but this one looks wonderful with the sun on its pale bark. 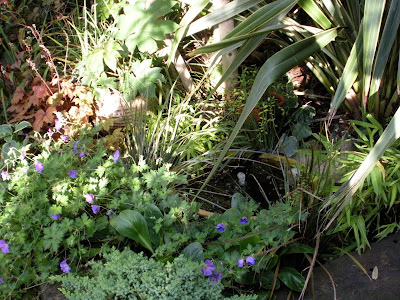 Here's the pond known as the frog pond beneath the eucalyptus. The geranium is 'Rozanne', one of the most reliable hardy geraniums when it comes to summer-long flowering. It just goes on and on. The miniature bamboo is Pleioblastus auricomus and the heuchera on the left is 'Sweet Tea'. 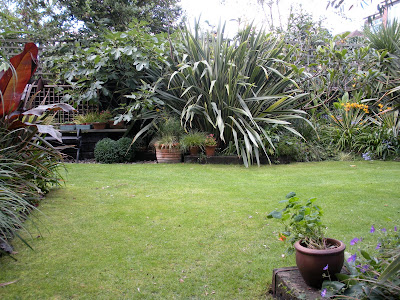 This is the view from the bench you can see in the picture of the eucalyptus. I've tried to plan the garden so that wherever you sit down, there is something interesting to look at.
I hope you've enjoyed this mini-tour. If you want to read more about the National Gardens Scheme, Karen has a post about it here.
Posted by Victoria Summerley at 10:15 PM