Describe your garden in 50 words 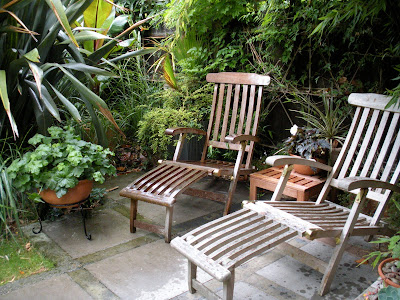 It's raining here, so having racked my brains - not very hard, it must be said - for garden chores I can do in a steady downpour, I came inside for a cup of tea and a quick flick through The Garden, the monthly magazine of the Royal Horticultural Society, which arrived this morning.
One of the things I turn to first is Ursula Buchan's column, which this month mentions that it's time for all National Garden Scheme owners to fill in the application to open their gardens for next year.
"Much thought is given," says Ursula, "to the short description of the garden. How do you encapsulate so many years of planning triumphs, disasters, rethinks and incremental improvements in a few terse sentences?" Well, quite.
It's strange, but although I'm rarely at a loss for words when it comes to writing my blog, I find it very difficult to describe my garden. There are several problems.
First, I don't want to sound pompous, or pretentious, or boastful. Yet I do want to write something that will make people want to come and see it.
Second, one has to beware of mentioning features that may have disappeared - or reappeared - by next year. For example, I used to say I had three ponds, a big one and two little ones. (One visitor took issue with this, saying that two tubs of water hardly added up to one pond, let alone two.) However, this year, I have converted the less successful of the two small ponds into a kind of squelchy bog garden, with colocasias and a sarracenia. I only did it the other day, so although I'm very pleased with it, it's too early to say whether it is going to work in the long term. Next year, it may not be there. 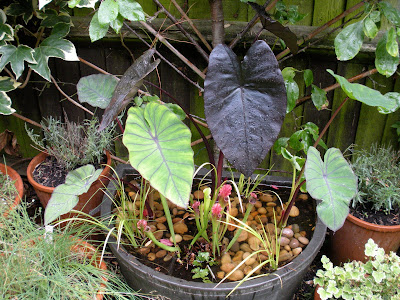 The colocasias are 'Hawaiian Eye' (I think) and 'Blue Hawaii'. I can't tell you what the sarracenia is because the label is buried beside it and I didn't fancy dabbling around trying to retrieve it. Not with a camera in my hand, anyway.

At one point, my description used to mention a screen of Arundo donax, the tall Spanish reed, masking the trampoline from view. When I got rid of the trampoline, I forgot to edit this bit out, to the great disappointment of another visitor. (How can anyone look forward to seeing a trampoline?) I hope she doesn't come back this year, because I've ripped out most of the arundo as well...
Third - I can't think of a third. At the very thought of writing my garden description, my brain has begun to freeze over. How would you describe your garden? To make it even more challenging, we'll set a maximum length of 50 words.
Posted by Victoria Summerley at 1:57 PM