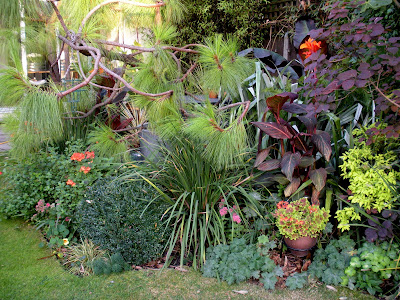 I might have known that the weather gods would read my blog. No sooner had I burbled on about the lovely weather we were having, when the temperature dropped. I think it was my punishment for describing September as Indian summer when, as Lia Leendertz so rightly pointed out, it isn't really an Indian summer until October.
We still haven't had much rain though, apart from a downpour yesterday evening. There's nothing worse than grey, cold weather, is there? Cold and sunny is lovely, and so is hot and sunny. I don't even mind the wet - at least the garden is getting a soaking. But watering when it's grey, cold and windy is a truly miserable, shivery affair.
So I thought I'd cheer myself up by posting this picture of the garden this autumn and comparing it with 2007, which is when the picture at the top of my blog was taken. All in all, I think things are looking better.
I used to think my diseased cannas looked all right. They grew, they flowered: what more do you want? But having replaced them with new plants, I can see that the new foliage is far superior to the virus-ridden leaves I had before. I'm sure even the orange of the flowers is more intense.
Gary commented the other day that he wanted to give cannas a go next year. I'd say go for it, Gary. Make sure you buy really good plants in the first place (don't buy anything that seems to have brown streaks or damage on the leaves). You can grow them from rhizomes, of course, but it will take longer for them to bulk up. I have mine in pots because it's easier to move them into a dry place in winter (such as the shed or a garage). Cut them down to soil level (a bread knife is good) after the first frosts and bring them out again once the weather warms up a bit in late spring.
The hardy geraniums in front of the canna (and the pot of variegated pelargonium) don't look as bushy, but that's deliberate. It's a blue variety (not sure which, as it was a pass-along plant) that flowers only once, in late spring, and I've been surreptitiously ripping chunks out, ready to replace it with a variety that will flower all summer long. I did think of G. 'Blue Sunrise', which I love, but I don't think it's quite sunny enough there, so I might try something else.
This photograph was taken later in the year than the one at the top of my blog, so the crocosmia (the orange patch between the two cannas) have long since disappeared. And can you see how the little fluffy euphorbia has wriggled along the border from one side of the box ball to the other? It hasn't really moved, of course, just died down in one place and seeded itself in another. It's Euphorbia cyparissias 'Orange Man', which I love for its texture, and it self-seeds all over the place.
Other prolific self-seeders in the garden include Erigeron karvinskianus, the Mexican daisy; Libertia grandiflora (the spiky strappy thing next to the box); all the euphorbias, especially E. mellifera which seems to have a determination to reproduce itself that is nothing short of Biblical, and nasturtiums.
This year, a whole bunch of nasturtiums decided to self-seed under the fig tree, which comes into leaf relatively late. Imagine their horror when it finally unfolded its long green leathery fingers. You could almost hear them asking who switched the lights out. Better luck next year, chaps!
Posted by Victoria Summerley at 8:31 PM