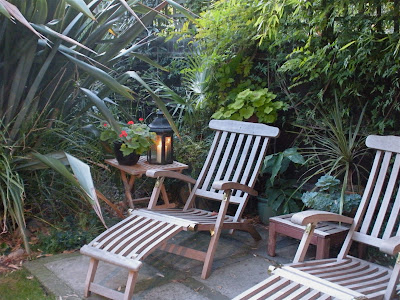 I'm supposed to be on holiday this week, the builders are installing a new bathroom, my daughter's off school and everything in the garden is lovely.
Sort of. I'm actually spending most of this week helping a friend with a magazine project, the builders are not so much installing a new bathroom as deconstructing the old one and every time I get my head around cooking a meal, one or other of my teenage children announces they're going out. When? Right now, mum.
So my vision of pottering around, cup of tea in hand, while I plan the next horticultural project has somewhat evaporated. Not only that, but the bathroom project has hit a few snags. I was hoping we could tile over the existing tiles, but now the old sanitaryware has been removed, I've discovered that the existing tiles were glued to the previous tiles. ALL the tiles have got to come off, which will not only delay things, but also increase the cost.
Thanks to new stringent rules on electrics in bathrooms, I also have to have new lighting installed. As the ceiling looks a bit dodgy, the builder is recommending putting in a false ceiling. It makes a lot of sense, but it's yet more expense.
Still, the good news is that I've discovered what was causing the massive damp patch on the kitchen wall below (crack in the shower tiles), and why water poured through the kitchen ceiling every time someone had a bath (leaking overflow). This, just in case you wondered, is why I'm having the bathroom redone. Plus the loo leaked. And the radiator didn't work. Apart from that, it was just fine.
Anyway, I finally got out into the garden this evening, just as dusk was falling. I love that time of the day. The garden looked so magical, I forgot to feel guilty about having garden lighting. It's not exactly environmentally friendly, but at least it's not on all the time.
Trying to photograph the garden in evening light and at dawn is a challenge with a digital point-and-shoot. One day, when I've finished paying for the bathroom (which will be in 20 years' time, at this rate) I shall invest in a digital SLR and go on a photography course at West Dean.
We inherited the lighting system with the house, but it didn't work very well. So we got a firm who specialise in garden lighting to come in and fix it. They made some excellent suggestions, such as having uplighters in the lawn rather than spotlight spikes in the borders. These highlight the architectural plants, such as the big phormiums and cordylines.
Last week, they came round to extend the system, so that I had two more sockets in the garden. Instead of running the pond pump cables all the way round the garden to the old socket, the pumps now have their own dedicated socket. And I can use them to plug in the mower without hacking my way through the undergrowth. That reminds me, I must mow the lawn. 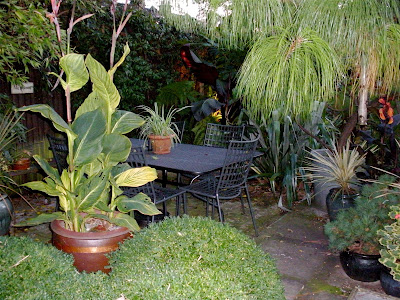 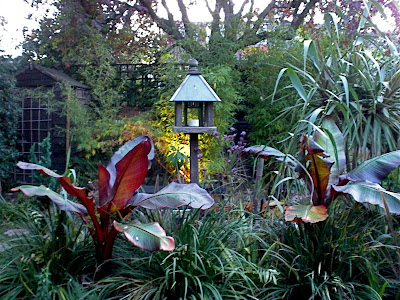 Posted by Victoria Summerley at 7:37 AM