Marrakech: a day in the mountains 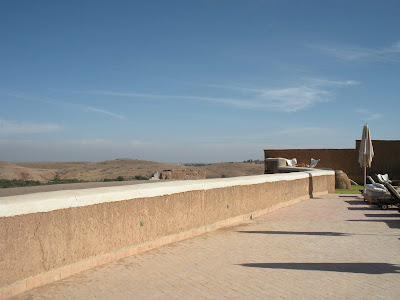 Monday was our last day in Morocco and it dawned wet and chilly. This was just as well otherwise it would have been much more difficult to tear ourselves away from what had been the sun-soaked pool terrace at Tigmi.
We'd booked a tour to the Ourika valley, where the Ourika river carves its way between ever-higher mountains. They culminate in Jebel Toubkal (Mount Toubkal), the highest peak in the Atlas mountains - indeed, in North Africa.
As we drove south up into the foothills, into the Toubkal National Park, the dun-coloured, sparse fields became greener and lusher. Eventually, the towns and villages gave way to a kind of strip of settlements alongside the river, connected to the main road by the most rickety footbridges I have ever seen in my life, slung about 10 feet above the water. The locals stride across them without a care, of course, but there was no way I was crossing one. I was delighted and relieved when our taxi driver recommended a cafe on our side of the water. 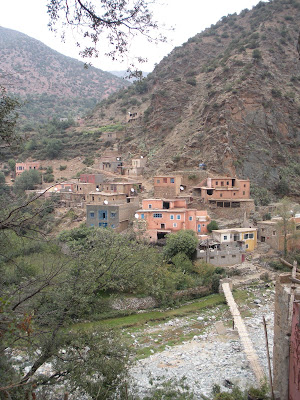 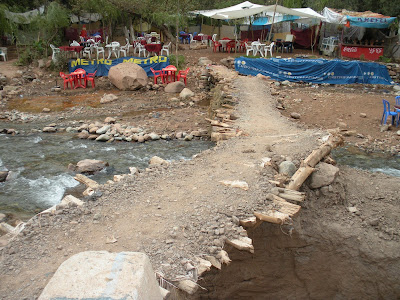 We passed at one point through a Berber market, a crush of donkeys, cars, trucks, people, mopeds and bicycles. We were amused by the "car parks", where donkeys were tethered while their owner shopped or got on with business. Donkeys are a favourite mode of transport, possibly because they never seem to complain when they are completely overloaded ... 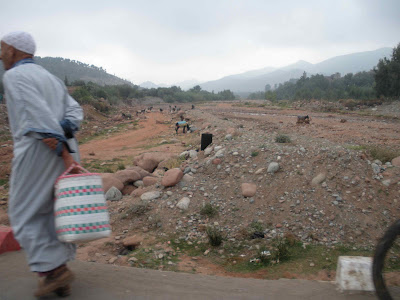 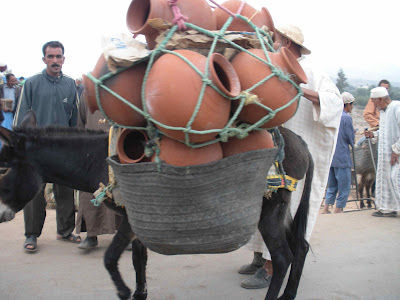 In some areas of Morocco you have to be a bit careful about taking pictures - especially of women, but sometimes even of men. Our driver told us it would be all right to take photographs in the market, but the two little girls below look a bit uncertain. I wanted to explain to them that I was actually trying to photograph the enormous wicker bee skeps behind them and they were accidentally in the shot. 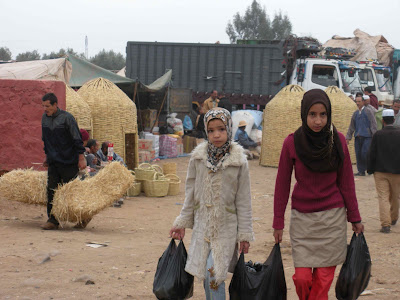 When you walk around Marrakech you see lots of teenage girls dressed in western clothes, riding mopeds, chatting on their cellphones, enjoying a night out. It's easy to forget that for women in rural Morocco, life is very different. According to our driver, arranged marriages are the norm and the women spend very little time outside the home. They are dependent on their husbands not only for food and shelter but also for family news.
Here is a Berber home, shown for the benefit of tourists, but fairly typical. There is running water in the kitchen, provided by a mountain stream which has been diverted via a series of culverts to not only serve the household but also run the mill. 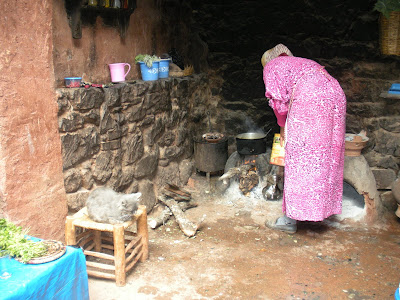 Here is the family silver - literally. It's not used every day, of course, but kept polished and brought out on special occasions, such as weddings or festivals. 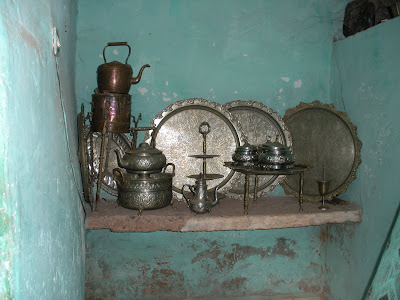 And here's the vegetable patch. There are no flowers in the garden, only fruit trees, and behind the vegetables (tomatoes, courgettes and squashes) there is a patch of maize. 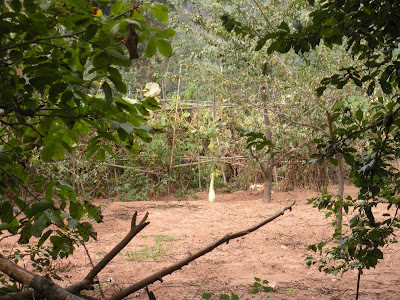 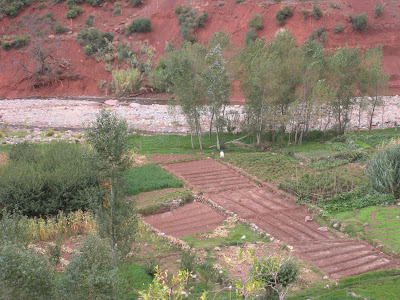 Some more Berber "allotments". The mountains are so steep that any pasture or cultivation tends to be done down by the river, or, where possible, in terraces. If you look at the picture below, it's easy to assume that the buildings in the foreground are a village. In fact the "real" village is up on the mountain, towards the top left of the picture. (There's a close-up version of it below.)
High on the mountainside it is both easy to defend and safe from floods and landslides. However, to save the hassle of going up and down the mountain every time you want something, the stables, grain stores and other agricultural buildings are at river level. 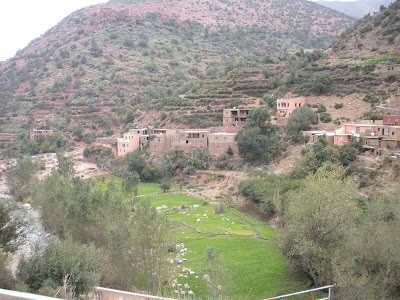 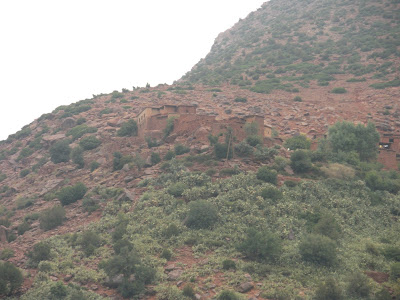 Posted by Victoria Summerley at 12:16 AM