Touch of manner, hint of mood;

With the yellow and the purple and the crimson keeping time.

The scarlet of the maples can shake me like a cry

Of bugles going by.

And my lonely spirit thrills

To see the frosty asters like a smoke upon the hills.

There is something in October sets the gypsy blood astir;

When from every hill of flame

She calls and calls each vagabond by name. 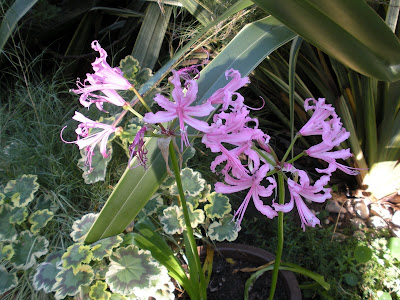 I love this poem. I came across it in an anthology of American poetry in a bookshop in Vermont (can't remember exactly where, but it may have been Middlebury, VT). Maybe it's because my birthday is in October, but it seems to sum up everything I feel about autumn.
This has been a strange autumn in the UK. It's still very mild here in London - it's now been officially termed an Indian summer. So although there are loads of berries on the trees, and pretty good autumn colour, I'm wandering round in short-sleeved T-shirts and wondering if I'll ever get the chance to wear my cut-price cashmere cardigan.
One plant that always strikes me as a strangely out of place at this time of year - although this is its flowering season - is Nerine bowdenii (above). I've grown them for the first time after being given some plants by a member of my gardening group.
They look not only impossibly glamorous with their girlie-pink flowers, but also quite un-autumnal. They're supposed to be quite tender, but I know of one front garden near me where they come up reliably year after year. I know they like to bask in a sunny spot, especially if it is backed by a wall, but mine seem to have thrived on neglect. I potted them up when I was given them, and haven't done anything to them since, apart from shove them under a phormium. In fact, I had two lots, but gave some to Rob, so it will be interesting to hear how his have done.
The nerines are not the only thing in bloom in the garden at the moment. The tetrapanax flowers at this time of the year, producing a strange spray like blobby antlers. 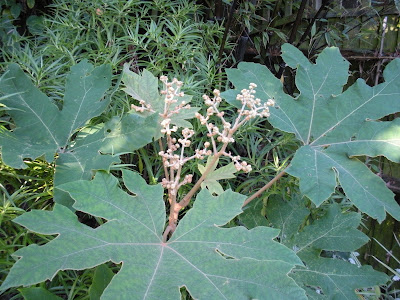 The miscanthus flowers make the best of the low autumn light, while the barred foliage looks sun-dappled whether it rains or shines. 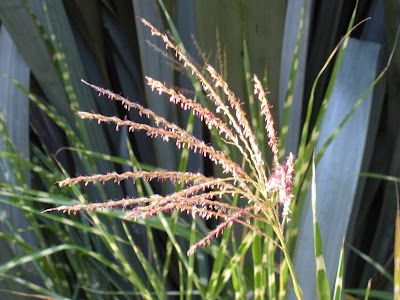 I have also been converted to Geranium 'Rozanne'. I wasn't a huge fan when I first had it - the leaves seemed a bit coarse and the flowers didn't really do much for me. I was thinking of ripping it out, but I reckon it's earned its place this year, flowering non-stop and undeterred by the ash leaves falling all over it. It really seems to like being chopped back - which I have done every time it started to look a bit scruffy. I'm impressed. 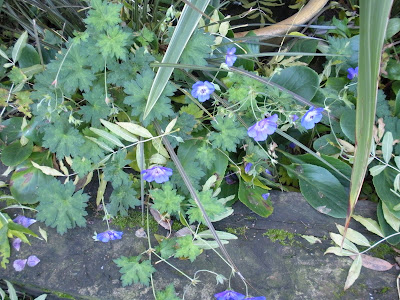 So, it's nearly November and I'm still wearing summer T-shirts and enjoying my flowers. To cap it all, I bought my first narcissi today; a bunch of paperwhites with an incredible perfume. Perhaps this is what they mean by a garden for all seasons.
Posted by Victoria Summerley at 12:10 AM