A spooky story for Halloween 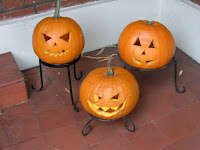 Halloween is quite a big deal where we live in London. It's not as popular a festival as it is in the States, but lots of people have parties, and decorate their houses, and go trick or treating - more and more each year, in fact.
There are some grouchy people who see this as evidence of the Americanisation of British culture, but personally I love the idea of making days special and having fun. What's not to like?
This year we thought we'd get into the ghostly spirit of things and put out pumpkins on the porch and some fairy lights. We also invested in lots of treats for the kids who live locally, and a special pumpkin shaped bag to put them in. (I am such a pushover...)
My family all claim to have had supernatural experiences, but I never have - which is just as well, because I would, like, totally freak (as my daughter would say). The idea absolutely terrifies me. The closest I ever came to a spectral encounter was in my last house, a few years ago ...
It was a nice house, terraced, red-brick, and built in around 1919 (I reckon). Most of the original features were missing when we moved in, so we proceeded to install things like a traditional stained glass door, proper wooden French windows, and a fireplace in the living room.
Shortly after we embarked on this restoration project, our nanny Elaine bumped into a lady in the street and they got chatting. The lady had lived in our street long ago, and was visiting friends in the neighbourhood. She told Elaine that during the Blitz, there had been a direct hit on our house. The house itself had been rebuilt from the ground up (which explained the lack of original features). But tragically, two people had been killed while sheltering in the cellar.
As you can imagine, I really, really wanted to know this. Cellars in old houses are fairly spooky places, reminding one forcibly of Edgar Allan Poe stories. Our cellar was no exception - and even worse, the door at the top of the stairs to the cellar, which was in the hallway, had a habit of creaking open unexpectedly.
This was because there had been a special chute at the front of the house, under the front step, where the coalman delivered the coal. If the wind was in the right direction, the draught from this would blow the door open. Knowing this didn't really make it any less spooky.
My husband had an old flat iron, which I think had been his grandmother's, so we decided to use that as a doorstop. I didn't say anything to my husband, but I liked the idea that iron was an old charm against sorcery, witchcraft and any other supernatural activity.
Despite the flat iron doorstop, however, the door was often found to be ajar. We used to keep things like the vacuum cleaner and so on in the cellar, so it was perfectly possible that someone hadn't closed the door properly after getting out the ironing board or some such. But it was strange ...
One night, the kids had gone to bed and I was on my own downstairs. I settled down to watch television, and went to shut the living room door. I could see the cellar door was ajar - again - so I propped the flat iron firmly against it.
To my horror, the door immediately began to push against the flat iron of its own accord. Very gently, a fraction of an inch at a time. I was rooted to the spot with fright. The door kept opening, agonisingly slowly, until at last, when it was a couple of inches ajar ... a furry paw came round the door.
It was the cat. Apparently, she could climb into the cellar through the coal hole, but not out again, so she would push against the door instead.
Happy Halloween! 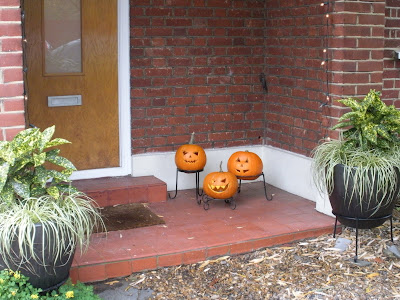 Posted by Victoria Summerley at 12:36 PM