Revenge of the Yellow Book

Anne Wareham tells me that her garden, Veddw, has been dropped from the National Garden Scheme's Yellow Book next year, apparently as a punishment for the piece she wrote in the Spectator earlier this year.


She say the Chief Executive of the NGS, George Plumptre, told her: "I don't think you have any concept how many hundreds of humble, innocent garden owners and NGS volunteers were deeply hurt by your diatribe in The Spectator earlier this year."
Anne has a reputation for being controversial; some would say abrasive. That's what she does; in the cosy world that is British horticulture, she is the grit that helps create the pearl in the oyster. Perhaps a better analogy would be to compare her to the stone in your shoe that stops you in your tracks and makes you question your preconceptions.
The NGS, on the other hand, is a charity. It has no business being controversial, abrasive or - apparently - vengeful. I don't know George Plumptre very well, but he has always seemed to me to be a sensible sort of chap, so I very much hope that this is a misunderstanding.
Personally, I don't always agree with Anne's views. We differ greatly on the subject of lawn edging, for example. However, I think she has very interesting things to say about garden design, and about the way we appreciate gardens.
I went to a lecture by Sir Roy Strong during the Olympics, and he was talking about how the British inhabit a landscape of the imagination - a make-believe world which has more to do with sentiment and nostalgia than it has to do with reality.
He cited The Haywain (below) by John Constable - one of the most famous paintings in the world - and pointed out that Constable didn't paint it from life, but in his London studio. Not only that, he painted the scene as he remembered it from his childhood. 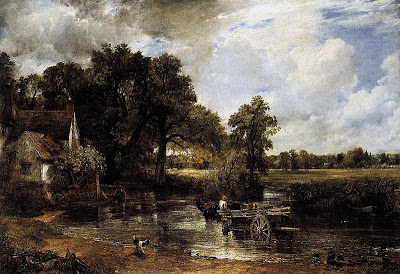 We British have a very irritating tendency to look back, like Lot's wife, or Orpheus (and remember what happened to them!), at past glories. Gardeners are always trying to recreate a Sissinghurst or a Hidcote, and public taste applauds and colludes.
I'm not at all convinced that it is healthy to wallow in les temps perdu. Tempting, yes, but ultimately unexciting and uncreative. At least let's not get cross when someone tries to prod us out of our Edwardian daydream.
Posted by Victoria Summerley at 11:02 PM