Saturday 14 July dawned hot and sunny - just the sort of weather you want when you have to spend most of the day in the coach... There were lots of wistful backward glances as we left Lake Bled, nestled amid misty mountains, but huge excitement at the prospect of our next stop. Venice. The Queen of the Adriatic, the City of Light.
The journey took about four hours, with a quick stop for water and loos, and by late lunchtime we had arrived at what must be one of the most charismatic cities in the world. No traffic is permitted in Venice, so your first impression is of an enormous car park, situated across the lagoon from a oil refinery. Lovely.
Don't let it put you off, though, because once you're on the boat, heading for the Piazza San Marco, it's impossible not to fall under the Venetian spell.
George Bernard Shaw once said that youth is wasted on the young. I suspect he might have agreed that travel is also more rewarding when you are older. I hadn't visited Venice since I was a teenager, when I spent most of the time trailing round freezing cold churches looking at Tintorettos, and the rest of the time shivering in a cheap hotel with stone floors (we were there in early April). Far too little time, in my opinion, was spent lurking in coffee bars, warming my frozen fingers on a cappucino.
We went in spring, because there is a general belief that Venice in high summer is unbearable, with smelly canals and squillions of tourists. And in winter, the city is often flooded, so all in all, the opportunities to visit seem limited.
We arrived in the middle of the Redentore festival, which meant that the city was busier than ever. It was a bit of a nightmare trying to herd 42 children of varying ages through the crowds, but despite the tourists and the heat, it was fabulous.
We stopped at the Piazza San Marco, in front of the cathedral, to make a note of our meeting place and then we dispersed into the alleyways around the square before meeting up again to eat.
If you've never been to the city before, do not be tempted to hang around in the open in the piazza. It's quite safe, but there is very little shelter from the sun. In any other city, one might be a bit wary of diving into dark narrow passageways surrounding the main square, but in Venice these are where you will find the nicer shops, the quieter canals and perhaps even a peaceful piazza.
It's impossible to get lost, because there are yellow signs on the street corners giving you directions to the major landmarks: "Rialto" (for the Rialto Bridge) or "San Marco".
Venice is unique. It even has its own brand of tourist tat: the shops are laden with carnevale masks, Murano glass and gondoliers' hats. I wanted a Murano glass bracelet and Kitty wanted a cup of coffee, so we wandered over to the Rialto and found a cafe. The cafe prices are eye-watering - but then so is the view.
We were due to sing at Mass at St Mark's at 6.45pm, but we still managed to have a coffee, buy a handbag or two, and some gloves. On a previous visit, Kitty had found a glove shop where they could tell your size just by looking at your hand. Amazingly, we found it on our way back to the cathedral.
Kitty bought a plain black pair, but I splashed out on a dark brown pair trimmed with a strap in Hermes orange. I then found a bright orange leather handbag for 60 euros. We had a fantastic time.
We weren't allowed to take photographs inside St Mark's. Indeed, we weren't allowed to do anything other than sing at Mass - we were ushered into the building just beforehand and out again at the end. But it was a wonderful feeling - even if the deacon did glare at us all the way through. 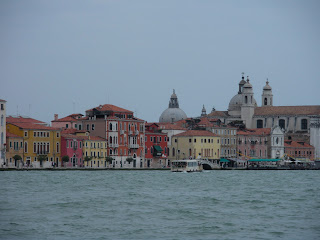 It's very exciting when the smudgy skyline you can see across the lagoon starts to take shape as you approach Venice by boat. Little by little, the rainbow colours of the houses, and the domes and spires of churches come into focus as you speed across the water. 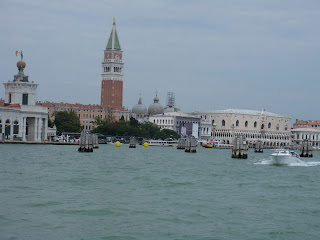 The unmistakable outline of the Campanile (the bell tower) and the Doge's palace, which looks like a beautiful Oriental jewellery box. The Doge was the ruler of Venice, but not in any royal sense. He was elected, and strict rules were in place to ensure that powerful men did not turn the position into something that they could pass on to their sons. 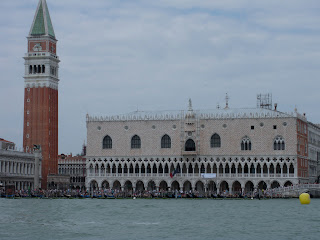 Look at the ant-like procession of people on the quayside. You can see how busy it is. 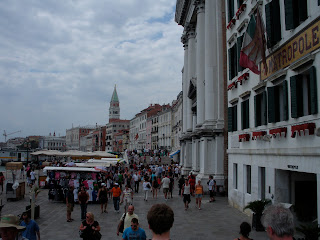 Before you've gone more than a couple of yards in Venice, history steps forward to greet you. The church on the right, with the big columns, is known as the Vivaldi church, because it was here that Antonio Vivaldi taught at the Ospedale della Pieta, a combination of convent, orphanage and music school. It was a girls' orphanage, and the girls had to sing the tenor and bass parts as well as the alto and soprano lines. The present building was completed after Vivaldi's death, but the Metropole Hotel, on the right, stands on the site of the original. 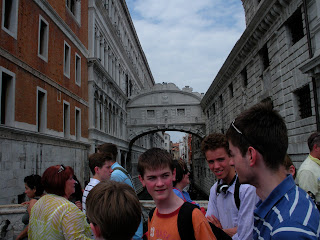 Here is the Bridge of Sighs, which connects the Doge's Palace with the New Prison. It was named by Lord Byron, who romantically imagined prisoners taking their last view of Venice through the windows before execution. Apparently this is poetic tosh - the New Prison was full of Venetian ne'er-do-wells and pickpockets, not tragic victims of oppression. 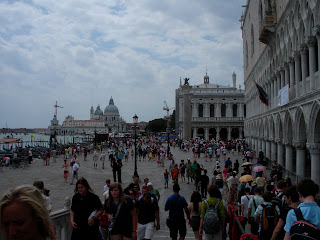 As we approached the Piazza San Marco (St Mark's Square) the crowds seemed to get thicker. As we turned the corner, and got our first glimpse of the cathedral, it was only possible to take quick snaps before someone bumped into you, or got in the way. 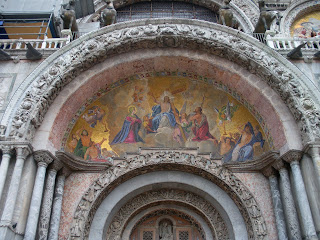 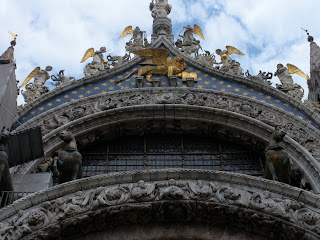 Here's the winged lion, the symbol of Venice and of St Mark the Evangelist. 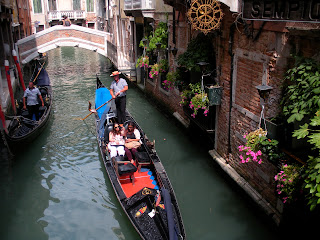 Here's another symbol of Venice - the gondola, with its attendant gondolier in his traditional straw hat. 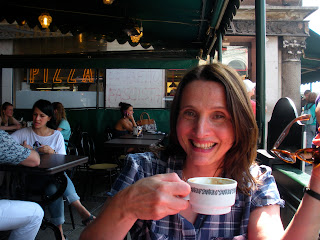 Here's Kitty - never happier than when she has a cup of coffee in her hand! 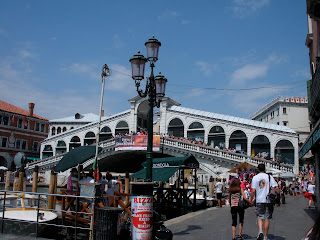 And here's the Rialto, traditionally the centre of commerce in Venice and even now a busy shopping centre. There are tourist stalls galore, but if you step off the main alley you'll find yourself in a market place, with Venetian buying their groceries. 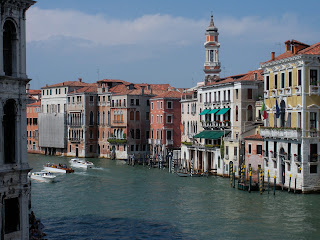 The view from the Rialto. Isn't it beautiful? Venice really is one of those cities that looks just as good in real life as it does in the brochure.


Posted by Victoria Summerley at 8:45 PM