"Hey, the garden is going to be on Gardeners' World!" This piece of news failed spectacularly to excite my son and daughter, who were packing for the start of the university term, and more interested in whether they'd remembered to buy teabags than in my horticultural hooplas.
“You gonna be on it, Mum?” asked my son, barely lifting his eyes from a tangle of cables, clean socks and phone chargers.

“No, just the garden,” I said. “…K,” he mumbled, visibly losing interest.
No one is interested in you – as a person, I mean – if you are showing off your garden. People want to know about the plants, and how you grow things. You could be a scarecrow for all they care (although if you were a particularly efficacious scarecrow, capable of clearing entire allotments of pigeons and other thieving avians, they'd be very interested indeed). Gardening is very good for keeping one's ego firmly in its place.
I'd been rung up by BBC Gardeners' World before, a couple of years ago, but nothing came of it. A couple of times, photographers have contacted me, but then decided my garden – a subtropical jungle in South-west London, full of bamboos and hardy bananas – wasn't suitable for their purposes. Oh well, another blow to my self-esteem.
This time however, the GW advance party came round, they enthused about the garden, and they said they'd ring me. Yeah, right, I thought. To my astonishment, they rang a few days later and said they'd love to come and film. So at sunrise one day last week, I found myself mowing the lawn, sweeping the terrace and fishing dead leaves out of the pond. At 9.30am, the crew arrived, along with presenter Joe Swift (below). I set about making copious amounts of tea. 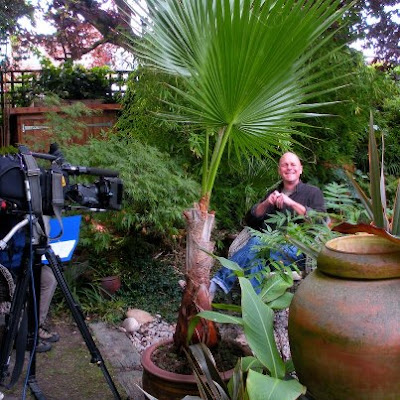 I open my garden for charity under the National Gardens Scheme, so I'm used to seeing strangers in it. I love watching how they react to it – where they sit, what they look at, how they use the space that I have created. With a film crew it was even more fascinating. I kept wanting to say things like: “The sun hits that bit of the garden in about an hour,” but I didn't dare. What with all the mowing, and sweeping, and tea-making, I felt a bit like I was on work experience.
The idea of the segment they were filming, apparently, was to show how to achieve layers of planting in the garden, so there is a seamless transition between low-growing plants and gigantic ones. So, was my garden an example of how to do it, or how not to do it? I'll have to wait until it airs to find out. After all, I'm only the gardener.

I've been trying to find the time to blog about this for ages, without success. So do please forgive me for recycling this piece, which appeared in the i newspaper last week. As soon as I know when the programme is going out, I'll let you know.

Posted by Victoria Summerley at 8:50 PM