I had a rather novel experience yesterday evening - I went to an RHS show and found I was one of the oldest people there. It was the RHS London Harvest Festival Show, and for the first time ever, the show was open until 9pm.
Now, this was good in itself. I can rarely get to the London RHS shows because they are held during the week, during the day. I have to take a day off, or slope into work a bit later. The idea of being able to go to a show on the way home, instead of lugging my purchases onto the Tube and into the office, is brilliant.
Not only that, there was a cocktail bar. Yes, a cocktail bar! It was Lottie Muir's Midnight Apothecary bar, which Lottie, aka the Cocktail Gardener, started at the Brunel Museum in Rotherhithe, and which has already become an institution. 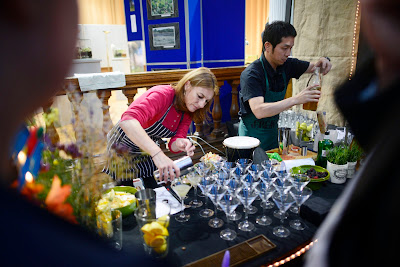 There was a huge queue for cocktails, with hardly a person over 30 to be seen. Being a cynical hack, I suspected that the RHS had drafted in some of their younger members of staff to swell the crowds. However, this was not the case: the two women behind me said they'd read about the event in Time Out, while the women in front of me had seen it advertised on an events listings website. 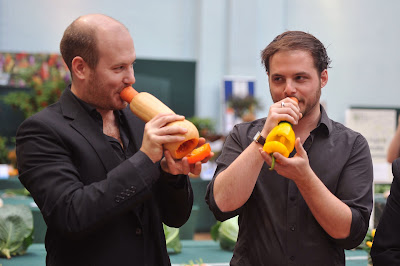 While waiting in the queue for our cocktails, we were entertained by the London Vegetable Orchestra. I'd seen them at Hampton Court a couple of years ago, but had never heard their full repertoire.
It wasn't all cocktails and courgette clarinets. There was the usual Fruit and Vegetable Competition, with specimens of quite extraordinary size and length laid out on the tables. Wesley Kerr pointed out to me the rivalry between the Duke of Marlborough (known as "Sunny") and the Duke of Devonshire (whose prep school nickname was Stoker), who compete every year to see who can win first prize for their grapes. I love the idea of "Sunny" and "Stoker" jostling for first prize with their bunches of muscats. Talk about pistils at dawn.
There was food too: cheese, from Godsells in Gloucestershire (whose cheeses include The Three Virgins and Singing Granny); mushrooms and sausages, plus apples from the Wisley orchards.
Anyway, if the RHS is still concerned about ways to encourage the under-30s into gardening,  I reckon they can stop worrying. All it takes, apparently, is a few cocktails and a group of men fingering weirdly shaped vegetables.

Posted by Victoria Summerley at 2:15 PM