When I opened my garden on Sunday 28 August, among the visitors were Clive and Steven, who were opening their own garden for the National Gardens Scheme for the first time this Sunday, 4 September.
I'd seen Clive's blog so I knew his garden was sub-tropical - far more so than mine. If that wasn't enough to entice me over to Camberwell, in south-east London, I felt the least I could do was to go and support two new boys! Even after five years of opening, I still know that feeling of terror mixed with excitement...
Clive and Steven put me to shame. I only remembered to put up a poster outside my house on the morning of the opening. They had fliers on the trees in the street - thank goodness, because although I'd taken a note of the postcode, for the sat-nav, I'd forgotten to take a note of the house number!
If you didn't know, you'd never have guessed they were opening for the first time. The atmosphere seemed completely relaxed and welcoming, from the friendly person taking the money (Steven's father, I think) to the tea and cake area. Clive and Steven were both chatting away to the visitors as if we were old friends, which was lovely. I do like it when owners are friendly.
The garden is quite exciting, because it's an L-shape, consisting of the usual back garden, plus a bit of land to the right, which runs behind the neighbouring houses. There's a pond at the end of the original garden, and a greenhouse in which Clive grows carnivorous plants.
The new bit has given Clive a blank canvas (if you can call nettles a blank canvas) on which to create a vegetable garden cheek by jowl with borders filled with dahlias, crocosmia, sunflowers and tithonia, which glowed in the late afternoon sun.
Did I say sun? Well, it was sunny when I was there, which was about 4.30pm, but they'd had exactly the same experience as me the week before. Just before they opened the garden, the heavens decided to open too. It's so demoralising when that happens, so I'm delighted to hear that they eventually got 130 visitors. 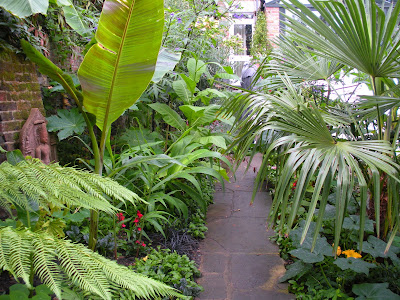 You enter the garden by pushing your way through a tropical fantasy of tree ferns and palms and bananas, before you emerge on to the broad open lawn. I love this approach - some people find it claustrophobic, but I like the sense of going on an adventure and not knowing what you're going to see. 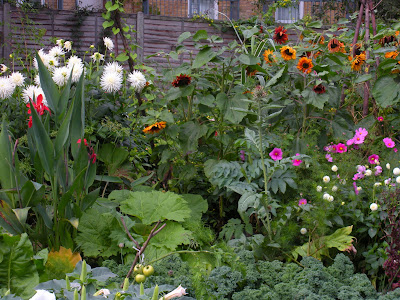 The white dahlias on the left are 'Klondike' and the sunflowers are 'Earthwalker'. Clive said he was a bit disappointed with them because the heads drooped but I thought the colours were gorgeous. 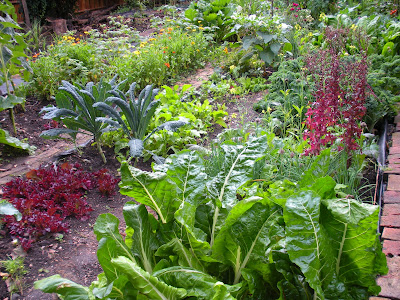 The vibrant reds and oranges of the dahlias were reflected in the vegetable garden, where marigolds jostled with kale and lettuce. And even Mina lobata, below, which was blazing away in the courgette patch. 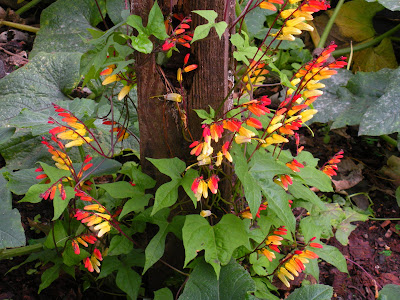 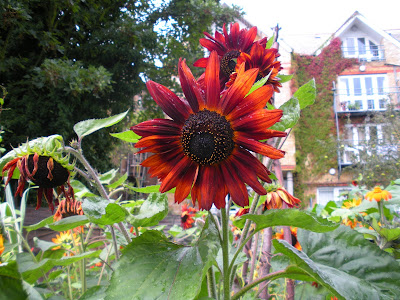 Here's another one of those sumptuous sunflowers. You can see some tithonia on the right, looking as if it's standing on tiptoes to try to be as tall.
It was difficult to tear myself away from Camberwell, but I wanted to go and see the garden belonging to my friend Nigel Buckie, who was opening for the British Red Cross. We used to open on the same day for the NGS, but Nigel had some issues with his bamboo so didn't open for a year or so while he sorted it out. 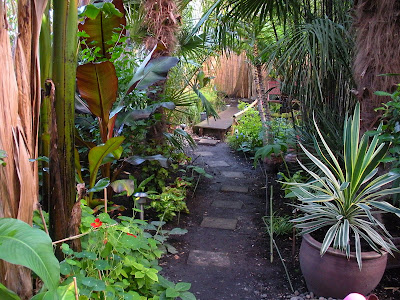 The end result is an improvement, I think - there is more contrast between textures, and whereas before Nigel had a rill, which was like a straight, shallow canal, he now has a proper pond with koi in it. There's a bridge over the pond too, with a bamboo pole, and the sound of the fountain gushing into the deep water blocks out the usual south London noises (traffic, sirens, neighbours etc). 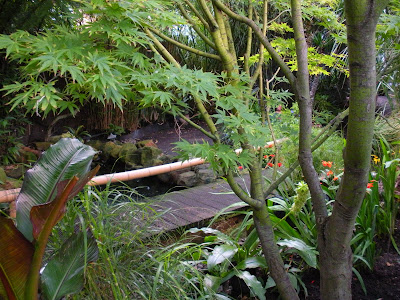 He's also built himself a tiki bar out of bits of bamboo at the end of the garden. It was all set up for cocktails, but it was getting rather chilly, so I settled for one of Nigel's scones and a cup of tea. 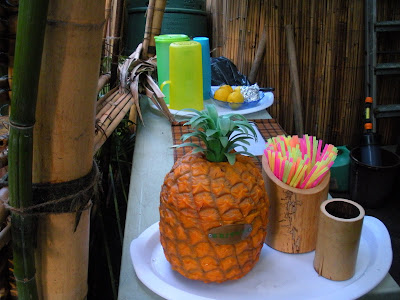 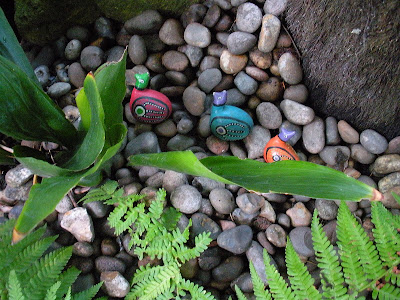 I loved these little birds, which looked as if they were about to run off through the undergrowth. Apparently someone who came to visit the garden just left them there.
Of course, the garden I would have loved to see on Sunday was my friend Karen's garden.
She was opening for the NGS for the first time too, in north-west Wales.
I'm sorry, Karen - I had to steel myself to face the South Circular on a Sunday afternoon, let alone north-west Wales. But I'll make it one day!
Posted by Victoria Summerley at 11:27 PM