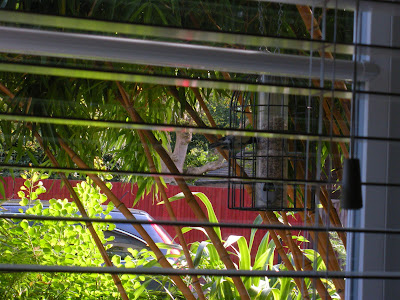 A great tit on the feeder outside my study window
The concept of a garden as an "outdoor living space" has a lot to answer for. At the weekend, I was talking to someone who complained that all the birds seemed to have abandoned their garden.
The garden used to be full of birds, they said, but now - despite putting out bird feeders and suet balls and so on - there was not so much as a chirp. Did I think this was the result of global warming, or some sort of bird epidemic?
Further enquiry elicited the information that they had lived in their garden flat for about 18 months. The first year had been spent doing up the flat and it was only this summer that they got around to tidying up the garden.
Yup, you've guessed it. They have ripped out all the "messy" ivy and removed all the overgrown shrubs. Their garden is now an "outdoor living space", complete with painted fence, paving, and a few plants in containers.
Colleagues or friends of friends tell me stories like this quite often. One couple I know cut down the conifers in front of their house because they thought it would give them more light. (The conifers weren't Leylandii, and they weren't that close to the house.) Then they wondered why the "cute little birds" (a colony of goldcrests) had disappeared.
Because you've cut down the trees, I said. But we've put out a bird feeder, they said, and we've got an apple tree in a pot...
The stories are always the same, and the question is always the same. "Is the disappearance of the birds due to climate change?"
I always want to answer (but of course am far too polite to do so): "No, it's the result of Stupid Human Syndrome!"
The irony is that the same people will probably get quite exercised about the disappearance of the rainforests or the pollution engendered by the attempts of countries like China and India to make a decent living for themselves. They just can't make the connection between habitat loss and their own backyards.
This is depressing, because it seems as if I have read thousands of articles about how our gardens provide a vital refuge for songbirds. The RHS and the RSPB do a fantastic job in trying to educate the public about gardening for wildlife.
The trouble is, most of the time they are preaching to the converted. What we need is a really hard-hitting campaign that has a far greater popular impact. If only Pixar would make a film about a group of garden birds coping with a shrinking habitat (Bird Story) or Disney would come up with a plot involving birds in an alien environment (BIRD-E).
In the meantime, I shall go on patiently telling people that birds like cover, and that it doesn't matter how attractive your garden furniture is, or how much your paving cost, they won't come down to a feeder if there is not a single shrub or tree in the vicinity.
Posted by Victoria Summerley at 9:58 AM