Now we are two - sometimes

I was so busy getting ready for the garden opening, and then so busy getting over the garden opening that I haven't had time until now to tell you about our new arrival. On Monday morning, my daughter and I set off to collect Mario.
He was supposed to arrive with Luigi, but broke his leg, so he's been staying with the breeder, Karel, until he was given the all-clear by the vet. He's now fully recovered, with only a patch of shorn fur to show for his injury, and that's growing back fast.
Mario is a very glamorous little chap, because he is a chocolate Abyssinian, and these are still quite unusual. The darker fur, on his head, back and tail, is a kind of milk chocolate colour, but the overall effect is a sort of toffee shade. 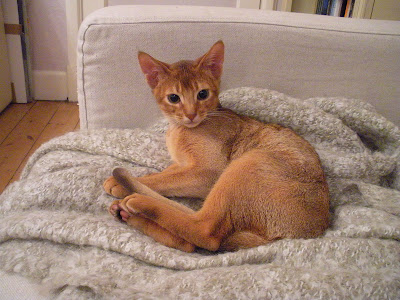 I was a bit apprehensive about what would happen when the two cats met. There was no way they would remember each other after six weeks, and while Luigi had settled into our household very happily, Mario was older and bigger and had yet to get to know us. Would they fight?
Well, the answer is yes. And no. For the first few days we kept Mario shut in the study with his own litter tray and food. This was to allow him to get to know us, and feel secure about his surroundings before venturing out into the rest of the house - or encountering Luigi.
Luigi was intrigued by the new arrival, but also rather miffed. He would scratch at the study door occasionally, and on the few occasions he managed to slip inside, he made Mario's life a misery by chasing him round the room and jumping on him.
However, while the two had these wrestling matches, I didn't notice any hissing, or ears going back, or yowls of pain, so I was hopeful. Neither of them seemed to suffer any injury. (We, meanwhile, are covered with scratches from where "affectionate" cats have leapt onto our laps or shoulders.) The chasing and the ambushing were a strange, silent ritual, in which Mario (the bigger cat) always gave way to the pestiferous Luigi. 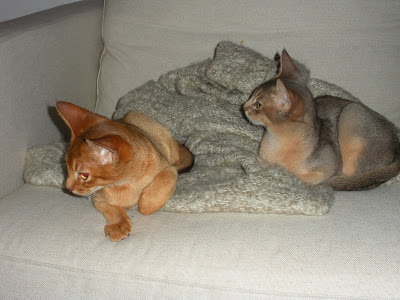 I found this article on the internet, to which we clung in the same way that new parents cling to the works of Miriam Stoppard or Gina Ford. Every paw-thrust or pause in the hostilities sent me rushing to the computer to see whether I should be embarking on the Next Stage.
In the end, we let Mario out of the study this morning. Luigi chased him round and round the living room again and again. And again. We got very bored with it. And eventually, SO DID THEY!
By the time I had to shut them both (erk!) in the study while my daughter threw a surprise birthday party for her best friend, they were well on the way to a truce. 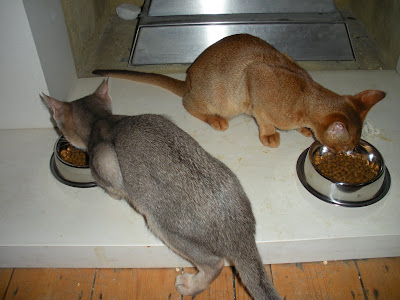 After a tasty supper of incredibly expensive cat food, it was time to settle down for the night. 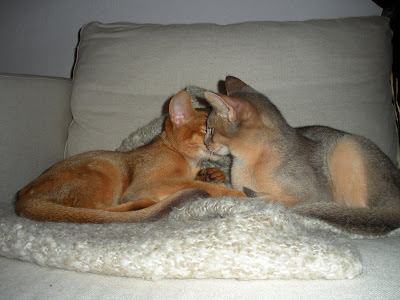 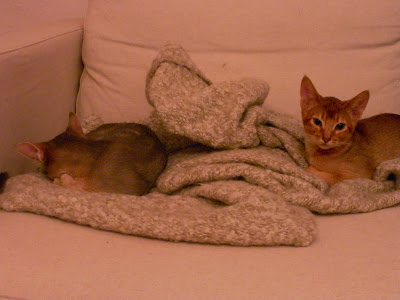 A last goodnight miaow for me... 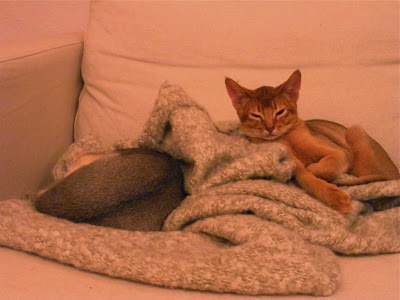 And it was off to sleep. Shhhhh!
Posted by Victoria Summerley at 8:03 PM