Ring-necked parakeets are an increasingly common sight in London. They first bred in the wild in the 1970s, in Esher, Surrey, but since then have spread north as far as Wimbledon and Wandsworth. You can see them (or probably hear them screeching first) if you visit Kew Gardens, or Syon Park, or Hampton Court, and apparently they can now be found as far as Yorkshire and Essex.
There is a legend that the first birds were released into the wild by Jimi Hendrix. Sadly, as far as I can ascertain, there is absolutely no truth in it. It's a lovely idea, though: kerrang!
Like most escapees, the parakeets are a bit of a nuisance. They compete with woodpeckers for nesting holes, and they can be noisy - they roost in flocks, like starlings. You can read what the Royal Society for the Protection of Birds thinks about their impact on the environment here.
However, they are also incredibly gorgeous. It still gives me a thrill to see them flashing across the garden, with their vivid green plumage and turquoise tails.
They've been visiting our bird feeders for the first time this year, possibly because of the cold winter - although according to the RSPB, they are often seen in London gardens. Even my daughter, who at 15 is usually too cool to react to anything, displayed a minuscule tremor of excitement when she spotted one.
The parakeets are quite shy and will scarper the minute they catch sight of a potential predator, which includes me and especially Pushkin who likes to lie doggo (or should that be catto?) under the phormium in the hope of catching birdlife unawares. 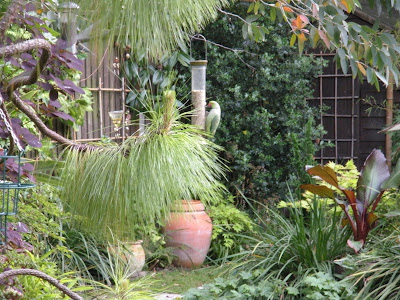 Excuse the blurry photos. I was trying to sneak a bit closer. There were two originally, like bookends, but one flew away. 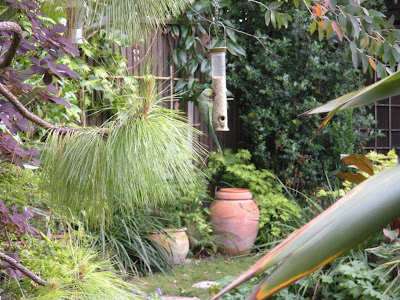 He's really getting his beak stuck in there, isn't he? Greedy thing. 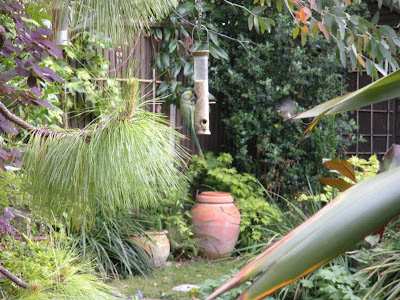 The blur on the right (click on the picture to get a better view) is a poor little great tit, who is desperately trying to snatch a bite for his supper. Every time he dived for the feeder, the parakeet snapped at him. 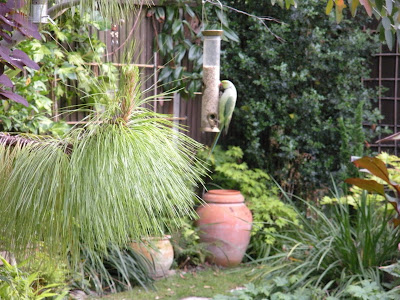 Still scoffing sunflower seeds. I couldn't get them in the picture, but underneath the feeder are a couple of woodpigeons, voraciously vaccuuming up any crumbs from the feast. 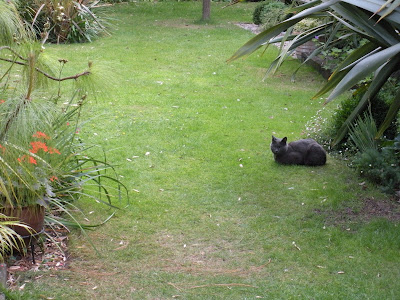 Here's Pushkin putting on his best sinister expression. You can almost hear him saying: "We've been expecting you, Mr Bond ..." (Look at the state of that grass. You can see how dry it has been in London.)
While we're on the subject of exotic things with beak-like protuberances, has anyone noticed that it seems to be a bumper year for phormium flowers? I've got loads - not just one or two spikes, as in previous years, but at least half a dozen per plant. They're strange-looking things: more like claws or beaks than flowers. The birds seem to like them though. Later in the summer we'll see blue tits eating the seeds. I like this. It's nice to see foreign imports making themselves at home and doing their bit for the community. 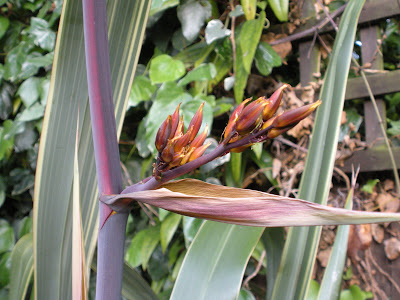 My attempt at a close-up of one of the flowers. They open up to reveal big black seeds. 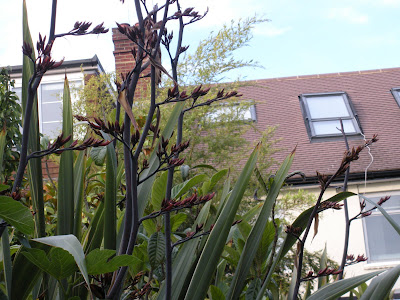 Posted by Victoria Summerley at 7:32 PM