Trees in the breeze

Despite the fact that I live in London, I've always lived in a house or flat where there are big trees nearby. This is easier than you might think. Sometimes the trees are supposed to be there, like the London planes (Platanus x hispanica) that line so many of the capital's streets.
Quite often they're not supposed to be there, like the self-seeded 50ft sycamore outside my sister's old flat in Camden, and the ash trees along my boundary fence, which, irritatingly, are the subject of conservation orders and cannot be pruned without permission from the council. And very often, they were planted as cute little foot-high things by misguided householders 30 years ago, like the massive Eucalyptus gunnii, or cider gum, in my neighbour's garden.
They say you're never more than a few feet away from a rat in London. I don't know about rodents, but I never seem to be more than a few feet away from a huge eucalyptus. There was one next door in my last house, and the house before that. They are the arboreal equivalent of litter louts, dropping leaves, twigs and bark all over the place, all year round, like those horrible people who chuck McDonalds wrappers out of the car window.
It's easy to forgive them, however (unlike the McDonalds people) because for their size, they are graceful trees, particularly in a breeze. As the wind swooshes through them, they make a kind of rushing noise, like the sea coming in.
Perhaps that's why I always think of galleons when I see trees in the breeze - they seem like ships, with the canopy moving in the wind like bellying sails and the creak of branches like the groan of straining timbers. Since sailing ships were made from trees, I suppose this isn't as fanciful an image as it may sound. Among the trees along the left-hand fence of my garden, there is even an oak, the traditional source of timber for English ships.
One of my favourite stories, when I was a child, was Jason and the Argonauts, who sailed to Colchis on the Black Sea (what is now Georgia) in search of the Golden Fleece. Their boat, the Argo, was said to speak with a human voice. When the writer and historian Tim Severin recreated the journey for his book, The Jason Voyage, he initially put this down to a bit of embroidering on the part of the story-teller.
To recreate a Bronze Age galley, he sought out a traditional Greek shipbuilder, and when the ship was ready to launch, they took it down to the sea. As it was eased onto the rollers that were to carry it across the sand, the wood let out a loud groan, just like a person. Perhaps it was yearning to be back on dry land with the wind in its leaves. 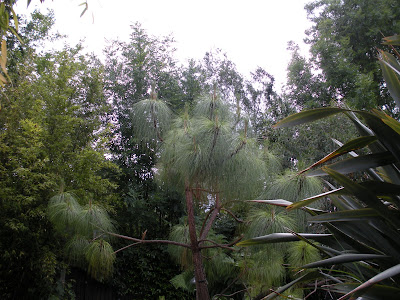 The view from my garden to the south. From left (ignoring the Montezuma pine), bamboo, self-seeded ash (chopped to the ground by my neighbour four years ago), overgrown cherry tree, self-seeded ash and behind that, the huge eucalyptus. Through the phormium leaves to the right of the pine you can see a grey blur, which is my snow gum (Eucalyptus debeuzevillei), a much smaller species.
Posted by Victoria Summerley at 12:13 PM