My mother's garden: a before and after story

You may remember that I went to give my mother a hand with her garden a couple of weeks ago. Well, she's finally come up with the before and after pictures so I thought you might like to see them.
My mother moved to her current house two years ago this month, mainly because it was over the road from my younger sister, and was easier to manage than her previous home, which was much bigger both inside and out.
The new garden was very sunny and had a lovely aspect. Apart from glimpses of neighbours' gardens through a high trellis on either side, it looks onto trees and sky. At the end is a lovely magnolia and the flower beds overflow with roses and alstroemeria. However, the woman who lived there had a son who was a great koi carp enthusiast and the garden was dominated by a large pond.
Not only that, but it seemed as if the garden had been developed piecemeal, without much thought being given to an overall plan. So, there was a bit of decking outside the conservatory - just big enough to get two chairs on by the time you'd opened the doors. There was a small gravelled area. And there was a paved area outside the back door, which then turned into a concrete path down the garden. Stepping stones led through the lawn to a stone urn which sat on a stone plinth and looked rather funereal. (In fact, we nicknamed it the funeral urn.) Here's a picture of how it used to look. 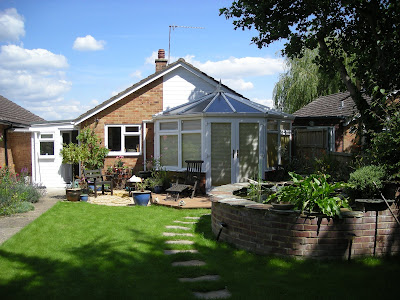 And here's a picture from a different angle. (It doesn't make the pond look any smaller, though.) 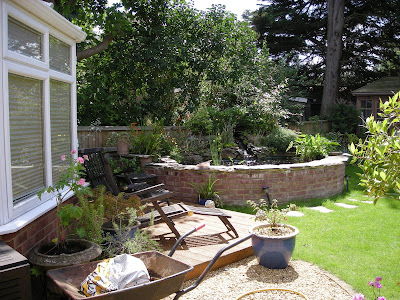 For the first year, despite complaining loudly about the pond, my mother said she just wanted to live with the garden before coming to any great conclusions about it. Fair enough, although my sister and I had already drawn our own conclusions. The pond had to go! Luckily, my brother-in-law is a builder, so before you could say "makeover", he had knocked the thing down. 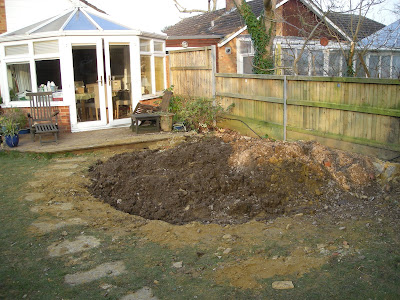 My mother was also having work done inside the house (a new kitchen and bathroom, plus a remodelling of the porch and entrance hall). The old door to the garden was quite narrow and impractical. A new glazed one gave a lovely view of the sunny border as you came in the front door and helped persuade my mother that it would be a good idea to pave right across the back of the house, with a wide step down from the back door and the conservatory door.
During all the remodelling work, the lawn had virtually disappeared beneath a layer of rubble and timber and concrete mixers and so on. My sister decided that all the smart new paving deserved a smart new lawn, so she dug out the scabby old grass and returfed it. 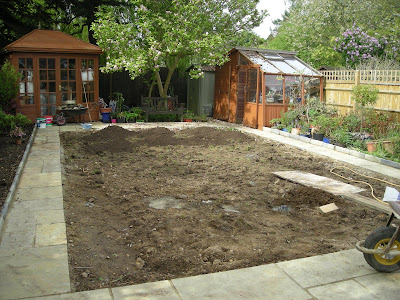 We chose a naturalistic limestone colour for the paving, which looks attractive even in the rain. (If you're choosing paving, try to see it wet as well as dry, as it can darken up considerably.) 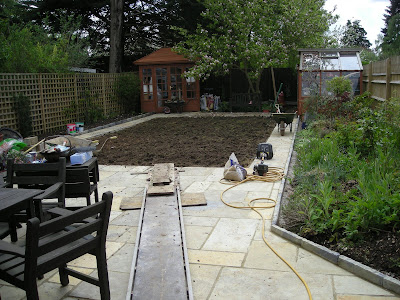 As you can see, taking the paving across the width of the garden makes it look much bigger.
I persuaded my mother to run the path right round the lawn, which avoided having any lawn edges to worry about (you just mow over it), and gave her paved access to every bit of the garden. My sister came up with the idea of having an edging to the beds. 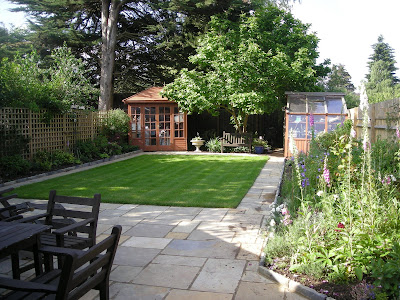 As you can see (between the bench and the summerhouse), we even found a new home for the "funeral urn". The plinth was removed, turned upside down and reused as a planter outside the front door. The urn was planted up with hostas and placed at the back of the garden, where the pale stone stands out in front of the dark fence. 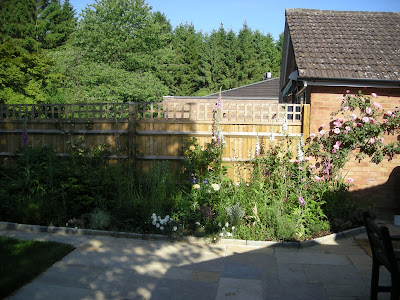 My mother is very good at lots of things, but she is not the best photographer in the world. She didn't even photograph all the replanting I did! But this picture gives you some idea of how the borders look. The aim is to have a kind of cottage-garden, billowy effect which contrasts nicely with the formal rectangular lawn and neat paving.
Of course, I can't take much of the credit for this makeover. My sister and her husband either did or supervised most of the hard work and I came along at the end and tweaked a few plants. My mum is thrilled with it, though - and that's what matters most.
Posted by Victoria Summerley at 10:38 PM