The Big Day: we open the garden

The day did not begin well. On Saturday, we'd basked in a very pleasant 28C (82F) as we made the last, leisurely tweaks to the garden (hiding the rubbish bins in the garage, moving the barbecue and the hose out of the way etc). On Sunday, the day upon which our horticultural attention had been fixed for months - the day we were opening for the National Gardens Scheme; The Big Day - we awoke to a rainforest effect: a kind of steamy haze hanging over London. From deep in the mist came rumbles of thunder.
The rain began as we had breakfast and continued for a couple of hours, leaving the bamboos bent over the terrace, ready to drip all over our visitors. You don't know how much rain bamboo can hold until you accidentally brush against it: it's like having a cold shower. All thoughts of a last tidy-up disappeared, and as a final irritation, a squirrel swinging wildly on one of the bird feeders managed to tip seed all over the terrace.
It was a struggle not to be pessimistic about the weather, and whether it would put people off, but we carried on regardless, icing cakes, and setting out chairs and tables. I'd had a surprise bouquet from Jane, a card from Zoe, and an email from Garden Monkey, all wishing me good luck, so that cheered me up.
The first visitors arrived at 1.45pm. We weren't due to open until 2pm, but we were so glad to see them, we welcomed them with open arms (and dripping bamboo). Visitors are all very different. Some ask lots of questions, others like to go round on their own. Some are jolly, some intensely serious. A couple of early visitors yesterday looked at me with deep suspicion when I introduced myself, so I left them to it. As the day wore on, I found, people became more and more chatty, so that when friends arrived, I hardly had a minute to talk to them and felt very rude.
Last year, I'd forgotten to provide a list of plants, and spent the whole afternoon repeating myself like a broken record as I told people the same information over and over again. This year, I wrote a guide, protected by plastic folders, so people could carry it around the garden with them. Still got lots of questions, though, but that was fine. Many people were fascinated by the heron deterrent, Netfloat, and whether it worked or not (it does). I'd read somewhere, when I built my pond, that herons need a long landing strip, as it were, and that they liked to wade into water, so a raised bed would deter them. It's not true. I've seen a heron descend on the seating area around my pond like a Harrier jump jet coming into land on an aircraft carrier.
The bananas also received a lot of attention as did the Arundo donax, the phormiums and the Montezuma pine. Anna Pavord, in her piece in Saturday's Independent Magazine, said our Phormium tenax was the biggest one she'd ever seen. It's so big people are never very sure whether it really is a phormium.
Some visitors come from miles away and others come from neighbouring streets. It's always lovely to meet people who live locally, not least because you can exchange information about garden conditions, and allotments, and local gossip. Yet others, like Paola, who's from Brazil but now lives in London, I met because she stopped to photograph the bamboo outside the house one day.
During the months of preparation, you tend to forget what fun the opening actually is. It's a bit like a huge party, but instead of having to make small talk to strangers, you have the luxury of being able to spend an afternoon chatting to fellow enthusiasts about gardening - and raise money for charity at the same time. By the time we closed at 6pm, we'd had 120 visitors and raised a total of around £400.
I'd like to say a big thank-you to my husband Craig, who sat in solitary state in the front garden all afternoon selling tickets, to my daughter Nevada, who with her best friends Eliza and Jake served the tea and home-made cakes, to my colleague, Independent on Sunday gardening writer Emma Townshend, who also contributed the most delicious cakes, to Cleve West, who supplied nearly all the pictures below (because for obvious reasons I didn't have time to take any myself), to my stepdaughter Holly, who brought loads of friends along, and to all our friends who supported us not only yesterday but through all the moments of angst over the past months. 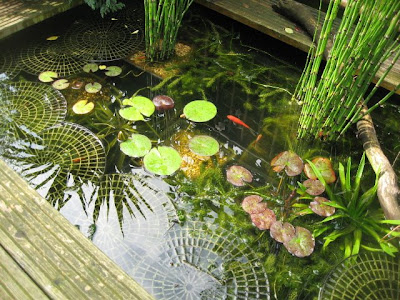 The Netfloat heron deterrent on display in the pond. It consists of plastic rings that link together (you can also cut the centres out to make room for plants if you need to). As the name suggests, it simply floats on the surface of the water, so it's easy to remove if you need to take it out to do some pond maintenance 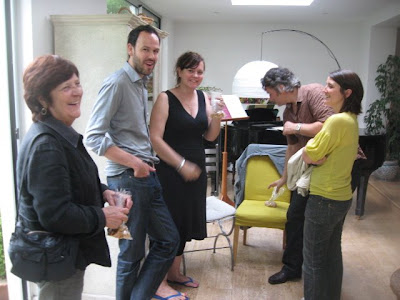 Even if you don't have time to talk to them, it's lovely when friends turn up to support you. From left, Christine, William, Emma T, Matthew and Jane 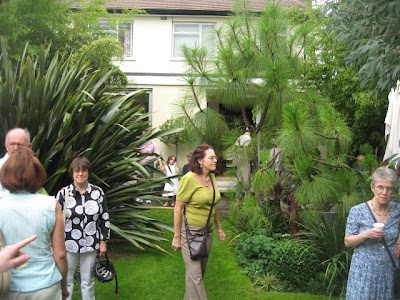 The big phormium to the left of the picture is the one that impressed Anna Pavord, but these visitors seem to be in search of other interesting things... 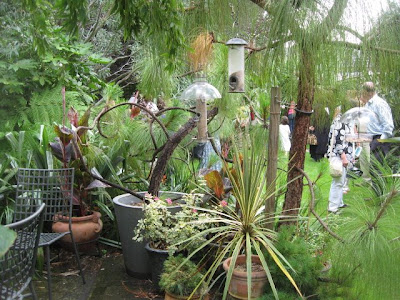 A view of visitors in the garden from the table area. The empty feeder in the foreground is the one the swinging squirrel managed to empty all over the ground 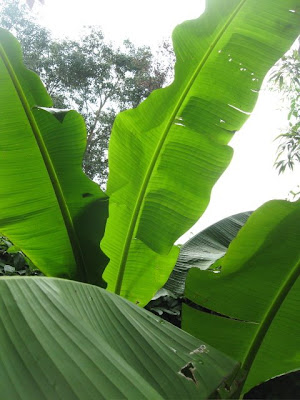 The vast leaves of Musa basjoo, the hardy banana 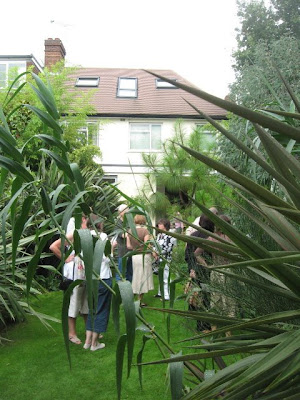 Arundo donax, or giant reed, in the foreground with, beside it, the spiky leaves of a cordyline. 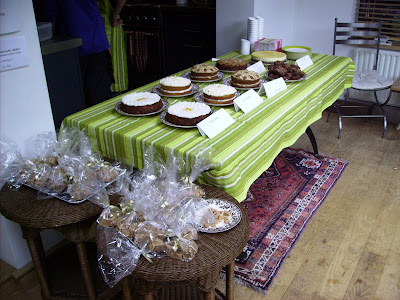 The cakes, a vital part of any garden visit, I think. Craig's homemade tablet is on the table on the left: it proved extremely popular 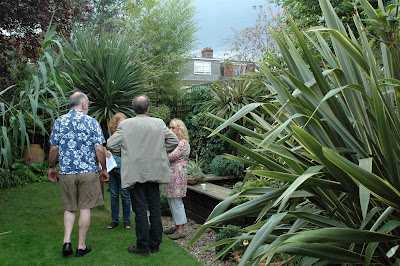 That's me on the right, in the flowery dress. Emma took this picture and very kindly hid most of me behind a visitor. My concession to the weather was not blow-drying my hair, so I look like the Witch of Endor crossed with a Cath Kidston catalogue. By the way, that's not blue sky in the background, but black cloud

Posted by Victoria Summerley at 7:51 AM