I must remember to arrange visitors at frequent intervals next year, because there's nothing like an impending guest to make one scurry round the garden and tidy up. Today, the guest was Rach, of The Big Sofa blog, who lives down the road from me (give or take a few roads) in Tooting. For some reason, probably because her blog is called The Big Sofa, I'd expected someone built along Wagnerian lines, dressed in floral chintz or damask, but in fact Rach is a petite brunette.
She bears absolutely no resemblance to a guinea pig either, but she willingly offered her services as taster for my husband Craig's tablet, a traditional Scottish sweet that tastes a bit like fudge. (Craig is making it to sell at the garden opening.)
It was lovely to meet Rach, not least because she works for Radio Four, to which I am addicted, but also because it is always so nice to have an intelligent conversation with someone about gardening. Let's face it, that's why we all blog, isn't it?
I showed her the garden, and encouraged her to have a pond ("All you need is a half-barrel, Rach!") As if to assist me in my efforts, the frog that lives in my second pond, a huge glazed bowl nearly a yard in diameter, dutifully posed on the edge. Unfortunately, I didn't have my camera at that point, which is a shame because he's an extremely helpful frog. Goodness knows why he prefers that bowl to the big pond, but he does, and he always has at least one froggy friend in there with him. Last year, when the garden was open, he sat all afternoon by the side of his pond, much to the delight of all the children who came.
Rach and I, on the other hand, sat at the garden table, and drank our tea and chatted, and sampled the tablet, and the sun came out, and for a brief moment it seemed as if it really was summer. So thank you, Rach, for a lovely afternoon. 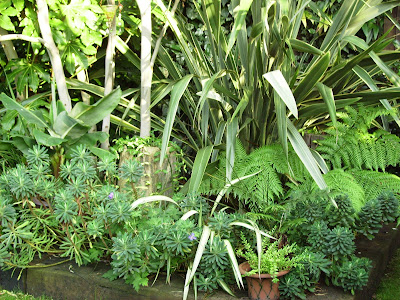 Hidden amongst all this is the frog pond. It's difficult to photograph, which probably means that I should rearrange the planting in some way. Next year... 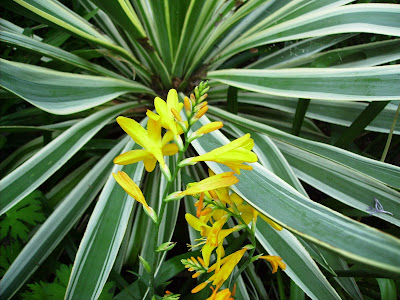 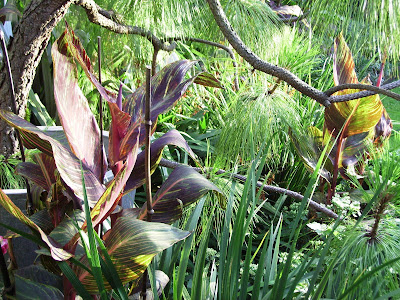 Canna x generalis 'Durban' steps into the spotlight in the early evening sun. The cannas don't need staking; the canes are to stop greedy pigeons landing on them, because they're quite near the bird feeders. I must remember to remove the canes when people come round
Posted by Victoria Summerley at 9:00 PM