The garden doesn't know that it's autumn. The cannas are in full bloom, still dreaming of a long, hot summer, brandishing their spears of orange flowers like a tropical army until they're ambushed in the night by an early frost. Only the wormcasts on the lawn give any indication that the season has changed, because the weather is still the same as it has been all summer: wet, mild, grey.
The long-range forecast offers little respite. As far as I can see, it's going to rain until December. I long for a bright blue sky, for a morning that sparkles with wintry anticipation, a day that makes you sniff the air as your nose tingles with the scent of woodsmoke and bonfires. It's not going to happen any time soon.
Things do change, though. At times like this, when the weather patterns seem out of kilter or just downright depressing, you find yourself making comparisons. What was it like this time last year? How has the garden altered? Did this do better last year? Did that flower earlier? So I thought it would be fun to post some pictures and see. 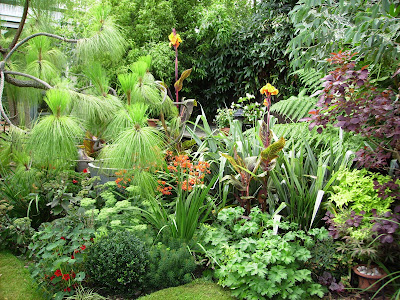 The photograph above is the same one as the one at the top of this blog, taken last August, 2007. I'm sure the crocosmia lasted longer last year. This year they seemed to come and go in a blink-and-you'll-miss them flurry of colour. You can't see a single one in the picture below, which was taken this morning. And last year's red 'Empress of India' nasturtiums made a much more flamboyant show than this year's yellow 'Banana Split'. (I had a bit of a yellow moment this summer.) Was that because of the variety? Or because of the weather? No prizes for guessing which one I'll grow next year. 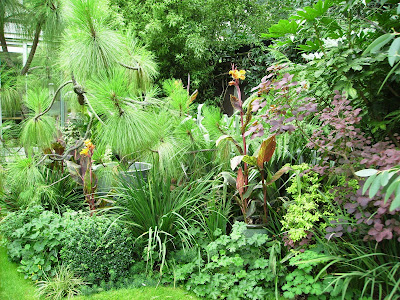 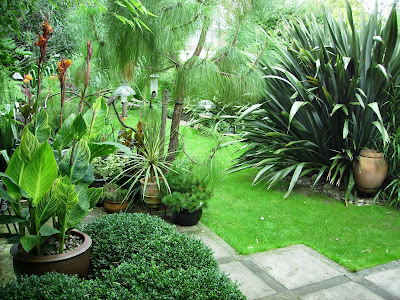 This is a much more dramatic change, because there are five years between the picture above, taken today, and the picture below, taken in the autumn of 2003, the year we moved in. We thought the phormium was big then, but it's even bigger now. And everything looks fluffier somehow. Fluffy is good. 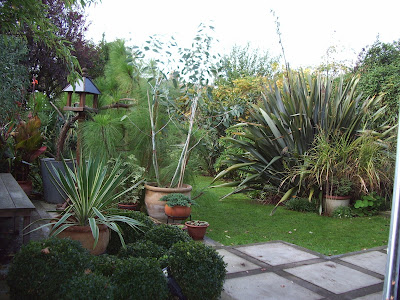 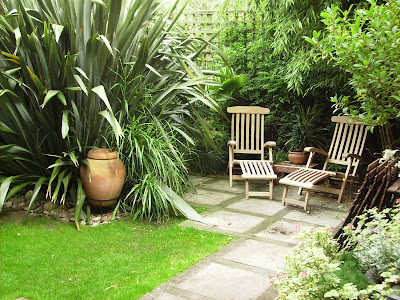 Here's another contrast. The picture above was taken today. The picture below was taken in 2003. Note the absence of sunshine in today's picture. Not to mention the absence of cushions. Just behind these chairs is a tangle of jasmine and Campsis radicans. The campsis is like one of those very cautious motorists who takes 10 minutes to get into first gear when the traffic lights change. By the time it's worked out that it's actually summer, it's usually late September, so we get a brief flourish of gorgeous red-orange flowers before it shivers back into hibernation. This year, we won't get anything because it just hasn't been sunny or hot enough, but it's managed to grow all over everything around it nonetheless. It shows you how little I've been able to sit in the garden this year, because normally it would have been right under my eye, and under control. 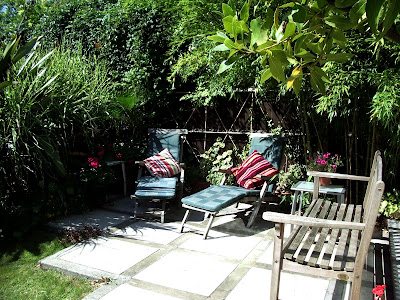 Posted by Victoria Summerley at 9:50 AM