This hasn't really been a summer, but it has been the last summer of the trampoline. I can't quite believe I actually wrote that sentence, because every time I envisage getting rid of the trampoline, I feel a little worm of guilt twist inside me. I know the children will complain. "Mu-u-um," they will whine. "It's OUR trampoline. We play on it. This garden's got too many plants anyway..."
None of these statements is true. It is not their trampoline, we inherited it from the previous owners of the house. They do not play on it (at 14 and 18, they're getting a bit old for it anyway). And the garden, in my view, does not have nearly enough plants. So I am trying not to listen to these pleading voices, but instead making plans for what will go there instead.
I have in mind a kind of chunky pergola. I want it to be chunky partly because I already have lots of railway sleepers in the garden and anything too spindly will look a bit twee. I also want to be able to hang a hammock from it, as a kind of compensation for the trampoline, and the moment I put up a hammock there will be four teenagers in it before you can say "maximum weight restriction".
The tall planting that currently screens the trampoline will be replaced by something lower, probably a mixture of ferns, libertia, hardy geraniums and things that do well in fairly dry shade. The pergola will be like a table without a top, with a support at each corner, braced by horizontal beams. Inside, there will be an area big enough to house a lounger or a small table and chairs, with an entrance to one side through the planting, like a kind of keyhole garden. (I'm indebted to Karen at An Artist's Garden for this last bit of inspiration.)
I mentioned the plan to a couple of people I thought might be able to build it for me, but was greeted with scorn. "Why do you want the supports so big?" said one, after I'd carefully explained why. "It'll look like bloomin' Stonehenge," said the other.
Emmat has managed to find me a henge builder, however. He is called Joe Stubley and he came yesterday to size up Operation Stonehenge. To my great relief, he did not purse his lips. Neither was there a sharp intake of breath or a shake of the head, in classic British workman style. Instead, he said he thought it sounded like an interesting project and he'd be delighted to give it a go. What a lovely chap. I'll let you know how he gets on. 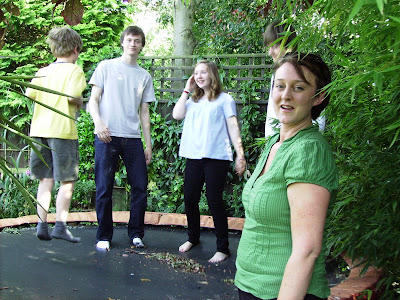 My children plus two friends on the trampoline. The lady in green is our nanny, Lainie, who looked after us all for 12 years and despite that, still drops by to say hello. Lainie is An Angel.
Posted by Victoria Summerley at 5:59 PM