A stroll down Ocean Drive

So, Miami Beach. What a place. It's like an assault on the brain, especially for a pair of sun-starved Brits, wan of face and weary of winter. It seems ludicrous, in hindsight, that I was so stressed about what the weather would be like. My daughter and I were greeted by blue skies and more or less non-stop sunshine - the kind that wraps you in warmth the minute you emerge from the air-conditioned hotel.
Not a day went by when we didn't sit by the pool. And rarely a day went by without me wandering off to take some pictures, only to find that, ten blocks and two hours later, distracted by some piece of architecture or an elegant shop (Hey! A miniature Art Deco Barneys on Collins Avenue!), I was still in my swimsuit and sundress. It only takes a few rays to turn me into a slob.
If you've ever read A Tale of Two Cities, you'll be familiar with Charles Dickens' famous introduction. Since it is his bicentenary this year, I shall bore you with it here:
"It was the best of times, it was the worst of times, it was the age of wisdom, it was the age of foolishness, it was the epoch of belief, it was the epoch of incredulity, it was the season of Light, it was the season of Darkness, it was the spring of hope, it was the winter of despair, we had everything before us, we had nothing before us, we were all going direct to Heaven, we were all going direct the other way."
That pretty much sums up Miami Beach. There is elegance and there is tawdriness, there is beauty and there is sleaze. There is wealth and ostentatious display and there is poverty and squalor.
There is a distinguished history of community action and conservation, and yet a rather chaotic approach to issues such as traffic management and street furniture. There is an astonishing mix of cultures and yet a very traditional American sense of sun, sea and surf celebration.
In short (as Dickens himself was fond of saying), it is like very many other big cities, but with blue skies and palm trees. It's very like London in lots of ways - the person next to you won't automatically be an English speaker, for example. I had to polish up my phrasebook Spanish muy rapido. 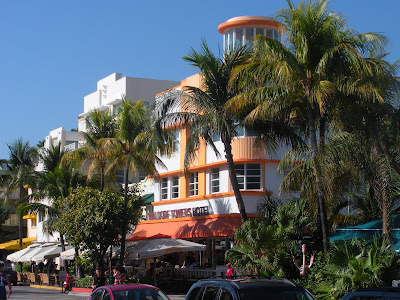 We were staying in a hotel in South Beach, on Washington Avenue, so we were only two blocks from Ocean Drive, where the surf meets - well, surf and turf. Ocean Drive is where people go to see and be seen. It's mainly lined with restaurants, so unless you want to slalom your way through breakfasting tourists and beseeching waiters, it's best to walk on the ocean side, a strip of green called Lummus Park. Beyond that is the beach. 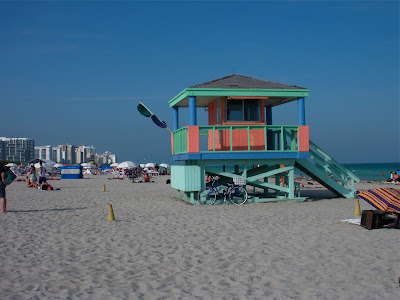 The colours want to make you laugh out loud from sheer pleasure, but I refrained. I saw a notice, below, that stated that Excessive, Unreasonable, Unusual and Unnecessary Noise (their capitals) was Not Permitted. 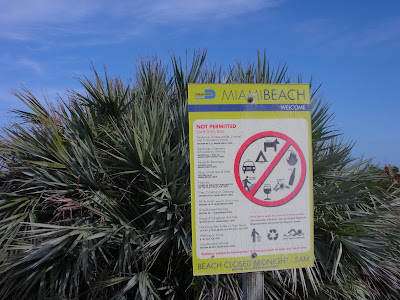 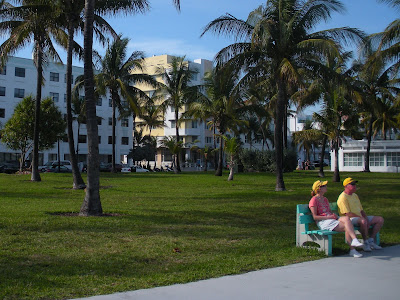 I liked the way this couple's baseball caps pick up the yellow of the Art Deco building in the middle of the picture. I couldn't get a very good shot, however, because they started giving me strange looks. They obviously thought I was indulging in Excessive, Unreasonable, Unusual and Unnecessary Photography. 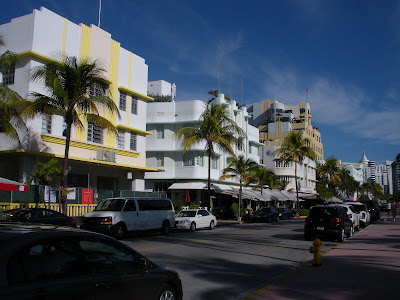 I had to photograph this clock too, to remind myself that it really was February. 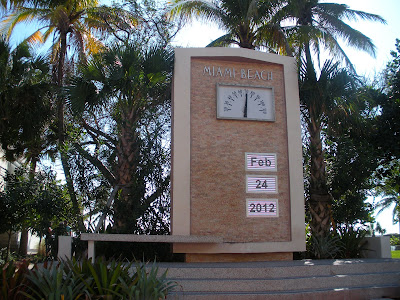 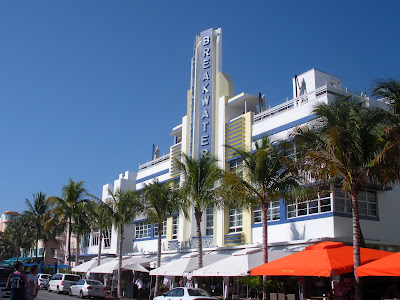 And the architecture lived up to its reputation. To think they nearly pulled all this down! 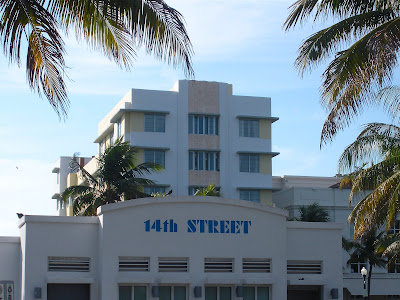 But I did snort with laughter when I saw this bar sign, below. It obviously doesn't mean the same thing in the US of A. Or maybe it does! This is Miami, after all. 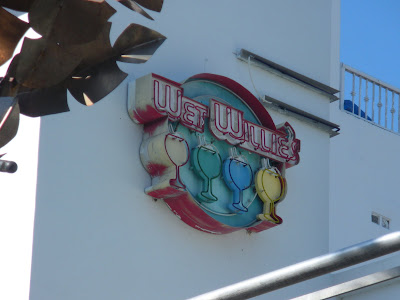 Posted by Victoria Summerley at 5:53 PM