Thanks to Benjamin Vogt, I was recalling the other day that the first time my son saw snow was when he was three years old. We were touring around the south-western USA, and we'd pitched up in Cedar City, Utah just as it started to snow.
Rory, who's now 21, was fascinated and stood in the middle of the street trying to catch snowflakes on his tongue. We were desperate to get into a nice warm restaurant and have a hot meal. He just wanted to eat ice crystals.
In those days, we didn't get snow in London that often. Indeed, only about five years ago, I got rid of our sledge because we never used it - it just hung in the garage gathering dust. Now we get snow every year.
It's always important to make the distinction between a weather event (such as a heatwave, or a snowstorm), and a climatic trend. But it does seem as if our climate really is changing - bearing out this report in The Independent yesterday.
I'm fond of saying I hate snow - I hate the disruption it causes, and the fact that everyone else seems to be able to take the day off while we journalists have to scramble into work somehow. Like the Pony Express, we always get through.
But secretly, I love it - I love that telltale white light after a night of snow, and the peace and quiet that seems to descend on the city.
Anyway, here's the picture of the garden. 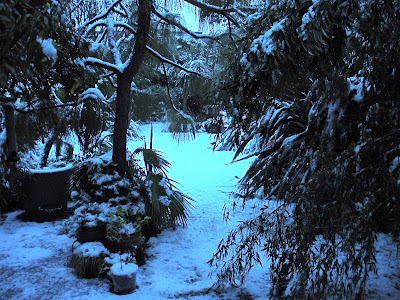 Posted by Victoria Summerley at 1:44 PM