The apple never falls far from the tree... 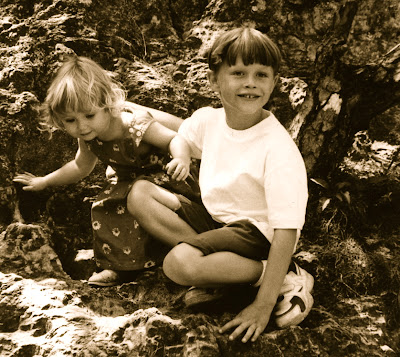 My children aged three and seven, on holiday in the Cevennes, in southern France
Families always love to identify similiarities between children and the rest of the clan. "Oh, she has Grandma's nose", they'll say, or "He looks just like Grandad did when Grandad was a baby".
My family are particularly bad at this. They draw comparisons where I can see absolutely none at all, and yet resolutely refuse to entertain the possibility of any likeness that is not an accepted part of family lore.
For example, my younger sister is very fond of saying that my son is like our brother. To me, he looks absolutely nothing like my brother. But he does look quite like my uncle, my mother's brother, and when he's standing next to my cousins, this family similarity is very obvious - to me. But not to anyone else.
The most notorious example of this "likeness resistance" came when my mother found an old photograph of my great-grandmother. I was about 16 at the time, and for some reason we were rummaging through some old family photographs (as you do). "Goodness," said my mother, "look at this photograph of Grandma as a girl. Doesn't it look like Victoria?"
"Don't be so silly, Denise," said my grandmother, reprovingly. "My mother was considered a great beauty!" (It is yet another tradition in my family that I am the ugly duckling.)
I'm quite glad that my children don't look like me (at least, I don't think they do). For me, one of the most fascinating things about having children is spotting the differences between you. I love that sense of surprise and delight you get when you discover your children can do something you can't (such as add up (ahem), or hit a ball with a bat).
And I'm rather against the idea that they can't display any kind of talent or creativity without having this skill instantly attributed to some dusty ancestor. Surely they deserve some credit themselves?
So where did I stand when I discovered that - like me - they both had blogs?
My son's blog is about video games, and you can find it here. He's been writing it for quite a while, and has more than 100 followers.
My daughter has just started her blog. She has been diagnosed with glandular fever, which means weeks of rest at home, and she wanted something that would stop her going mad with boredom. Her blog is about classical music, and you can read it here.
Neither of my children want to be journalists. Neither wanted to study English literature at university. My son, indeed, would protest loudly at the mere idea of having to put pen to paper throughout most of his time at school.
Yet here they are, writing about the subjects that most enthuse them. Do they get that from me? Or is blogging simply the response of any intelligent person with a healthy curiosity about the world around them? I like to think it's a bit of both.
Posted by Victoria Summerley at 11:19 PM