Sick as a parakeet

"Sick as a parrot" was a popular phrase in English football (not soccer, please - the game is called football in the UK) during the 1970s and 1980s. It was memorably used by Liverpool's Phil Thompson in 1978, after his team were beaten in the cup final by Notts Forest.
It means - as you can imagine - that one is not too happy with life. (Thompson had committed a foul which led to Forest being given a penalty, which won them the game.) The opposite is "Over the moon", which was also a popular phrase with footballers and football managers.
No one is entirely sure where the phrase came from in the first place. Several origins are suggested, which I won't bore you with here. And these days Premier League footballers seem fonder of using racist abuse than eccentric catchphrases.
But I think if anyone can be said truly to look as sick as a parrot, it is these disgruntled parakeets in my garden this afternoon.
It's very cold here for London - it was -5C when I went out first thing this morning and we're expecting snow tonight. So the garden is full of birds hanging around, waiting to fill up at the bird feeders.
Ring-necked parakeets are naturalised all over south-west London - there are loads of them, and they like to flock together. So it's not uncommon to see four or five sitting in a tree, or screeching overhead, or gobbling up the food in the feeders as fast as I can fill them. 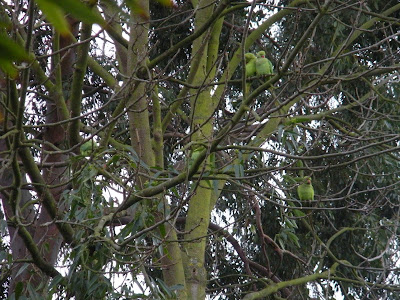 Posted by Victoria Summerley at 2:38 PM