I haven't been feeling very well for the past few days, so this morning - my day 0ff - I decided that I needed a, some fresh air; b, to get away from everyone and c, to think about something other than work and what to buy at the supermarket.
So I switched off my phone, jumped in the car, and went to Wisley, the Royal Horticultural Society's garden in Surrey, which is about 25 minutes drive away.
I have a bit of a love-hate relationship with Wisley. I love Wisley, but I hate having to share it with hordes of people. Unreasonable and intolerant, I know, but there you go. Today, it was busy. Very busy. There was a craft fair taking place this weekend, the existence of which had slipped my mind until I arrived in the overflowing car park. Dang!, I thought. (Except I didn't spell it that way.)
Anyway, my mission was to photograph the Tom Stuart-Smith borders around the Bicentenary Glasshouse, so I stomped off in search of autumnal vistas and other visual delights. 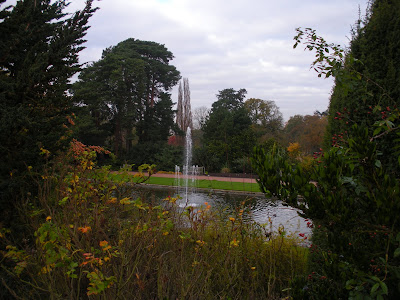 Wisley looks good at any time of year, but in autumn it can look spectacular. I'd never noticed before that from this angle, the fountain in the Long Pond echoes the shape of the tree in the distance. (Swamp cypress, perhaps?) 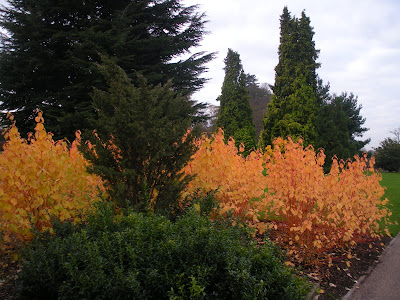 The cornus still have their leaves on, but you can see the bright stems underneath, which heightens the effect. This one is called 'Midwinter Fire' - and you can guess why. 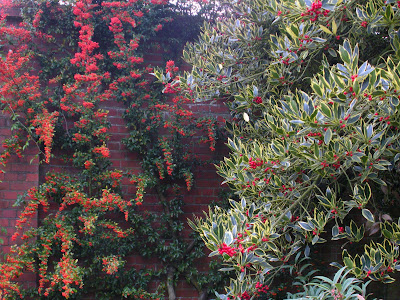 The low light of winter makes rich colours, such as these pyracantha and holly berries, really glow. That's one of the great benefits of living this far north - the light is constantly changing, from season to season, from day to day, hour to hour. These colours might look garish in late spring or midsummer, but at this time of year, they are rich and jewel-like. 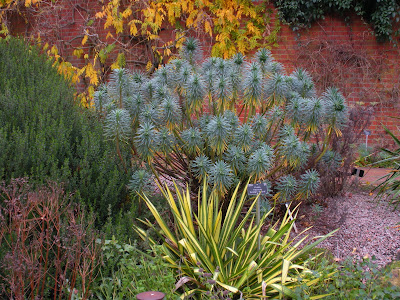 But even cool colours, such as the blue-green of these euphorbia, can light up the border, especially if placed next to spectacular autumn foliage, or this Yucca filamentosa 'Garland's Gold', with its intensely rich yellow variegation. 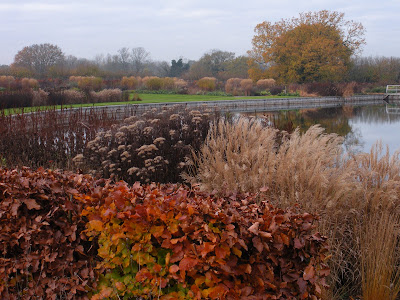 Anyway, to the Glasshouse borders. I'm fascinated by these. It's not often that we get the chance to see such a large area of planting take shape, from bare earth just four years ago, and this is a huge site - two hectares (or nearly five acres, in old money). The borders begin at the entrance to the Glasshouse, and sweep round to the western side, where there are two areas of prairie planting, designed by Professor James Hitchmough of Sheffield University.
At this time of year, the two blend seamlessly together, thanks to the extensive use of grasses and prairie-type perennials such as helenium, veronicastrum and echinacea in the Stuart-Smith borders. 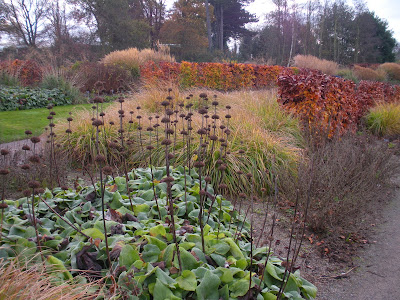 Phlomis russeliana is another favourite, its seedheads popping up like exclamation marks above the misty hummocks of grass. 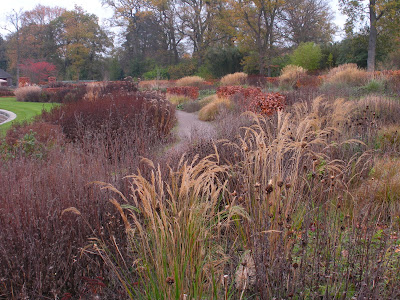 To me, this is clever, clever planting. Choosing plants that keep the structure of the borders going right into winter takes real skill. I just could not get tired of looking at it.
They look wonderful in summer of course - but late autumn allows you to see how the hummocks and humps of grasses - whether they are low-growing festuca or statuesque miscanthus - echo the billowing shapes of the trees and the landscape beyond.
The occasional explosion of orange beech leaves from the intermittent hedging around the lake picks up the vibrant foliage of a distant tree flaunting its autumn colours. 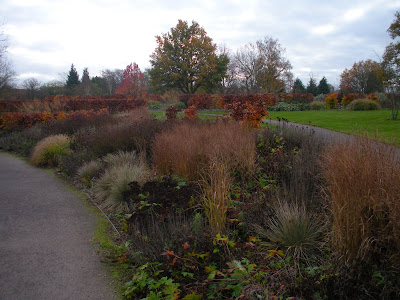 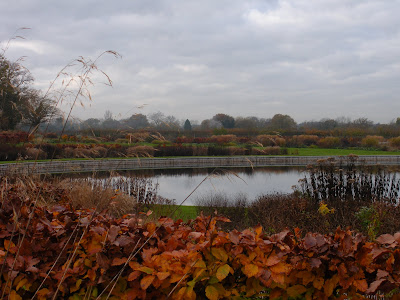 I tend, from time to time, to suffer from the delusion that I am the next Garden Photographer of the Year. Goodness knows why, because I only have a point-and-shoot, I have absolutely no idea what ISO stands for and the nearest I have come to photographic greatness is standing next to Derek St Romaine at the Chelsea Flower Show.
I love the process of going out and taking pictures of gardens, however, so I was really looking forward to my stint at Wisley today. I was down there last week, with my mother, when the Glasshouse borders were glittering and shimmering in the sunshine. Naturally, I'd forgotten my camera, so I'd vowed to go back as soon as I had a minute.
The weather, and my camera, had other ideas. I kept hoping the sun would break through, but it sulked behind a cloud for most of the morning. Whenever it looked like it might make an appearance, the dodgy battery in my camera would give up, at which point the air around me turned blue, and the sky remained resolutely grey.
Three times, I gave up and walked back round the gardens to the cafe in search of a cup of tea.
Three times the sun came out again just as I reached the cafe, at which point I scampered back to the Glasshouse borders (about half a mile away). Each time the sun disappeared by the time I got back there.
Eventually, the mummies with pushchairs - of which there are many at Wisley - were beginning to give me funny looks and tell their offspring to "hold onto the pram, darling". I think it was all the swearing.
Posted by Victoria Summerley at 6:16 PM