An admirer of abelia

There are many plants that boast many good points, yet somehow fail to make my heart beat faster. Abelia x grandiflora is one of these. It has glossy leaves that have shades of red and copper, it's semi-evergreen, it flowers for ages - from summer until late autumn - and while it makes a fairly big shrub, it doesn't make you feel as though it's trying to crowd you out of the garden. It's fluffy rather than forceful.
For me, however, it falls into the category of supporting act. While it may have fragrance, and look quite pretty, there's nothing really distinctive about it that would justify pulling it out of the corps de ballet, as it were, and raising it to the rank of ballerina.
A very quick flick through the multiplying piles of gardening books on my shelves (do they breed, do you think?) found only a couple of mentions. Stephen Lacey, in his very readable book Real Gardening, calls it "a stalwart background shrub of the season" (he's talking about autumn).
So I was astonished, when wandering round the Penelope Hobhouse garden at Wisley, to find that this despised Cinderella was the flamboyant beauty that had caught my eye as it frothed around a stone bench at the far end. 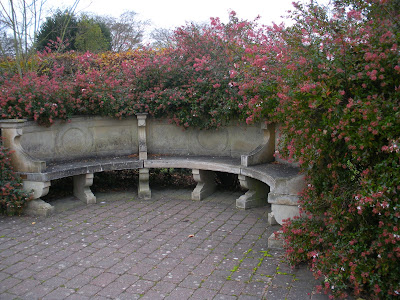 Of course, you need a large garden to give it this sort of treatment. But what an imaginative piece of planting. And what a sensible choice, given the long flowering period, the fragrance and the fact that you need to be up close to appreciate the pretty little trumpet flowers. Most people would go for roses, or something formal and evergreen, such as yew or perhaps choisya. 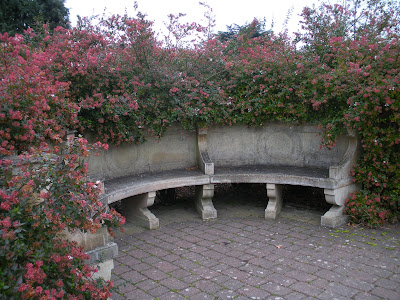 How nice to have one's prejudices turned upside down. And how wonderful to see this shrub flowering away in early December. 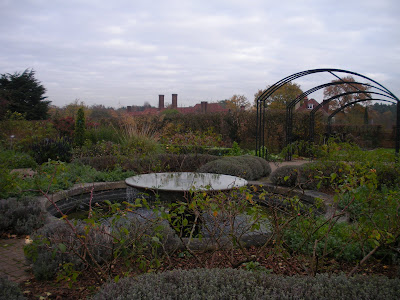 This is how the rest of the Hobhouse garden looked this week. As you can see, there's still lots of interest, even at this time of the year - thanks to the very mild autumn we've had in the south-east of the UK. I love the view of the mock Tudor brick chimneys in the distance. They give a rather cosy, domestic scale to the garden - although they actually belong to the laboratory building where the RHS plant pathology team are based.
Posted by Victoria Summerley at 7:23 PM