There was an appeal to gardeners the other day from the Royal Society for the Protection of Birds, who wanted people to stop ripping out, or cutting back, ivy. Ivy flowers at this time of year, providing a much-needed source of food for late-flying insects and birds.
There are gardeners who see ivy as a sort of pernicious weed, to eradicated wherever possible in case it pulls down the house or the fence, or kills a tree. I rather like it, particularly the cultivars with golden variegation, but there are other plants that provide nectar and pollen at this time of year.
Fatsia japonica, which, like ivy, is a plant many people despise, is also in full flower right now, and in my garden, this autumn has been a spectacular season for it. The flowerheads are huge, fluffy flamboyant affairs, which are great for flower arrangements (they look even better while they're in bud).
I always think fatsia looks better from above, when the shapes of the leaves are easier to see, so it's a great plant for a dry, shady basement area, or a lower level of the garden. 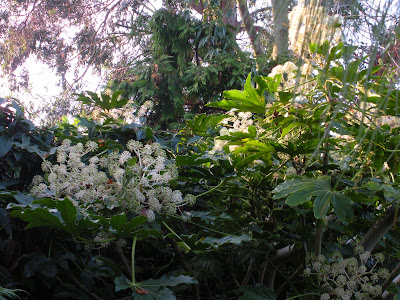 It's odd that the plants which provide solutions to common gardening problems, such as dry shade and late summer colour, are often the plants at which people tend to turn up their noses.
Personally, I find fatsia, and its cousin, Fatshedera lizei - a cross between fatsia and English ivy, Hedera helix - invaluable background plants, so it's nice to see them enjoying their moment in the sun.
You can use fatshedera instead of ivy as a climber, if you want something a little less invasive. It has large showy leaves and the same fluffy flowerheads, but it doesn't have aerial roots that cement themselves to a wall or fence. The branches, with their clusters of glossy leaves, can become quite heavy and snap, so it needs to be tied to a trellis or support.
Fatsia, of course, is completely self-supporting - this one in my garden, below, is approaching the size of a small tree. Planted in the ground, they will tolerate pruning, shade and drought. You can grow them in containers (and mine has a habit of self-seeding into any pots nearby) but this hugely reduces their ability to survive quite tough conditions. 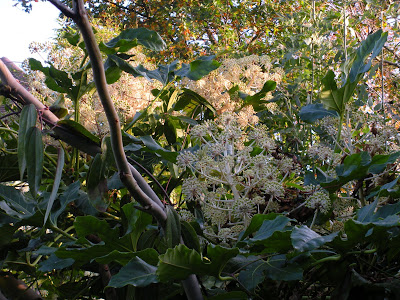 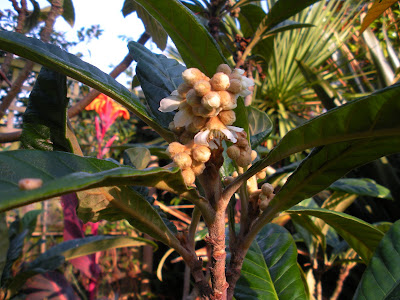 Another plant that provides late autumn flowers and fragrance in my garden is the loquat, or Eriobotrya japonica, which is a favourite with late-flying butterflies such as Red Admirals. It's hardy throughout most of the UK, and the flowers have a lovely almond fragrance, like marzipan. It prefers a sheltered spot, and full sun. In a mild winter, it may even produce fruit, but these probably won't ripen and you'll end up with something that tastes like a sour apricot.
Garden Bloggers' Bloom Day is hosted on the 15th of each month by the lovely Carol at May Dreams Gardens. Head over there to see what's blooming in Carol's Indiana garden, and to check out GBBD posts from around the world.
Posted by Victoria Summerley at 10:17 AM